Get This Book
Visit NAP.edu/10766 to get more information about this book, to buy it in print, or to download it as a free PDF.
« Previous: Front Matter
Page 1 Share Cite
Suggested Citation:"ARTHUR P. ADAMSON." National Academy of Engineering. 2015. Memorial Tributes: Volume 19. Washington, DC: The National Academies Press. doi: 10.17226/21785.
× 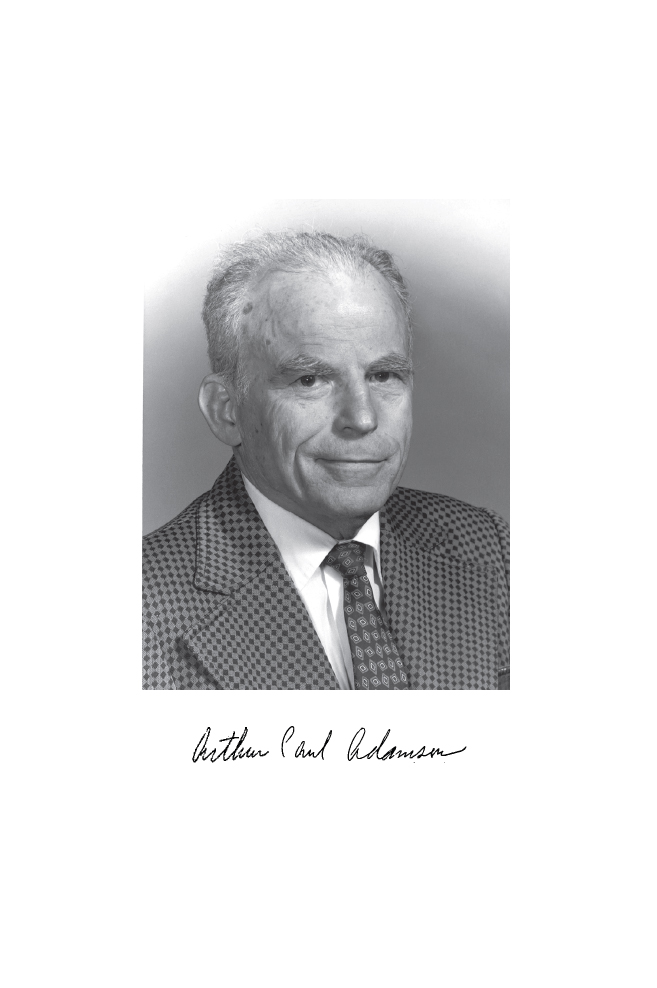 “Creativity, inventiveness, and engineering in the design and development of aircraft gas turbine and other engineering apparatus.”

ARTHUR PAUL ADAMSON died at age 95 on May 3, 2014, in Philadelphia. He leaves behind a unique legacy at General Electric and in the world of aviation.

Art was born March 14, 1919, and raised in rural Kansas, where he was educated in a one-room schoolhouse. Engines and machinery were part of his life since his boyhood on a farm in Coffeyville, Kansas. He said he never had a doubt that he would become a mechanical engineer. “Farm boys always know a lot about machinery,” he said. “I like airplanes in particular. The engines are more fun than anything else.”

It wasn’t long before he succumbed to the call. After high school, he spent two years at a junior college in Coffeyville before packing his bags in 1939 and heading for Los Angeles. He moved in with his aunt and enrolled in the University of Southern California’s mechanical engineering program, supporting himself with summer jobs in an aircraft plant and a part-time job in the engineering school’s mechanical engineering lab. Sydney Duncan became his favorite professor; Thomas (“Pop”) Taylor Eyre, then chair of the Mechanical Engineering Department, was his inspiration. He graduated at the top of his class in 1941.

Philadelphia and then Schenectady. He also enrolled in GE’s advanced technical training program, which allowed him to move into technical leadership positions. This was the beginning of his four-decade career at General Electric, where he left a remarkable, long-lasting legacy.

In the late 1950s he became a technical leader on GE’s lift fan program and manager of the J85 engine program. He took a young Brian Rowe under his wing, and Rowe recalled him as “probably the most intelligent person working” at GE Aviation.

When the US Army awarded the GE12 demonstrator program in 1967, Art led the team on the radically efficient design. This led to a production contract in 1972, and the GE12 became the first version of the T700 helicopter program—still going strong with more than 15,000 engines in service. He also helped develop the TF34 family of turbofan engines used in the Navy’s antisubmarine aircraft, the Warthog, and in regional commercial passenger jets.

In 1955 he moved to Evendale, Ohio, a suburb of Cincinnati, to oversee rocket engine development. In 1959, while the country scrambled to catch up with Sputnik-era launch capabilities, he became chief engineer of the Vanguard rocket engine program. A successful launch powered the first satellite into an Earth-orbiting trajectory on 24,000 pounds of thrust.

“His creative genius led to several aircraft engine programs,” said USC classmate and fellow GE engineer Robert Hoffman, a resident of Redwood City, California. “One of them was the XV-5A lift fan for vertical launch, high-speed helicopters. That was a very rewarding program and a great vehicle to see take off.”

In 1967 GE Aviation was determined to reenter the large commercial engine market in a big way. The company turned to Art to lead the initial CF6 engine development effort, based heavily on the TF39 military engine. Rowe soon led the CF6 project and worked closely with his engineering mentor, leading to the successful launch of the initial CF6-6 on the DC-10.

But the CF6 really came into its own with the higher-thrust CF6-50. And again Art Adamson played a central role: he

created the design concept that enabled the CF6-50 to grow in thrust while keeping the turbine temperatures manageable. As Rowe later said, the CF6-50 would not have been possible without Art and his design team.

In the 1980s Art led the design team that created GE’s ultra-high-bypass unducted fan (UDF) engine and became the “father of the UDF.” The engine was a revolutionary concept that addressed the needs for low fuel consumption in the industry. Art’s team designed this new propulsion system in cooperation with SNECMA of France. The team demonstrated its performance in flight tests on the Boeing 727-100 and MD 80 aircraft. When fuel prices dropped, interest in the fuel-efficient UDF engine waned and the unique engine never entered airline service. The concept, however, is being revived today in advanced studies at NASA and in the Clean Sky program in Europe.

Art’s technology innovations on the program were extraordinary. For example, without the composite fan blades developed on the UDF, it is unlikely that the GE90 ultra-high-bypass ratio engine for the Boeing 777 airplane would have seen the light of day. He and his team were awarded the Collier Trophy for their achievements.

Art retired from GE in the late 1980s but continued for many years as a consultant. In 1989 he was inducted into GE Aviation’s Propulsion Hall of Fame.

Few engineers have influenced the jet propulsion industry as Art Adamson. And he enjoyed more than most sharing his creativity and wisdom with those around him. His years as a consultant at GE were invaluable. He participated in “technical circuses,” which are technical reviews of newly developed products; his comments were few and to the point. When Art spoke, we all listened.

the development of the CF6-50 Commercial Jet Engine”; and SAE’s Franklin W. Kolk Air Transportation Progress Award for service to aviation (1985). He was elected to the National Academy of Engineering in 1980, a recognition that he highly deserved.

Art had multiple interests when he was not working; he was a devoted husband and father as well as an avid downhill skier, tennis player, world traveler, wood carver, and prolific reader. He was married for 59 years to the late Florence (Smith) Adamson, of Schenectady, and is survived by son David Adamson, daughter Judith Adamson, five grandchildren, two great-grandchildren, brother Charles Adamson, and five nephews and five nieces.

He will be greatly missed.

Next: LEO R. BEARD »
Memorial Tributes: Volume 19 Get This Book
×