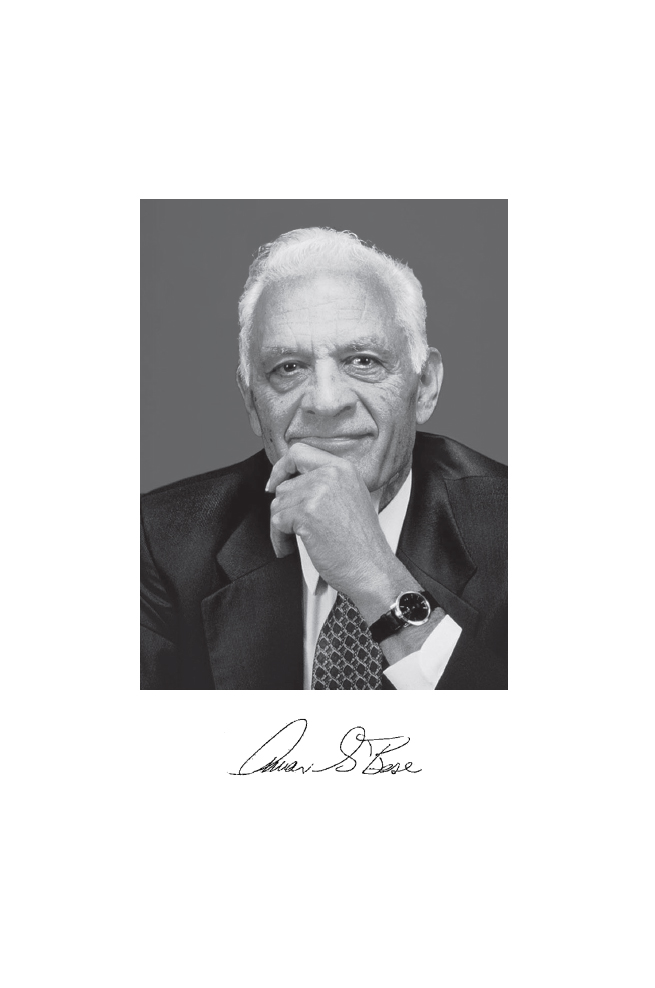 “For innovation and leadership in the science and engineering of sound reproduction, and for excellence in engineering education.”

AMAR GOPAL BOSE, chairman of the board and technical director of Bose Corporation, and professor emeritus of electrical engineering and computer science at the Massachusetts Institute of Technology, died on July 12, 2013, at the age of 83. He was born on November 2, 1929, in Philadelphia.

Dr. Bose received his bachelor’s and master’s degrees in 1952 and his ScD degree in 1956, all in electrical engineering from MIT. He was elected to the National Academy of Engineering in 1987. Throughout his career he received many awards and recognitions as an educator, inventor, researcher, and entrepreneur. He holds numerous patents in the fields of acoustics, electronics, nonlinear systems, and communication theory.

In 1956, as a member of the MIT Department of Electrical Engineering and the Research Laboratory of Electronics, Dr. Bose began a research program in physical acoustics and psychoacoustics. Much of his early interest in these areas stemmed in part from his passion for classical music and his disappointment in available sound reproduction systems. His research led to the formation of Bose Corporation in 1964. The associated patents provided the foundation for the company’s consumer products—home entertainment systems; automotive sound systems; noise reduction headsets and headphones

for the military, pilots, and consumers; and professional sound systems for commercial applications and for musicians.

Dr. Bose had a lifelong love of cars, particularly those with interesting technology. In 1956 he bought a Pontiac Bonneville with the first air suspension, and in the 1960s a Citroën with its revolutionary inverted wing under the car which provided tremendous traction at high speeds. It was inevitable that this love eventually combined with his research interests and led to the development of not only the Bose suspension system for vehicles and truck seats but also biostent medical testing devices.

In his mentoring at MIT and Bose Corporation Dr. Bose typically placed more weight on his belief in the individuals and their passion for the ideas they were pursuing than on the specific details of the idea. He understood that the kernel of an idea in the hands of an enthusiastic person with insatiable curiosity would follow an exciting path to new and creative results.

Throughout his research career at MIT and at Bose Corporation, he often pursued ideas that were controversial and that others felt were impractical. Consistent with his penchant for challenging conventional wisdom, engraved in a glass wall outside his company office is a quotation by the Belgian Nobel Laureate Maurice Maeterlinck: “At every cross-way on the road that leads to the future, each progressive spirit is opposed by a thousand men appointed to guard the past.”

His devotion to and belief in the importance of long-term research is embodied in the Bose Corporation mission statement, “Better Sound Through Research.” By keeping the company private, he was able to maintain this research philosophy and discipline as the company grew from a startup to a worldwide corporation with over 10,000 employees and over $3 billion in annual revenue.

As just two examples of his long-term horizon in research, the Bose Wave radio was in development for 12 years before it became a consumer product. And the company’s noisecancelling headphones lost money for a decade before turning into a profitable product.

In a 2004 interview in Popular Science magazine Dr. Bose is quoted as saying “I would have been fired a hundred times at a company run by MBAs. But I never went into business to make money. I went into business so that I could do interesting things that hadn’t been done before.”

As a faculty member at MIT, Professor Bose was legendary. His classroom technique was masterful, and characterized by extraordinary standards—he expected the same of both the students and his teaching staff. He also invested considerable effort in the mentoring of students on his teaching staff, many of whom, inspired by him, went on to highly successful teaching and research careers.

Professor Bose had an extraordinary ability in the classroom to inspire, to mesmerize, and to convey complex material in eloquently simple ways. His course on acoustics was affectionately renamed by the students “Acoustics and the Philosophy of Life” and many students took it as much for his philosophy, insights, and anecdotes as for his elegant presentation of the complex technical aspects of acoustics.

On his induction into the National Inventors Hall of Fame in 2008 he said: “Research and teaching are two top professions that I have enjoyed the most. Management is the profession that I enjoy the least but realize that it’s very, very important because people are the ingredient that makes everything possible. If you can motivate these people highly, the results are phenomenal.”

Dr. Bose’s favorite hobbies were badminton and research. He started playing badminton as a student at MIT and played every Sunday with an MIT community group for many decades. Later, he looked forward to spending time every winter in Hawaii, where he played badminton with a group from the University of Hawaii and could spend much of his free time on new research pursuits.

Amar Bose was extraordinary in his pursuit of excellence, his exceptional values and standards, his gifted leadership, his commitment to mentoring, and his courage and creativity in research. He often commented that as a teacher and mentor you influence an endless succession of generations. There is no

doubt that through his teaching and mentoring at MIT, at Bose Corporation, and worldwide, his impact will live and expand forever. I personally miss him deeply as do many thousands of others. Meeting Professor Bose for the first time in 1960 was a life-changing event for me and I am so profoundly grateful for all that he taught me in the many decades since.

Next: SIDNEY A. BOWHILL »
Memorial Tributes: Volume 19 Get This Book
×