Get This Book
Visit NAP.edu/10766 to get more information about this book, to buy it in print, or to download it as a free PDF.
« Previous: DONALD O. THOMPSON
Page 295 Share Cite
Suggested Citation:"HARDY W. TROLANDER." National Academy of Engineering. 2015. Memorial Tributes: Volume 19. Washington, DC: The National Academies Press. doi: 10.17226/21785.
× 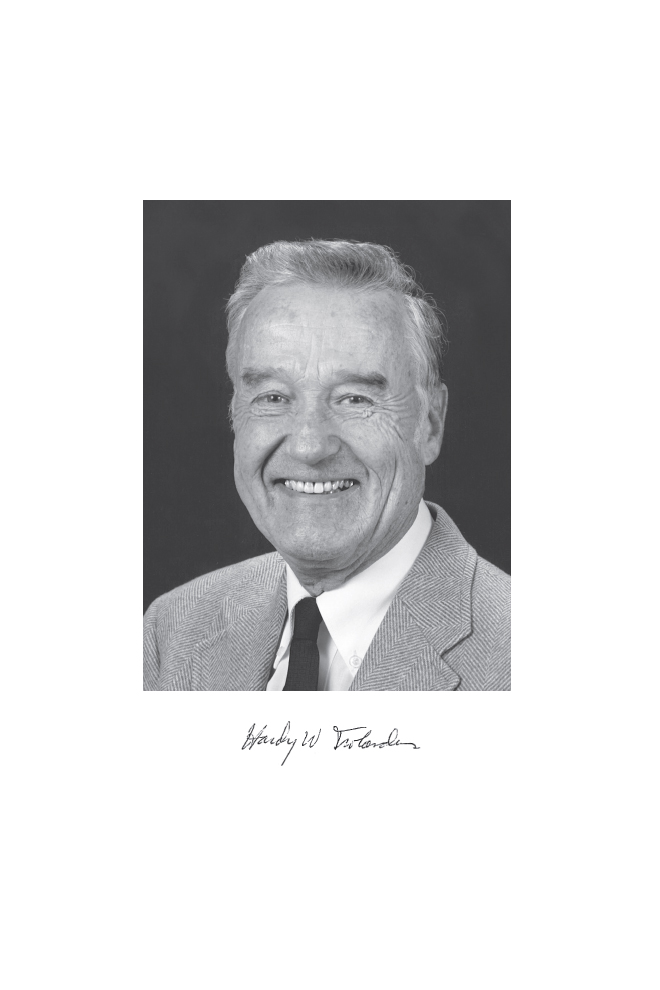 “For creative development of precision sensors for medical and industrial applications and leadership in worldwide commercialization of these products.”

BY ANITA BROWN
SUBMITTED BY THE NAE HOME SECRETARY

HARDY WILCOX TROLANDER, retired CEO of YSI Incorporated, died at his home in Yellow Springs, Ohio, on October 11, 2013. He was 92 years old.

He was born on June 2, 1921, in Chicago and grew up on the South Side during Prohibition. His father was a chemist and his mother a former office manager. At a young age, Trolander started taking things apart; he tinkered with radio electronics he’d garnered from neighbors’ basements and clandestinely experimented with public street lights and railroad crossings. He was educated in the Chicago school system and graduated from high school in 1939.

He began his college studies at Purdue University, but transferred to Antioch College in Yellow Springs after his freshman year. In Antioch’s work-study program, he was employed by the Museum of Science and Industry in Chicago and later at the Sperry Gyroscope Company’s radar laboratory in Garden City, New York, where he worked for Russell Varian, inventor of the Klystron tube.

He enlisted in the Army Air Corps in early 1942 and in 1944 received his commission as a communications officer from the Air Corps Officers School at Yale University. He was assigned to fly unescorted single plane missions along the coast of Japan

to locate Japanese radar installations, but was relieved of duty after the first nuclear bomb was dropped.

He returned to Antioch and graduated with a BS in engineering in 1947, and remained as a temporary instructor in physics and engineering for a year. During that time, he approached two of his former Antioch classmates with the notion of starting an engineering laboratory. Yellow Springs Instruments Company, later YSI Incorporated, was founded in the basement of the Science Building at Antioch College, with Trolander serving as its first president and CEO starting in 1948.

Among YSI’s early developments was a very accurate camera timer developed for the Air Force. To achieve the necessary accuracy at its highest setting, 0.005 percent, Trolander conceived of a form of early computer circuitry using vacuum tube flip-flops and stepping relays. Today it would be characterized as a 16K ROM with onboard crystal clock and heavy-duty input and output gates, but in 1950 some of these terms were yet to come into use. The YSI timers were used in the training of Air Force bombardiers.

Trolander’s next important development was in 1952 when he and Leland Clark Jr. conceived the telethermometer, the first practical medical electronic thermometer. His subsequent invention of a process for tightening the tolerance of thermistors used as sensors for the thermometers to better than 0.1 degrees became the major step in ensuring their acceptance.

In 1958 he invented and patented the precision interchangeable thermistor, which he considered the most important of his inventions. Described as a method for producing close tolerance uniform thermistors for the measurement of medical and biological temperatures, the precision interchangeable thermistor solved the variation problem previously inherent in thermistors, making it practical for commercial applications. It became the breakthrough needed to make thermistor technology important in medicine, medical and biological research, and a wide variety of scientific and business applications.

Other inventions followed, including an n-term electrical network in 1967 that made use of two or more nonlinear

thermistors to achieve a highly linear response from the nonlinear elements. With this invention, Trolander became one of the first American inventors to be awarded a Russian patent.

In 1978, almost 20 years after first noticing an apparent inconsistency between the behavior of thermistors and their accepted theory, he conceived of a new form of their structure that involved glass encapsulation. This new form improved their long-term stability by more than an order of magnitude.

Trolander believed that measurements were the “ultimate truth,” and he was confirmed in this belief through his work with engineering scientists all over the world. No matter the government, religion, or culture, a measurement could be agreed upon by very different people.

He worked with Leland Clark on the process for measuring dissolved oxygen in liquids that enabled open-heart surgery and the first heart-lung machine, which led to YSI’s in-house development of biosensors. The Model 23-A was introduced in 1975 for the measurement of whole blood glucose and incorporated the world’s first commercial biosensor. It has been recognized by the Chemical Heritage Foundation as one of the top 50 instruments that “changed the world in the 20th century.” It and subsequent designs are still recommended by the US FDA as the reference standard for measuring glucose.

Trolander considered inventions incomplete until they were developed and manufactured as useful, affordable, and high-quality products. He took great pride in helping determine the official melting point of gallium, which was adopted in 1990 as a primary point on the International Temperature Scale.

He was part engineer, inventor, businessman, and civic leader. A big believer in the social benefits of meaningful, economically viable work, he also advocated for corporate responsibility throughout his career, and was proud of YSI’s early personnel policies based on trust. Under his leadership, the human side of enterprise was given a high priority at YSI, where many progressive concepts were pioneered, such as aggressive employment of minorities, group and individual flex time, and the removal of time clocks for recording employee attendance.

Trolander retired in 1986 after nearly 40 years as YSI’s first president, having seen the firm grow from three employees in a small rented college laboratory to an employee-owned company with 400 people working in plants in Yellow Springs, New Mexico, and Japan. He stayed on as chair until 1990.

His leadership was visible through many affiliations, including board memberships with the International Institute for Medical Electronics and Bioengineering (founder), Bioinstrumentation Advisory Council of the American Institute of Biological Sciences, International Organization of Legal Metrology, National Bureau of Standards (now the National Institute of Standards and Technology), Engineering and Science Foundation of Dayton, Dayton Engineers Club Foundation, Foundation for Skeletal Health Antioch College, Miami Valley Regional Business Innovations, Yellow Springs Community Foundation (cofounder), and American Civil Liberties Union. He was elected to the National Academy of Engineering in 1992.

Trolander’s wife, Imogene, predeceased him. He is survived by daughters Megan Trolander and Pati An, grandson Noah Trolander An, son-in-law Jim Spangler, and his final sweetheart, Bev Price.

Next: LELAND J. WALKER »
Memorial Tributes: Volume 19 Get This Book
×