Get This Book
Visit NAP.edu/10766 to get more information about this book, to buy it in print, or to download it as a free PDF.
« Previous: John D. Caplan
Page 48 Share Cite
Suggested Citation:"Wallace L. Chadwick." National Academy of Engineering. 2002. Memorial Tributes: Volume 10. Washington, DC: The National Academies Press. doi: 10.17226/10403.
× 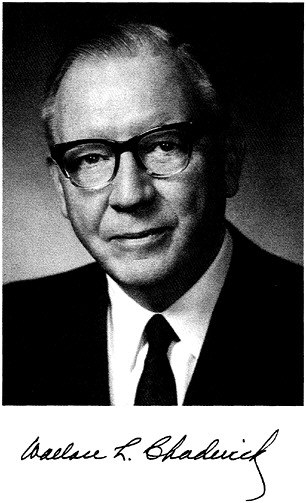 “Chad” was born in Loring, Kansas, on December 4, 1897. However, he grew up in Redlands, California, graduating from high school there in 1916 and attending the University of Redlands from 1916 to 1920, with time out for service in the U. S. Army in 1918. As a distinguished alumnus, he was awarded an honorary doctor of engineering science degree from the university on Founder’s Day, April 20, 1965, when he also delivered the Founder’s Day address. A member of the university’s board of trustees from 1937 to 1979, he served as board chairman for thirteen of those years.

Internationally known for his work in the fields of hydroelectric and thermal power, Chad’s professional life spanned six and a half decades and included work on many of the major civil engineering projects of the twentieth century. His long, productive career began in 1922 when he joined the staff of Southern California Edison. During the next nine years, he served in various engineering and construction capacities, principally as division engineer for construction on the Big Creek hydroelectric development in San Joaquin, California. He also served for three

Chad resigned from Southern California Edison in 1931 to become engineer, and later senior engineer, on the 242-mile Colorado River Aqueduct for the Metropolitan Water District of Southern California. When that project was nearing completion in 1937, he returned to Southern California Edison. There, he served successively as civil engineer, chief civil engineer, manager of the engineering department, and—for eleven years—as vice-president. In addition to general management, his vice-presidential responsibilities included direction of engineering and construction, atomic engineering planning and engineering, and research and development. Among the many projects for which he directed design and construction were the 92-megawatt Big Creek No. 4 hydro project; the 167-foot Vermillion Valley earthfill dam and spillways; and the 150-megawatt Mammoth Pool hydroelectric project, including a 406-foot earthfill dam, ungated spillway, and 3,370-megawatts in seven high-temperature, high-pressure steam electric power plants. His development of the first full application of digital computers for automatic control of large steam electric power plants earned him the Instrument Society of America’s Philip T. Sprague Award in 1963. Chad directed planning, design, and construction of the San Onofre Nuclear Power Plant as well as nuclear research and development. He also performed research and development for seawater conversion for the Mandalay project and for improved air pollution controls. And, in 1962, the year of his retirement, he produced a report for Southern California Edison on the organization and practices of power systems in fourteen Western European countries.

However, Chad’s mandatory retirement at age sixty-five was merely a springboard for twenty-five additional years as an engineering consultant, during which he served thirty-three clients on more than 100 projects in eight countries. The Bechtel group of companies, a primary client during these years, sought Chad’s counsel on engineering and construction, contract administration, and project management issues in diverse fields, including rapid transit, water supply, and hydro and nuclear power.

During the 1960s, Chad lent his expertise to the joint venture of Parsons Brinckerhoff-Tutor-Bechtel in the analysis of engineering and construction problems associated with the underground subway station and tube of the new Bay Area Rapid Transit System. Bechtel also used his services on the Boston Massachusetts Redline Subway Extension for the Massachusetts Area Transportation Authority and for the Washington, D. C. , Metro for the Washington Metropolitan Area Transit Authority. Bechtel water supply projects on which he consulted include the Skookumchuck earthfill dam and spillway for Pacific Power & Light and the Washington Water Power Company; the Pardee Dam for the East Bay Municipal Water District in the San Francisco Bay Area; and the Setif, Algeria, irrigation project. Chad also advised Bechtel on design and construction of the 5,300 MW Churchill Falls hydro development in Labrador and the 700 MW Manapouri hydro project in New Zealand. His nuclear power consultations for the company included the Midland, Michigan, Nuclear Plant; the Hanford, Washington, Fast Flux Test Facility; Washington Nuclear Power Projects 1, 2, and 4; and the South Texas Nuclear Plant. Chad also traveled to Saudi Arabia twenty-six times in ten years to fulfill his commitments to Bechtel as chairman of the Project Review Board for the massive Jubail Industrial Complex.

Chad’s long list of clients included Southern California Edison Company, Consolidated Edison Company of New York, the State of California Department of Water Resources, Dames & Moore, and the U. S. Bureau of Reclamation. He was chairman of the board of engineering consultants for design and construction of the 10,282-megawatt James Bay hydro development in Northern Quebec, and—following his consultancy with Bechtel on the Churchill Falls project—became a long-time consultant to the Churchill Falls (Labrador) Corporation. He also prepared a special report on the adequacy of the engineering and foundation design of the Reza Shah Kabir Dam in Iran for Harza Engineering Company.

Chad was an active participant in several engineering societies and received wide recognition and many honors—among them, election to the National Academy of Engineering (NAE)

in 1965. A registered civil engineer and a registered mechanical engineer in California, and a member of Tau Beta Pi and Chi Epsilon, he received the 75th Anniversary Award from the American Society of Mechanical Engineers in 1955. He was a fellow and long-time member of the American Society of Civil Engineers, which he served as president in 1964 to 1965, and which awarded him the Rickey Medal in 1971.

In 1969 Chad received the Golden Beaver Award from the Western United States Contractors for “Outstanding Achievement in Heavy Engineering Construction,” and in 1978 he was selected by Engineering News-Record as “Construction’s Man of the Year. ” Named an honorary member of the American Society of Mechanical Engineers in 1979, Chad was also a fellow of the Institute of Electrical and Electronics Engineers and a member of the American Concrete Institute and the United States Committee of the International Commission on Large Dams.

Indicative of Chad’s stature in the engineering community, he was appointed in June 1976 to head a six-member panel of experts recommended by the NAE, the National Academy of Sciences, and other organizations to determine the cause of the disastrous collapse of the 307-foot-high Teton Dam. The dam had collapsed while its reservoir was being filled for the first time, killing eleven persons and causing $1 billion in property damage. The resulting 400-page report faulted the U. S. Bureau of Reclamation for selecting an “unfortunate” design and failing to heed normal safety precautions.

Government agencies and companies worldwide continued for many years to value Chad’s vast knowledge and experience. But organizations closer to home also benefited from his energy and wisdom: Chad served for eight years as a member of the San Marino City Council; twenty-three years on the Water and Power Committee of the Los Angeles Chamber of Commerce; and twenty years on the Advisory Committee on Saline Water Conversion for the Water Resources Center at the University of California.

Chad’s wife of seventy-one years and former University of Redlands classmate, Beulah Dye Chadwick, died in 1992. After his death in 1996, the Huntington Library in Pasadena, Califor

nia, requested—and received—from Chad’s family his papers for inclusion in a new collection on the history of civil engineering. The collection, established by Trent Dames of Dames & Moore as the fund for the Heritage of Civil Engineering, ensures a permanent record of the integrity and lifelong achievements of Wallace Lacy Chadwick.

Next: Julian D. Cole »
Memorial Tributes: Volume 10 Get This Book
×