Get This Book
Visit NAP.edu/10766 to get more information about this book, to buy it in print, or to download it as a free PDF.
« Previous: Milo C. Bell
Page 24 Share Cite
Suggested Citation:"J. Lewis Blackburn." National Academy of Engineering. 2002. Memorial Tributes: Volume 10. Washington, DC: The National Academies Press. doi: 10.17226/10403.
× 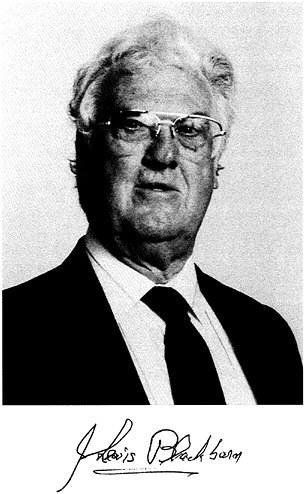 BY WALTER A. ELMORE

J. LEWIS BLACKBURN, born in Kansas City on October 2, 1913, rose to dominance in a field of engineering that has nurtured many prominent leaders in the electric utility industry. He died on February 23, 1997. Lew treasured his roots in Missouri and never hesitated to cheerfully flaunt his “Show-Me” attitude. He received his electrical engineering degree at the University of Illinois, where he graduated with a B. S. degree. He started his professional career with the Westinghouse Electric Corporation in 1936 through the encouragement of one of the giants of the industry, W. A. Lewis, who had been understandably impressed by this brilliant young engineer at Illinois. His progress at the beginning was rather slow because of a speech impediment. Nothing could have driven him more unceasingly than this shortcoming. He was possessed with the desire to excel in this area where he seemed so unlikely to dominate. He succeeded beyond all expectations. Though still possessing a slight impediment, he went on to become one of the most respected and warmly received engineering lecturers of his time and taught tens of thousands of relaying specialists in their craft.

In 1952 Lew was made engineering supervisor in the Relay and Instrument Division of Westinghouse at Newark, New Jersey, and in 1955 he became engineering section manager of all high-speed relaying. His responsibilities included the develop

ment of devices for transmission line protection capable of identifying the location of a short circuit and opening a giant circuit breaker in 1/60th of a second. The success of this group of devices has not been surpassed by any modern-day apparatus, even though we have all of the power of the microprocessor and its associated technology at our disposal.

From 1969 through 1978, Lew served as consulting engineer for the Relay-Instrument Division. In 1976 Lew and his staff developed an unrivaled textbook entitled Applied Protective Relaying, the dedication of which speaks volumes about his contribution to it. It states, “This book is dedicated to J. Lewis Blackburn, without whose enthusiasm and persistence, it could not have been written. Though the names of other authors appear on some chapters, none exist without his imprint. His long-term contribution to protective relaying goes far beyond this book, as any of his thousands of students, colleagues, and friends all over the world will attest. ”

His interest in the training and development of recent graduates went far beyond his promotion of and extensive involvement in the Westinghouse Protective Relaying Schools. He was also, at times during his career, deeply involved in university-promoted night schools. In addition to the obvious courses on relaying, he also regularly taught a course on symmetrical components and systems analysis at Brooklyn Polytech, Stevens University, and Newark College of Engineering.

In 1978 he received the Fellow Award from the Institute of Electrical and Electronics Engineers (IEEE). Also, in that year, he received the Distinguished Service Award from the Power System Relaying Committee of the Power Engineering Society of the IEEE. The Outstanding Teaching Award was extended to Lew by the Education Activities Board of IEEE in 1980. Also in 1980 he received the high honor of the Westinghouse Order of Merit and the Lewis Blackburn Room was dedicated in his name at the Coral Springs plant. He received the Centennial Medal from the IEEE in 1984 for his long-term contributions to the industry.

as secretary of that body, then two years as vice-chairman, and, beginning in 1970, two years as chairman. With this exceptional record of service, he left a prominent mark on this committee.

During his very productive years at Westinghouse, Lew organized a series of lectures with members of his staff and presented them throughout the world. His students included hundreds of people from Brazil, the Far East, Venezuela, Canada, and Europe. His and his associates’ notes for these schools formed the nucleus of what ultimately became the book Applied Protective Relaying and its successor, Protective Relaying Theory and Applications, which are accepted internationally as premier texts on the subject that he held so dear to his heart.

Another area into which Lew’s enthusiasm took him was stamp collecting. To say that Lew was a stamp collector would be much like suggesting that Mozart wrote songs. Lew was a philatelist of the highest order. He was secretary of the Chinese Stamp Society and simultaneously president of the Polar Philatelists. His stamp collection was breathtaking!

Following his retirement, he wrote two more texts that have become classroom classics. The first in 1987 was simply titled Protective Relaying. It was complete with a set of problems that any professor would be proud to present to his students. The second in 1993 was another fundamental text entitled Symmetrical Components for Power Systems Engineering, which covered electrical concepts and problem solutions, not only relating specifically to the application of relays, but this time to the entire power system. He was encouraged to write more books, because of the clarity and simplicity he brought to complex subjects, but time did not permit. Lew left three devoted daughters and his beloved wife, Peggy, who followed him in death shortly after his passing.

Next: J. Keith Brimacombe »
Memorial Tributes: Volume 10 Get This Book
×