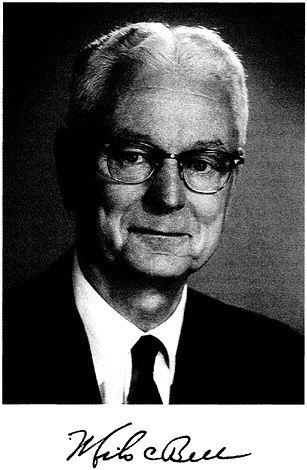 WRITTEN BY ROY I. JACKSON SUBMITTED BY THE NAE HOME SECRETARY

“If it wasn’t for salmon there wouldn’t be a clean river left in this State!”

“Water that’s good for salmon is good for people. ”

IN A PROFESSIONAL CAREER that spanned almost sixty years, Milo Bell, mechanical engineer, evolved and forged an outstanding career as a fisheries engineer. He worked throughout his long life to save the wild salmon runs of the Pacific Coast of North America from depletion and extinction caused by obstruction and other uses and abuses of the freshwater access routes and spawning streams and lakes vital to salmon’s continued existence.

Milo Bell was born in Iowa on June 4, 1905. He came to the Pacific Northwest as a young man and received his degree in mechanical engineering from the University of Washington in 1930, as the Great Depression was beginning to spread its chill across the economy of the United States. Jobs were scarce, but Milo found employment helping to solve the problems of the salmon fisheries, which in the state of Washington, depended heavily on the wild salmon produced in the tributaries and lakes of the Columbia River and its 250,000 square-mile watershed. To understand his unique achievements in conserving wild salmon stocks, it will help to know something of their life history.

The five major salmon species of the genus Oncorhynchus, numbering hundreds of millions in total abundance, range both sides

of the North Pacific Ocean and its tributaries from approximately the latitude of San Francisco and central Japan north to the Artic Ocean, including Alaska and north-flowing streams in Siberia. All Pacific salmon are anadromous, that is, all spawn in fresh water. Without exception, all are predestined to die after spawning once, giving their lives for progeny they will never see. All their offspring are programmed to migrate downstream to the sea sooner or later, in search of its vastly more abundant food supplies. There they remain, growing rapidly, until approaching sexual maturity impels their return to their home streams to spawn and die.

The salmon’s requirement for access to freshwater streams and lakes for spawning conflicts with many other uses and users of the watersheds. Dams, diversions, waste disposal, and other pollution, natural hazards, and many other uses of the water-sheds, all damage or destroy salmon runs. Since salmon cease feeding when leaving the sea for their parent streams and then migrate hundreds and even thousands of miles, delays or added stress can be deadly.

Major dams on the Columbia posed new obstacles to upstream migrant salmon enroute to their home streams. Their offspring, when headed downstream to the sea, met other hazards, including relatively still-water reservoirs, irrigation diversions, and turbines.

During the long era of dam building on the Columbia and its tributaries, Milo Bell, as chief engineer of the State of Washington Department of Fisheries, took the lead in conceiving and initiating the design and construction of many specialized structures to pass adult salmon safely upstream and their progeny downstream. He led the design and construction of rotary screens to prevent downstream-migrating young salmon from entering irrigation off-takes, which led only to death in farmers’ fields. He designed and constructed hatcheries to produce young salmon in man-made environments where natural production was no longer feasible or adequate.

spawning sockeye salmon, along with all the other anadromous species. Fraser River sockeye, inbound to spawn, were caught by fishermen of both Canada and the United States in their respective territorial waters. An international treaty creating the International Pacific Salmon Fisheries Commission (IPSFC) came into effect between Canada and the United States in 1937. Field investigations determined that a major obstacle to upstream migration of mature sockeye enroute to their parent tributaries to spawn existed at Hell’s Gate, 130 miles above the mouth of the Fraser. Here, railway construction in 1913, notching into the wall of the 600-foot-deep granite canyon, had deposited masses of rock into the already constricted river, the eroded site of an ancient waterfall. Prompt action had been taken to remove the debris, but the passing of decades brought down more rock. This created a head of about nine feet over a short distance at certain stages, resulting in high velocities and excessively turbulent flow, which impeded or prevented the upstream passage of sockeye salmon. Because salmon do not feed enroute upstream and rely on their supply of stored energy for migration, delays can cause failure to complete their journeys or even death before spawning.

In about 1940 Milo Bell, first as a consultant and then as chief engineer, came to the IPFSC to lead the investigation, design, and construction of fishways at Hell’s Gate to enable the free passage of sockeye at all critical stages of flow. Because of the restricted width of the river between bedrock outcrops, the river level could fluctuate as much as fifteen feet in a day. Dynamic model studies Bell organized at the Hydraulic Laboratories of the University of Washington led to the design of unique vertical-slot baffle “fishways” to be built into both steep and rocky banks of the turbulent river. Necessarily constructed during low water in harsh winter conditions during the years of the Second World War, the difficult construction was completed on schedule and within budget. Milo Bell returned to Seattle in 1951, having established himself as an outstanding innovator and leader in the specialized field of engineering solutions to the natural and man-made problems of migrating salmon.

In a career that continued for almost four more decades, he

dealt with almost every physical, engineering related problem of freshwater fisheries throughout the United States and Canada. In the same decades, Milo Bell produced designs and conducted model studies in search of solutions for fish-passage or protective facilities for migrant and resident fishes of every type and size. From 1940 to 1953 he was a special lecturer at the well-known College of Fisheries of the University of Washington in Seattle. His academic career at that college continued as he rose to the rank of professor in 1963 and to emeritus professor in 1975. He became a member of the National Academy of Engineering in 1968. He won the Eugene Baker Award of the Association of Conservation Engineers in 1969 and the Award of Excellence, Bioengineering Section, of the American Fisheries Society in 1984. In 1973 in recognition of his contributions to fisheries conservation, he was admitted as a fellow of the American Institute of Fisheries Research Biologists. His many publications included handbooks for problem solving and technical reports of research, design, and operational review.

Milo Bell’s professional career of almost sixty years was single-purposed, working always to protect an important living natural resource from hazards arising from increasing human population and industry and the growing and competitive uses of our river systems. He was an environmentalist long before the concept became generic. His concern was always to hold the line, to minimize losses, to save brood stocks and gene pools. He knew that each separate stream population of each species developed its own characteristics and timing in response to the individual environmental characteristics and location of each parent stream.

To me, because I know it best, Milo Bell’s outstanding achievement will always be the magnificent Fishway System at Hell’s Gate, which has now functioned superbly for more than half a century. His innovative and unique design has become a prototype for solutions wherever comparable needs and problems exist. Self-adjusting and self-operating, requiring almost no maintenance, the design embodies no moving parts other than downflowing water and upstream-driven salmon. Resisting the constant pounding force and energy of a major river in flood, they function for any salmon that needs assistance and are capable of

safely passing a million salmon a day. Fishways so skillfully designed and placed that they offer all migrant salmon safe passage at the right time and place. A fitting monument to a great fisheries engineer.

Next: J. Lewis Blackburn »
Memorial Tributes: Volume 10 Get This Book
×