Get This Book
Visit NAP.edu/10766 to get more information about this book, to buy it in print, or to download it as a free PDF.
« Previous: Howard W. Emmons
Page 82 Share Cite
Suggested Citation:"Eugene G. Fubini." National Academy of Engineering. 2002. Memorial Tributes: Volume 10. Washington, DC: The National Academies Press. doi: 10.17226/10403.
× 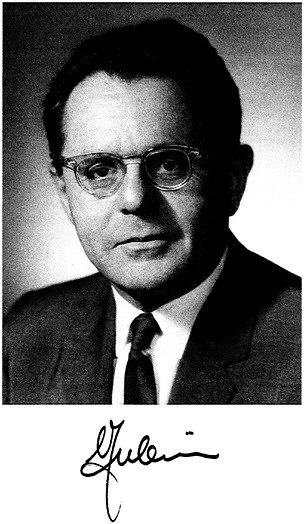 IN MY FIFTY-ONE YEARS OF PROFESSIONAL LIFE, from the vantage point of being an IBM general management executive, a venture capitalist, an executive in a high technology consulting firm, president of a Taiwan semiconductor company, president of an advanced electronics company and chairman of a leading software technology company, I have met some of the world’s greatest scientists, engineers, government and corporate executives, heads of state, educators and working people. Of all those met in my lengthy business life, the most remarkable is Dr. Eugene Fubini.

This brilliant and amazing man, perhaps five feet tall in his shoes, was a bundle of vibrant energy with infinite curiosity, compassion, warmth, and knowledge far beyond his training as a physicist. He had an abiding love for his adopted country and made significant contributions to hundreds of projects from his early days as a young engineer at Columbia Broadcasting System. He began to hit his stride as a research associate during World Was II at the famed Harvard Radio Research Laboratory, where he led advances in electronic countermeasures and reconnaissance equipment.

After the war, Dr. Fubini spent sixteen productive years at the Airborne Instruments Laboratory Company, where he continued to innovate in the field of reconnaissance electronics. He

In March 1961 his opportunity for contributions enlarged significantly as he joined the Department of Defense (DOD) as director of research in the Office of Director, Defense Research and Engineering. He had great influence on DOD research and engineering, and his reputation rapidly became international. In two short years he was promoted to assistant secretary of defense for research and engineering and was a key part of a famed team of DOD executives.

In 1965 I became president of IBM’s Federal Systems Division and longed to have access to such an important leader. However, Dr. Fubini tended to DOD business and tried to avoid sales calls by all-too-anxious defense contractors. In 1966 Dr. Fubini joined IBM as a vice-president responsible for research and other advanced development operations. Because the Federal Systems Division’s activities were close to Dr. Fubini’s heart, I had the great fortune of becoming a close and admiring friend. Because of his reputation for brilliance, Dr. Fubini was in great demand by the aerospace community and, occasionally, agreed to review a project. I recall vividly one instance where a major corporation had invested two years of effort on an advanced system and they anxiously wanted Fubini’s overview. Dr. Fubini agreed to review the project and invited me to observe. After the company’s well-prepared presentation, Dr. Fubini not only showed them why their concept was fatally flawed, but he did it in such a way that they accepted his critique and the project was terminated, probably saving the company millions of dollars and, possibly the federal government hundreds of millions of dollars!

Many a night have I spent at the Fubini’s home or he at mine. The invigorating discussions still influence me. I watched as his adoring wife, Betty, brought tea and cookies to our late-night discussions. I have watched him tell each of his six loving children good night and seen the warmth in his eyes for all of his family.

Sadly for IBM, Dr. Fubini left after two years and returned to his first love, the business of the DOD. He became a consultant

and was in high demand. From my direct knowledge, Dr. Fubini contributed again and again in guiding not only companies but also the DOD in his role as chairman of the Defense Science Board.

Gene Fubini was remarkable as he positively influenced all the people who were in contact with him and steered technologies to high purpose. His brilliance wisely guided the Defense Department as well as many aerospace companies. The world lost a great professional when Gene Fubini passed away—yet his legacy continues.

Next: Donald F. Galloway »
Memorial Tributes: Volume 10 Get This Book
×