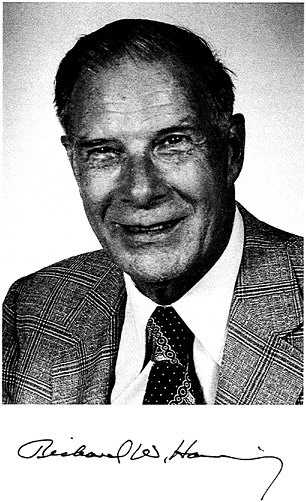 Dick was born February 11, 1915, in Chicago, Illinois. His father was Dutch and ran away from home at age sixteen to fight in the Boer War. His mother’s lineage goes back to the May flower. Dick went to one of the two public boys’ high schools in Chicago. The family moved only once while he was growing up— to within two blocks of their first apartment.

He met Wanda Little when she was sixteen and he twenty-one, introduced by a friend who knew they both liked to dance. Dick at this time lived at home, commuted to the University of Chicago, and studied on the “El. ” Wanda was then attending the only girls’ high school in Chicago. Wanda received her M. S. de

gree (English, teaching math minor) from Illinois in June 1942. They were married in September 1942.

After marriage, both taught algebra and trigonometry at the University of Illinois to the enrollees in the Army Specialized Training Program, until February 1944. They went to the University of Louisville for a year, where Dick taught budding naval officers. Following this stint of teaching, he was invited to join the Manhattan Project at Los Alamos in April 1945. There he was assigned the task of keeping the IBM relay computers running so that the physicists could go back to working out the theoretical aspects of the atom bomb. Although Dick knew little about such machines, he learned quickly about their potential and their failings. In later interviews about these early days, he noted that even then, in spite of the primitive nature of those computers with their high relative error rates and their slow speed, they were the forerunners of tools that would lead to fundamental changes in the way science would be done in the future.

Dick left Los Alamos in 1946 to join the mathematics group at Bell Telephone Labs in Murray Hill, New Jersey. He was one of a group of talented young scientists who in their years at Bell Labs contributed greatly to extremely significant advances in computers, information theory, and of course solid-state electronics and the invention of the transistor. It was here that Dick devised an error detecting and correcting scheme now known as Hamming Codes for computers. These codes depend on the fact that in a binary code it is only necessary to know the position of a binary digit that is in error in order to correct it. To specify a particular digit in a string, say, fifty digits long requires that only six of these digits be assigned as “error correcting” positions, and the remaining forty-four become information code. The designer may go to higher levels of assurance of data integrity, the next steps being single error correction but double error identification and for more highly error prone systems, double error identification and correction. The initial Bell Sys tem Technical Journal article of April 1950 was used by one of us (Loomis) in a course at the University of California, Davis. “Introduction to Electrical Engineering,” a course for sophomores,

was designed to be motivational, and the paper was ideal because it presented a truly important result; it was self-contained, and unlike many such papers was clearly written. While still at Bell Labs, Hamming continued his work on numerical analysis, numerical integration, and numerical filtering. His major works during this period include Introduction to Applied Numerical Analy sis (1971) and Digital Filters (1977).

Dick retired from Bell Labs in July 1976 and joined the faculty of the U. S. Naval Postgraduate School at Monterey, California, that same year. He had concluded that, “It was time to let the young fellows take over” and that he could best serve by teaching, writing, and “teaching future admirals how to think. ” Dick was concerned about retiring “too late. ” He did not want to overstay his welcome; he felt that “important research was done by the young” and that he should step out of the way. He taught a number of courses and wrote numerous books and articles. The essence of this part of his life was in a unique course, “Future Engineering Practice” (called affectionately “Hamming on Hamming”), and the book he wrote for it, The Art of Doing Science and Engineering. This course, which he taught for more than six years, was a popular elective and heavily attended. He often said, “If you don’t work on important problems, it is not likely that you will do important work. ” He was always thinking about important problems and continually challenged colleagues and students to do the same.

One final note about this part of his life. Dick loved chocolate almost as much as he loved teaching and important ideas. A favorite quotation was written in calligraphy on his office door: “Good teachers deserve apples; great teachers deserve chocolate. ”

Dick Hamming was elected to the National Academy of Engineering in 1980. A partial list of other honors and prizes includes the $130,000 Eduard Rheim Award for Achievement in Technology, the Richard W. Hamming Medal created in his honor by the Institute of Electrical and Electronics Engineers (IEEE) and accompanied by a $10,000 prize, the Harold Pender Award from the Moore School of Electrical Engineering, the Turing Prize of the Association of Computing Machinery, the

Emmanuel R. Piore Award from IEEE, and election as a fellow of the IEEE. Finally, the secretary of the U. S. Navy posthumously awarded him the Navy Distinguished Public Service Award. After his death and with generous support from his widow, Mrs. Wanda Hamming, and colleagues and friends, two awards at the U. S. Naval Postgraduate School were established in his memory. The Richard Hamming Award for Interdisciplinary Achievement was first awarded in March 2000, and the Richard Hamming Award for Excellence in Teaching was awarded for the first time in September 2000.

While he was at the height of his career at Bell Labs, the Franklin Institute awarded him the Certificate of Merit for the invention and application of error-correcting codes for computer systems. The citation that went with this award is an excellent summary of the impact of Dick’s work with error-correcting codes and we choose to conclude this tribute with that citation.

Hamming’s achievement enormously improved the practical application of early computers by substantially increasing their reliability. But it is even more remarkable that many modern computers still use Hamming’s techniques to correct errors in main memory. Although modern computers have very reliable fundamental components, the huge number of such components, e. g. the bits in a computer’s main memory, means that the probability of an erroneous result would be significant without Hamming Codes and similar codes that Hamming inspired. It is not an exaggeration to say that modern graphical computing, which requires large main memories, would be impractical without Hamming’s invention. Furthermore, computers in critical control applications cannot have any significant probability of an erroneous result. These applications would not exist but for the use of the work of Richard W. Hamming.

Next: N. Bruce Hannay »
Memorial Tributes: Volume 10 Get This Book
×