Get This Book
Visit NAP.edu/10766 to get more information about this book, to buy it in print, or to download it as a free PDF.
« Previous: Elmer P. Wheaton
Page 248 Share Cite
Suggested Citation:"Eugene C. Whitney." National Academy of Engineering. 2002. Memorial Tributes: Volume 10. Washington, DC: The National Academies Press. doi: 10.17226/10403.
× 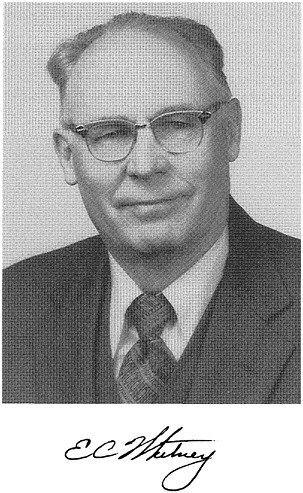 BY EDWIN L. HARDER AND LEE A. KILGORE

THE CENTENNIAL CELEBRATION of the Institute of Electrical and Electronics Engineers in 1984 revealed much about the pioneers of electrical engineering. It revealed that when Benjamin Lamme designed the electrical machines for Niagara Falls, they were four times larger than any electrical machines that had ever been built. When Edwin Harder mentioned this to Gene Whitney, he said, “Yes, that’s right—until I built the Grand Coulee machines. They were six times larger than the largest previous machines. ” The parts had to be shipped out to Grand Coulee and assembled in the power plant. Then they were simply started, and they have worked perfectly since.

Because electrical machines six times the size of those at Grand Coulee are not likely to be needed in the world, Whitney’s record is likely to stand, and by this measure he remains the greatest hydro machine designer in the world!

In a chance meeting years later with Whitney’s boss at the time of Grand Coulee, he was still amazed that Gene had been able to design those tremendous machines and that they had worked perfectly from the start.

Whitney designed hydro machines for dams and pumped storage projects all over the United States. He was the consultant for the huge Itapu project in Brazil. He designed the electrical ma

chines for Muddy Run, a pumped storage project on the lower Susquehanna River. He was present when the machines were first to be started. The operator was reluctant to take the first step. Gene said, “Call your boss. ” The boss said, “If Gene says to start the machines, start them. ” So they did, and water rose from the lower Susquehanna River to the upper reservoir, 400 feet above, on the Piedmont Plateau, through which the Susquehanna River had cut its valley. Thereafter the upper reservoir was refilled every weekend and drawn down day by day throughout the week (partially refilled at night), to provide peaking power for the Philadelphia Electric system.

Whitney’s career was with the Westinghouse Electric Company. He arrived just in time to help clean up after the 1936 flood. Starting as a design engineer, he became manager of engineering for large motors and water-wheel generators. He developed many concepts and patents for winding, steel damper bars, brushless exciters, and efficiency and cost reductions.

Gene’s romance with Jina (Nina-Jean) Knudson started in high school and continued in college at Flint Junior College and the University of Michigan. They were married in Pittsburgh, after Gene had joined Westinghouse, on August 1, 1937.

They had three children, Margaret (Lessman), James, and Alan. Gene and Jina both enjoyed outdoor activities, including camping, canoeing, swimming, and tennis. They were members of the Sylvan Canoe Club on the Allegheny River in Pittsburgh and shared in club activities with their many friends. Gene was a pillar of his church and took an active part in it.

Gene was the recipient of many honors. He received the Westinghouse Order of Merit in 1964, the Institute of Electrical and Electronics Engineers (IEEE) Nikola Tesla Award in 1985, and was an IEEE fellow. He was elected to the National Academy of Engineering in 1986.

After retirement Gene did consulting work for hydro projects all over the world. He was active in the Boy Scouts, the Kiwanis Club, and in many family activities. He was loved and admired by all his friends.

Next: Frank Whittle »
Memorial Tributes: Volume 10 Get This Book
×