Get This Book
Visit NAP.edu/10766 to get more information about this book, to buy it in print, or to download it as a free PDF.
« Previous: Albert G. Mumma
Page 178 Share Cite
Suggested Citation:"Ryoichi Nakagawa." National Academy of Engineering. 2002. Memorial Tributes: Volume 10. Washington, DC: The National Academies Press. doi: 10.17226/10403.
× 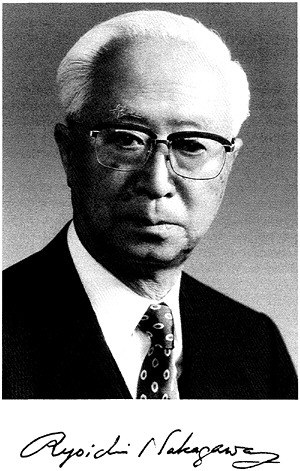 DR. RYOICHI NAKAGAWA, retired executive managing director, Nissan Motor Company, Ltd. , died in Tokyo, Japan, on July 30, 1998. Dr. Nakagawa was born in Tokyo on April 27, 1913, and received his B. Sc. degree in mechanical engineering and his Ph. D. in engineering from the prestigious University of Tokyo. Not only was Dr. Nakagawa one of the nicest and kindliest people I have ever met, but he was also one of the most aristocratic. My wife and I fondly remember Dr. Nakagawa coming to our home in Birmingham, Michigan, and spending a lot of time with our children teaching them origami and Japanese children’s games. This no doubt had an influence on our daughter, Bronwyn, who majored in Japanese at the University of Michigan.

Although I originally met Dr. Nakagawa through our mutual interests in automobile design, we both came from the aerospace and defense industries. It was through these earlier defense-related experiences that we calmly discussed the implications of the United States dropping the two atom bombs on Japan. Our discussions were both interesting and objective and, most important, each of us understood the other’s position.

Dr. Nakagawa devoted his sixty-year career to engineering in a wide array of disciplines. He started his career as an aircraft engine designer in 1936 at Nakajima Aircraft Company and stayed at this company until the end of World War II.

Dr. Nakagawa had immense credibility in the engineering community, as demonstrated by an enormous amount of recognition. He was a foreign associate of the U. S. National Academy of Engineering and a member of the Engineering Academy of Japan. He was president of the Society of Automotive Engineers of Japan and a recipient of the Japanese Government’s Third Order of the Sacred Treasure and Blue Ribbon Medal, the Merit Medal for Army Technology of the Japanese Department of the Army, the Progress Award of the Imperial Society of Inventors, and the Transportation Cultural Award from the Japanese Department of Transportation.

Throughout his career, Dr. Nakagawa was a prolific author, inventor, and keynote speaker. He received his first patent in

1942 on fuel injection systems for aircraft engines and successfully carried this technology into the automobile.

Dr. Nakagawa was a renaissance person in advancing harmony between industries and nations. Perhaps the following recommendations by one of his references for membership in the National Academy of Engineering exemplifies this:

Dr. Nakagawa has been a pioneer in stimulating new ways of working together between industries and governments. Particularly noteworthy is his leadership in establishing and helping to manage the cooperative activity that was carried out by the members of the Japanese automotive industry, members of the U. S. petroleum industry, and Ford Motor Company through the Inter-Industry Emission Control program. This program was particularly important in bringing together and rationalizing diverse views that existed among those industries involved in the early efforts to reduce automotive emissions. Dr. Nakagawa was an effective spokesman and advocate for the Japanese industry. He was particularly effective in developing a relationship with U. S. industry members that led to greatly improving understanding and trust on the part of all participants in the program. The acknowledged success of this program was due in large measure to the efforts and leadership of Dr. Nakagawa.

Dr. Nakagawa’s involvement in automotive engineering, his directorship of the electronic activity of Nissan Motor Company, and his continuing involvement in the university system in Japan is a clear measure to his broad interests and the concern that he has for the impact of engineering on related areas.

As one of Dr. Nakagawa’s closest friends in the United States, I had the true privilege to support his nomination for membership in the National Academy of Engineering. I know his knowledge, presence, and ever-smiling and welcoming face will be missed by all whom had the good fortune to meet him.

Next: Kenneth D. Nicholas »
Memorial Tributes: Volume 10 Get This Book
×