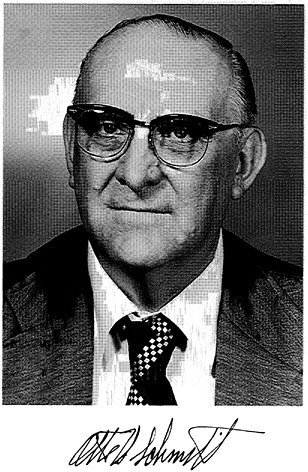 BY HERMAN P. SCHWAN AND DAVID B. GESELOWITZ

OTTO HERBERT SCHMITT died on January 7, 1998, in Minne-apolis three months shy of his eighty-fifth birthday. Otto will be remembered for his scientific contributions to biophysics and biomedical engineering, for the crucial role he played in the establishment of these fields, and as a great inventor.

Otto was born in St. Louis, Missouri, on April 6, 1913. He obtained his B. A. degree at Washington University (St. Louis) in 1934 and his Ph. D. degree in physics and zoology in 1937. He was a National Research Council Fellow and Sir Halley Stewart Fellow at the University College in London during 1938 and 1939. During the war he served as a research engineer at Columbia (1942 to 1943) and supervising engineer, Special Devices Division, Airborne Instruments Laboratory (1943 to 1947). He joined the University of Minnesota, Minneapolis, as an instructor of physics and zoology in 1939. He retired in 1983 as professor of biophysics, biomedical engineering, and electrical engineering, although he continued to teach and work in his laboratory.

Otto was a leader of the emerging fields of biomedical engineering and biophysics. His interests covered many fields. His broad orientation was largely due to his inquisitive mind and his education, which was unusually diversified. Another important influence was his admired older brother, Frank Schmitt, an out

standing neuroscientist whose work was also broadly oriented. But most of all, he depended on his wife, Viola, whom he married in 1937 and who preceded him in death after a marriage of fifty-eight years. Viola was always at his side. She kept order in his incredible productivity. He was deeply in sorrow after her death.

One of us (Herman P. Schwan) met Otto for the first time at a meeting of the American Physiological Society in Columbus in 1950. Herman was actively involved in a multisociety group responsible for planning the first interdisciplinary annual conferences concerned with engineering in medicine and biology. The annual conferences had started three years earlier and were primarily oriented toward x-ray technology and medical physics concerned with ionizing radiation. The attendance was poor and without perceptible growth. Reorientation toward medical electronics, electrophysiology, and biological impedance work was indicated. Otto Schmitt agreed to organize the eleventh annual conference. The meeting in Minneapolis was on computers in medicine and biology. It was a great success and nearly 400 persons attended. From then on things moved rapidly, ensuring a good future for the interdisciplinary field.

About 1955 Otto and Herman attended a meeting at the Mayo Clinic concerned with potential hazards caused by microwave exposure. They discussed the need for a biophysical society. A few years later the first meeting of the Biophysical Society took place, organized by the “committee of four,” including Kacy Cole, E. Pollard, O. Schmitt, and S. Talbot. A few years later the Biomedical Engineering Society was formed, and Otto served as the initial caretaker president.

Otto told David B. Geselowitz that as a youngster he built a Tesla coil but found that the available current from the local transformer was inadequate. Complaints to the power company were of no avail. So he inductively shorted the circuit at the fuse box, and the transformer burst into flames and was immediately replaced with one of higher capacity. At one point, his mother walked in while he was experimenting with the Tesla coil. Sparks were shooting from her son’s mouth and ears, and she fainted. In high school Otto rewired a motor used by a teacher to dem

onstrate the effect of load on a dc motor. When the teacher grabbed the motor to apply a load, the motor increased its torque throwing the teacher off the podium.

From 1931 (when he was eighteen years old) to 1939, Otto published some seventeen articles in the Review of Scientific In struments and the Journal of Scientific Instruments describing a series of inventions, many of which are of exceptional importance. In 1934 he patented the idea of using a pentode as the plate resistor for a pentode, thus achieving a much higher gain. Otto told David B. Geselowitz that RCA infringed on the patent, but when his attorney approached RCA, he was advised to sue. The cost ($20,000) of such an action was prohibitive. Otto was bitter and did not patent many subsequent devices, which included the cathode follower, the differential amplifier, the chopper-stabilized amplifier, and the Schmitt trigger. During the Second World War he made important contributions, which were top secret. One of his inventions was a magnetic anomaly detector to pinpoint the presence of enemy submarines.

Otto was an excellent engineer and biologist. The “Schmitt trigger” is an electronic circuit that produces an output when the input exceeds a predetermined threshold; it still appears in hundreds of applications. It is an excellent example of “bionumetics,” a term that Otto coined for a field that applies biological design principles to engineering. His work in the well-known laboratory of Bernhard Katz in London and his participation in the Cold Spring Harbor Symposia brought Otto in early contact with many leading electrophysiologists. His work with Airborne Instruments Laboratories on Long Island during the 1940s contributed to the development of his outstanding engineering talents.

A few examples will serve to illustrate his wide-ranging interests. Shortly after the war he constructed an automatic instrument that could evaluate nerve preparations and could rapidly determine its cable properties on-line. He used the instrument to study and publish on the topic of dynamic negative admittance components in statically stable membranes. He and John J. Almasi constructed a highly precise impedance-measuring instrument that extended the frequency range down to a few

millihertz and provided very high resolution. It was a forerunner of the precision impedance analyzers to come. He also could not help but become interested in the debates about bioeffects of weak electric and magnetic fields. So he and Robert D. Tucker worked on the perception of magnetic fields. This work was quoted often to demonstrate the extent to which one must be willing to go to exclude spurious confounding effects (in their case, minute and weak vibrations of the magnets).

After the war Otto turned his attention to the relationship between cardiac sources and the surface electrocardiogram. His laboratory was one of four that contributed to this effort to understand the volume conductor problem, and led to the development of lead systems for determining the heart vector. The others were Burger in Utrecht, Frank in Philadelphia, and McFee in Ann Arbor.

One of us (David B. Geselowitz) got to know Otto well when we served together on an advisory board established by Hubert Pipberger in 1962 in connection with his efforts to develop a system for computer interpretation of the electrocardiogram. We also served on the American Heart Association Committee on Electrocardiography, which developed standards for electrocardiographs, addressing such issues as frequency response and electric safety. Otto’s suggestions were always insightful.

It was at this time that David became aware of a game that Otto played. Often when he had an idea to propose, he couched it in obscure language. On many occasions he propounded these ideas to people who nodded politely without having any idea of what Otto was saying. When Otto was challenged to explain what he meant, he would rephrase his idea in a more intelligible form. When an understandable statement emerged, it was almost invariably a solid idea. Otto frequently offered ideas to others to develop.

Otto believed in redundancy. He always carried about a dozen pens, no two of the same model to avoid simultaneous failures. He always seemed to be able to fish out from one of his innumerable pockets a gadget someone needed at the moment. He had several working tie clips, including one with a slide rule, one with an abacus, and one with a gun that could be charged

with gunpowder. On several occasions he brought dead silence to a large gathering by firing the gun.

Otto was widely recognized for his outstanding achievements. He was elected to the National Academy of Engineering in 1979 and to the Minnesota Hall of Fame in 1978. Among his other honors are the Lovelace Award, 1960; the William J. Morlock Memorial Award, 1963; the John Price Wetherill Medal, 1972; the Institute of Electrical and Electronics Engineers EMBS Career Achievement Award, 1987 and 1963; and the Medical Alley Award, 1988.

Otto seemed to us to have an unlimited amount of energy and never grew tired of lively discussions. He also loved to laugh at others and himself and was always ready to tell great stories. Whenever he visited he offered to demonstrate a new gadget, which he had acquired. Otto had a wonderful mind, combining extensive knowledge with insight, originality, and humor. We met him for the last time at the fall meeting of the National Academy of Engineering four or five years ago and we spent a few hours together. He told Herman that his wife, Viola, was not well and it was obvious that he was worried. He was rather lonely after the death of Viola. We understand that his mind never gave up.

Next: Judith A. Schwan »
Memorial Tributes: Volume 10 Get This Book
×