Get This Book
Visit NAP.edu/10766 to get more information about this book, to buy it in print, or to download it as a free PDF.
« Previous: Frederick Stucky Billig
Page 50 Share Cite
Suggested Citation:"Richard Henry Bolt." National Academy of Engineering. 2008. Memorial Tributes: Volume 12. Washington, DC: The National Academies Press. doi: 10.17226/12473.
× 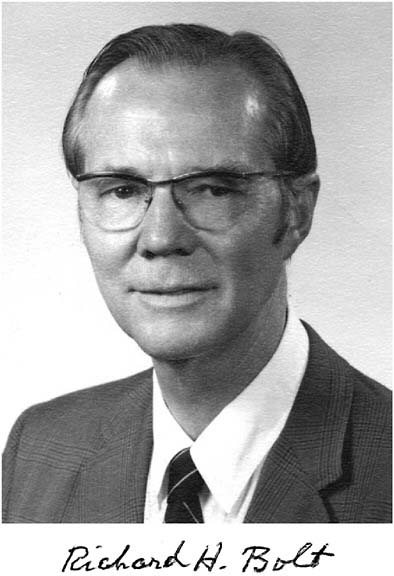 “For contributions to acoustics and leadership in engineering enterprises and public service.”

RICHARD HENRY BOLT, cofounder of Bolt Beranek and Newman (BBN), a leading acoustical design company, and inventor of the ARPANET, died January 13, 2002, in his 90th year. Dick was a many-faceted “diamond,” a gem of a man with a broad range of interests, the ability to communicate with just about anyone, and a passion for helping his colleagues and students.

Dick was born April 22, 1911, in Peking, China, to a medical missionary couple, Richard Arthur Bolt and Beatrice French Bolt. The family returned to the United States in 1916, where Dick completed his schooling at Berkeley High School. In 1928, he entered the University of California at Berkeley, where he received a B.A. in architecture in 1933. His interest in acoustics was sparked by some articles he read in architectural journals.

Dick married Katherine Mary Smith immediately after graduation, and the couple honeymooned in Europe, where Dick was introduced to Professors Erwin Meyer and Hermann Biehle, who were teaching acoustics in Berlin. In just six weeks, Dick learned enough German to enroll in fall classes, Meyer’s at the Heinrich Hertz Institute and Biehle’s at his own institute. Kay provided the finances for this venture. She wrote a play for Berlin shortwave radio and acted in it, earning enough money to continue the honeymoon and finance Dick’s education for 10 months.

After returning to Berkeley in 1934, Dick enrolled in Physics A and D in summer school as qualifications for entry into the graduate physics program. It was the middle of the Great Depression then, and Kay returned to teaching to support Dick’s studies. She taught English and dramatics in a junior high school for the next three years, until 1937, when Dick passed the qualifying examinations for entry into a Ph.D. program. For the next two years, until 1939, the Bolts were supported by financial assistance from academic fellowships.

Working under Professor Vern O. Knudsen at UCLA, Dick earned his Ph.D. (officially from Berkeley) in June 1939. The next academic year he spent at Massachusetts Institute of Technology (MIT) doing research and publishing papers jointly with Philip M. Morse, Albert Clogston, and Herman Feshbach on aspects of sound in variously shaped rooms. For two years, starting in 1940, he directed MIT’s Underwater Sound Laboratory, and in 1943, he was named scientific liaison officer in subsurface warfare to the Office of Scientific Research and Development in London.

At the end of World War II, Dick was appointed director of a newly conceived acoustics laboratory at MIT. At its peak, the laboratory employed more than 80 people, and in just 12 years, 108 graduate theses were completed. Dick taught an acoustics course in the MIT School of Architecture and Planning based largely on physical principles; he also taught a course titled “Advanced Seminar in Architectural Acoustics” to students in the Acoustics Laboratory.

In 1946, MIT received a request from the renowned New York architectural firm Harrison and Abramowitz for a proposal for consultation on the acoustics of the United Nations headquarters buildings in New York. MIT asked Dick to respond, and, following a competition, he received the commission. When the project proved to be too big for a single person, he invited Leo L. Beranek to join him; thus the firm Bolt and Beranek was born in November 1948. A year later, Robert B. Newman, then a member of the faculty of the MIT School of Architecture and Planning, joined as a partner. In 1951, BBN was incorporated, with Dick as chairman of the board, Beranek

as president and chief executive officer, Newman and Samuel Labate as vice presidents, and Jordan Baruch as treasurer.

As BBN grew, it moved first to 16 Eliot Street (in Cambridge) and, in 1956, to 50 Moulton Street, which, when augmented by a two-story building designed largely by Dick, remained BBN’s Cambridge headquarters offices and laboratories for several decades. Dick remained full time at MIT, devoting one day a week to work at BBN.

The MIT Acoustics Laboratory closed in early 1957, when funding from the U.S. Navy Bureau of Ships was terminated. The same year the National Institutes of Health appointed Dick principal consultant in biophysics to work with a new study section in that field. By the summer of 1958, he had organized a successful international conference, held in Boulder, Colorado, to explore future directions for biophysical science. Attended by 117 people, the conference stimulated a step-function of activity in the biological sciences. Ninety of the participants in the conference received collaborative research contracts, and six of them were later awarded Nobel Prizes.

The conference brought Dick national visibility. Beginning in 1960, he spent three years as associate director of the National Science Foundation in Washington, D.C. The next year he worked as a fellow in the Center for Advanced Study in Behavioral Sciences at Stanford University. On his return to MIT, he was a lecturer in the Department of Political Science for several years, during which he helped agency after agency and committee after committee to organize their deliberations and oversee their published proceedings.

In 1973, Dick chaired a committee of six experts investigating the 18-minute gap on a tape made in President Nixon’s office three days after the Watergate break-in. Although the committee was unable to discover who erased the tape, Dick concluded that the erasure was not accidental because it had been started over at least five times during the gap.

The Acoustical Society of America awarded Dick the first R. Bruce Lindsay Award, which is granted to a member of the society 35 years of age or younger. In all, he published more than 50 papers on acoustics and coauthored, with Theodore

F. Hueter, Sonics: Techniques for the Use of Sound and Ultrasound in Engineering and Science (John Wiley & Sons, 1955). From 1944 to 1947, while serving on the Executive Council of the Acoustical Society of America, he undertook to rewrite the society’s constitution. The following year he became the first person to serve as president-elect of the society under one of the newly written bylaws; in 1949, he served a term as the society’s president. On the 50th anniversary of its founding in 1979, the Acoustical Society honored him with its Gold Medal Award. The citation reads: “For outstanding contributions to acoustics through research, teaching, and professional leadership, and for distinguished administrative and advisory service to science, engineering, and government.” He was also an active member or fellow of several other prestigious professional societies, including the American Physical Society, National Academy of Engineering, American Academy of Arts and Sciences, IEEE, and Institute of Noise Control Engineering. When the International Congress on Acoustics was founded in 1953, Dick was chosen to be its first president.

Dick was chairman of the BBN Board of Directors from 1953 to 1976 and continued to be a member of the board until 1981. He maintained an office at BBN until well into the 1990s and acted as a consultant on various projects.

Bill Cavanaugh, an MIT architectural student who later became a division leader at BBN, says, “I resumed my training in acoustics amidst the remarkable group of individuals assembled at BBN to work on acoustical problems of all types. I will never forget the enormous influence Dick Bolt had on me personally during my professional career. His charisma and enthusiasm were infectious. At BBN, he was involved in countless architectural acoustics projects.”

Dick was an avid pianist who loved to play classical music and write songs. Jogging was another favorite pastime. Always upbeat, he enjoyed parties and telling jokes. In his younger days he was a fine water colorist and throughout his life he designed logos.

Dick’s wife, Katherine, died in 1992 after an extended illness. He is survived by one son, Dick Bolt; two daughters, Bea Scribner and Deborah Bolt-Zieses; seven grandchildren; and eight great-grandchildren.

Next: Leon E. Borgman »
Memorial Tributes: Volume 12 Get This Book
×