Get This Book
Visit NAP.edu/10766 to get more information about this book, to buy it in print, or to download it as a free PDF.
« Previous: Charles Noble
Page 228 Share Cite
Suggested Citation:"Frederic C.E. Oder." National Academy of Engineering. 2008. Memorial Tributes: Volume 12. Washington, DC: The National Academies Press. doi: 10.17226/12473.
× 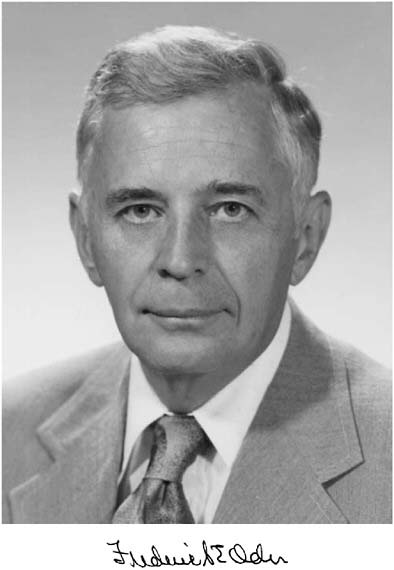 “For leadership in conceiving and developing civil and military satellites.”

FREDERIC C.E. “FRITZ” ODER, colonel, United States Air Force (retired), and former vice president of Lockheed, died May 11, 2006, in Gloucester, Massachusetts, at the age of 86. He was elected to the National Academy of Engineering in 1980.

In the earliest days of pioneering work on satellite reconnaissance, Fritz Oder was instrumental in transforming what was a theoretical concept of having an “eye in space” into reality. At the time, the United States and Soviet Union were vying politically and militarily, and very little reliable information was available about the USSR’s missile and bomber capabilities. Images collected by early satellites gave U.S. presidents photographic evidence of Soviet activities and enabled them to make decisions that had far-reaching implications for America and its allies. In 2000, for this and other contributions to national security—many of which remain classified—Fritz was named a pioneer in national reconnaissance and was inducted into the Air Force Space and Missile Pioneers Hall of Fame.

Fritz was born October 23, 1919, in Los Angeles, California. In an interview late in his life, he said, “I became interested in space at a very young age, long before there was a national space program. I studied and developed an expertise in geophysics and meteorology, which allowed me to get early exposure to developing payloads and putting them on the rudimentary sounding rockets of the post-World War II era.”

He attended the California Institute of Technology where he received a B.S. in geology in 1940, then enlisted in the U.S. Army Air Corps as a flying cadet. The Army sent him back to Cal Tech to finish his master’s degree in meteorology, which he accomplished in 1941. He was commissioned on July 1 of that year and spent World War II as a weather officer in the Philippines and at numerous locations in the United States. At the end of the war, the Army offered him an opportunity to continue his studies at the University of California-Los Angeles (UCLA), where he received his Ph.D. in meteorology and physics in 1952.

After UCLA, Fritz returned to the Air Weather Service (AWS) and was made director of geophysical research at Cambridge Field Station in Massachusetts, where he managed a staff of about 75 civilians and military personnel. Fritz worked with sounding rockets, such as the “Aerobee” and “V-2/Bumper,” which gave him extensive practical experience in putting payloads on rockets.

Following his tour at Cambridge, he was assigned to the Central Intelligence Agency (CIA), where he became the deputy director of the CIA Physics and Electronics Division in the Office of Scientific Intelligence. At the CIA, he developed a close working relationship with the renowned intelligence officer Richard Bissell—a relationship that would prove essential in the eventual development of the Corona Program, the world’s first photoreconnaissance satellite system.

Fritz Oder initiated and supervised many of the engineering decisions in the nascent field of satellite design and launching,

including the development of the Agena upper-stage booster vehicle, built by Lockheed Missiles & Space Company. He also figured prominently in the development of the Atlas, Thor, Titan, and Minuteman missile systems. He centralized satellite engineering to include payload departments, streamlined program management, and established leading-edge approaches to inertial guidance, passive thermal control, and storable propellants. He also directed research and testing of an imaging read-out satellite reconnaissance system, called Samos, that never became operational but laid the groundwork for NRO’s digital satellite systems of the 1970s.

Lockheed Missiles & Space Company, which had a long history of developing classified government programs, was the industry partner for the Corona Program. Lockheed was technical adviser and integrator of all Corona equipment (other than the Thor booster) and centralized the assembly process in facilities in Menlo Park, California. The optics system, which was central to the program, involved a vertical-looking, reciprocating, 70-degree panoramic Itek camera that used special film developed by Eastman Kodak.

The camera was designed to scan at right angles to the line of flight and used image-stabilization processes to improve the visual sharpness of objects on the earth’s surface a hundred miles below. Resolution in the early years was in the range of 35 to 40 feet, but eventually it was improved to the point that objects as small as 6 feet across could be identified. The exposed film was ejected by the Corona satellite in a General Electric reentry capsule designed to be captured by a specially modified C-130 aircraft. The cover name “Discover” was used to maintain the secrecy of the program.

Like many development programs, Corona experienced numerous early setbacks, and there was talk of canceling the program altogether. Finally, on August 18, 1960, Discoverer XIV, after ejecting its recovery capsule, which was subsequently recovered in midair, produced Corona’s first usable reconnaissance photographs, images covering more than 2 million square miles of Soviet territory. Fritz characterized the reaction of photo interpreters to these photographs as “stupendous.”

A reserved and modest man, Fritz Oder was highly regarded by his colleagues in government and industry, but his renown was circumscribed by the veil of secrecy surrounding Corona. He was a dedicated family man, but could not discuss his work with family members or explain the reasons for his frequent absences from home. When he reviewed his travel records at the end of one year, he realized he had been away from home 48 of 52 weeks. Despite the importance of his work, he realized the toll it took on his family, and so, on September 20, 1960, after 20 years in the Air Force, he retired.

He immediately went to work for Eastman Kodak in Rochester, New York, as director of special projects, with a staff of about 1,000 engineers. Once again, now at Kodak, he worked primarily on NRO projects. But he also was involved in the Lunar Orbiter Program, which used electronic photoreconnaissance techniques similar to those used by Samos to identify possible landing sites on the Moon.

In 1966, after more than five years at Eastman Kodak, Fritz and his family moved back to California, where he joined Lockheed Missiles & Space Company as a vice president in the Space Systems Division. In 1970, he became program manager for the NRO program that launched the world’s first near-real-time imaging-reconnaissance system.

All told, his career in national reconnaissance spanned 28 years, from 1956 to 1984, the year he retired from Lockheed. During that time, NRO acquired, launched, and operated many of its most sophisticated imaging and signals reconnaissance satellite systems. Fritz’s work helped minimize technical risks and hold down costs for these state-of-the-art NRO programs.

After retiring from Lockheed, Fritz became an independent consultant. Under contract to NRO, he coauthored a history of Corona, which was completed in the late 1980s, long before the facts about this revolutionary program were declassified in 1995. He also contributed to classified histories of other space programs and advised the Air Force Space Division on its Titan launch vehicle. He was also the author or coauthor of many other classified and unclassified publications.

In addition to being named an NRO pioneer and an inductee to the Air Force Space and Missiles Hall of Fame, his many awards included the Legion of Merit for Accomplishments as program director, First Air Force Space Program (WS-117L). He was affiliated with Sigma Xi, was on the Board of Governors of the National Space Club, and was a member of the Cosmos Club.

In 2000, at the age of 80—after the fall of the Berlin Wall but before the terror attacks of 2001—Fritz Oder gave an extended interview to NRO historians about his life and career. His closing assessment of the risks facing the world was prescient: “The NRO and its leadership are confronted by a world that probably is more dangerous in the 21st century than it was when we were working on our projects during the Cold War. We mainly had the Soviet Union to deal with, whereas in the 21st century there are more numerous threats. The U.S. continues to need accurate, timely information on a range of potential adversaries, yet national reconnaissance alone cannot provide all of the answers. There is a continuing need for high-quality human intelligence in addition to the unique systems and capabilities provided by the NRO.”

Dr. Coffman wishes to thank the National Reconnaissance Office for its invaluable help in preparing this tribute.

Next: Ronald Samuel Rivlin »
Memorial Tributes: Volume 12 Get This Book
×