Get This Book
Visit NAP.edu/10766 to get more information about this book, to buy it in print, or to download it as a free PDF.
« Previous: Alexander R. Troiana
Page 320 Share Cite
Suggested Citation:"Alan Manners Voorhees." National Academy of Engineering. 2008. Memorial Tributes: Volume 12. Washington, DC: The National Academies Press. doi: 10.17226/12473.
× 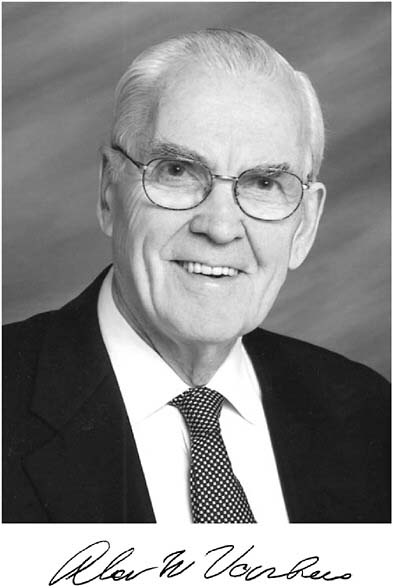 “For the discovery and application of the quantitative relationships between urban land uses and traffic flows.”

BY THOMAS B. DEEN

ALAN M. VOORHEES, engineer, planner, entrepreneur, and philanthropist, died unexpectedly on December 18, 2005, in Richmond, Virginia. He had just returned to his hotel room after attending a party for his 83rd birthday.

As an urban transportation planner early in his career, Alan developed novel techniques for planning large portions of the interstate highway system in large urban areas. He established an engineering firm that worked on transit and highway plans in scores of cities around the world, later served in leadership positions in academia, and then helped to establish a number of private firms in land development, transportation, software development, business machines, space exploration, and information systems.

Alan was born in 1922 in New Brunswick, New Jersey. His father, a stockbroker, died when he was 7 years old, and his mother raised him alone until she remarried when he was a teenager. As fate would have it, his stepfather was the father of Al’s best friend, Fred Zimmerli, who then became his half-brother.

After a brief stint at Rensselaer Polytechnic Institute, Al enlisted in the Navy during World War II and trained as a U.S. Navy frog man (now called Navy Seals) with the rank of Lt.(JG). He was part of an elite Navy unit called UDT-11 (Underwater Demolition Team 11), a unit featured in an exhibit at the

Navy UDT-Seal Museum in Fort Pierce, Florida. Al was in the vanguard of several amphibious Allied invasions of Japanese-held islands in the Pacific. His team swam ashore, often under heavy fire, to clear mines, map enemy defenses, and scout enemy positions in advance of landings by the Marines. His maps helped guide the Allied invasions of Okinawa and Borneo. Just days after the nuclear blast in Nagasaki, Japan, he was among the first American troops who cleared the port for Allied use. Al was awarded the Silver Star, Bronze Star, and Presidential Unit Citation.

After the war, Al returned to Rensselaer, where he earned his degree in civil engineering in 1947; he then moved to Massachusetts Institute of Technology, where he earned his master’s degree in city planning. He also renewed his courtship of Nathalie Potter, a tall attractive linguist who was then working for U.S. Senator Styles Bridges of New Hampshire, her home state. Nathalie and Al were married in 1949.

In 1952, Al completed the Yale University traffic program. While at Yale, he also developed the “gravity model,” the first successful technique for forecasting urban travel patterns based on future land-development patterns. He published this groundbreaking work, “A General Theory of Traffic Movement,” in the Proceedings of the Institute of Traffic Engineers in 1955.

In 1949, he began his working career as the first city-planning engineer for Colorado Springs, Colorado, for which he developed a master plan for land use and transportation. He was also a member of a committee that put together a proposal for bringing the Air Force Academy to Colorado Springs.

In 1952, he became planning engineer for the Automotive Safety Foundation, a nonprofit corporation in Washington, D.C., where he further developed and applied his novel methodology of forecasting urban travel and assisted the federal government in developing computer programs for American cities that needed metropolitan-transportation plans, which were required by law before federal funds could be used for construction of urban portions of interstate highways. Al’s gravity model and its later derivatives were soon in standard

use by transportation engineers and planners throughout the world for planning and designing highway, mass-transit, and other systems. During these early years in Washington, Al moved his wife Nathalie and their three young children into a house he designed and built (with his own hands).

In 1961, he organized Alan M. Voorhees and Associates (AMV), a transportation-planning and engineering firm that became one of the largest firms of its kind in the country, with branches in 10 U.S. cities and six foreign countries. During the next two decades, AMV prepared transportation plans for new national capitals, including Canberra, Australia, and Abuja, Nigeria. The company was also responsible for transportation networks around the New York World Trade Center, which was then in the planning stage.

In 1967, AMV was bought by Planning Research Corporation, although AMV remained an independent subsidiary, and, in 1977, Al became dean, College of Art, Architecture and Urban Sciences at the University of Illinois, Chicago Circle, where he was responsible for coordinating education in the various disciplines of the college and the School of Engineering.

In 1979, Al left academia and returned to Washington as an entrepreneur. He had earlier invested in and led Data Terminal Systems Inc., a firm that developed the bar code system used in retailing today. He then launched Atlantic Southeast Airlines (ASA), which was one of the most successful commuter airlines in the country. ASA carried more than 4 million passengers annually and served 56 markets. Al was chairman of the ASA

Board of Directors, and the company eventually became part of the Delta Airlines network. Later he and a partner led Microsystems Inc., a small company that provided point-of-sale systems for hotels (e.g., reservations, room management, etc.); the company grew to become a $700 million enterprise. Al also invested in and provided leadership for other small firms that grew into major companies, such as Ideas Inc. (provider of hi-tech hardware to the U.S. Department of Defense and NASA) and Autometrics Inc., a company that made mapping and software for satellite reconnaissance and was finally sold to Boeing.

He then turned his hand to real-estate development and built Hamilton Court, a mixed-use development in the Georgetown section of the District of Columbia, and properties in a historic district in Richmond, Virginia. He bought a farm, now a popular fruit and berry farm, in Westmoreland County on Virginia’s Northern Neck and donated 750 acres for use as a nature preserve. He also established a space satellite launching enterprise and organized a firm, Summit Enterprises in Woodbridge, Virginia, to oversee and coordinate his extensive business interests.

Al’s investment prowess was legendary, and his assets grew exponentially. He was frequently listed as one of the wealthiest individuals in the Washington area. He gave generously to numerous civic, environmental, and educational causes, funded new buildings at Rensselaer Polytechnic Institute, and established the Voorhees Transportation Center at Rutgers University. He also organized the Nathalie P. Voorhees Center for Neighborhood and Community Improvement at the University of Illinois in Chicago and helped establish the Council for Excellence in Government, a nonprofit organization dedicated to results-oriented leadership and innovations in government institutions at all levels. He was a member of the board of Voorhees College, a historically black institution in Denmark, South Carolina, and provided significant financial support for its operation.

In later years, Al became interested in historical conservation, and he began collecting antique maps and books. Experts have

called his collection of more than 300 maps the “best in private hands.” When an important map came up for sale in London, he flew across the Atlantic on the Concorde, without telling his wife where he was going, bought the map, and returned home the same day. He divided his collection, worth several million dollars, among the Library of Congress, Library of Virginia, and Virginia Historical Society. He organized a campaign to have the map collection of the Library of Congress photographed and digitally preserved.

At the time of his death, Al was on the steering committee of “Jamestown 2007,” a group planning the 400th anniversary celebration of the settlement of Jamestown, Virginia, and had contributed to archeological explorations that have resulted in important discoveries related to the founding of Jamestown. He was also known for his expertise and extensive collection of fine wines.

Al received many honors. He was chairman of the Executive Committee of the National Research Council Transportation Research Board and president of the American Institute of Planners. He was elected to membership in the National Academy of Engineering in 2000, and he received honorary doctorates from Rensselaer Polytechnic Institute and Voorhees College. He received the Institute of Transportation Engineers Past Presidents Award in 1955, the first American Society of Civil Engineers Harland Bartholomew Award, and, in 1982, was selected honorary member of the Institute of Transportation Engineers. He was the first chairman of the Center for Geographic Information at the Library of Congress and was a member of several boards devoted to the history of Virginia.

People who knew Al well frequently commented on his modesty and willingness to stay out of the limelight. The Washington Post noted in his obituary that, “His work quietly affected the lives of countless people, yet Voorhees maintained such a low public profile that he was all but unknown in Washington, where he had lived since 1952. He moved below the Beltway radar, staying out of politics and the local party scene.” His name made headlines only when he made a generous gift to a major educational institution or conservation group.

Even his family and close friends were not aware of his diverse contributions until his death when friends and associates from many different fields came forward with stories of his generosity.

“Al made a huge difference in the way our society is today, and he did it behind the scenes,” said Gary L. Fitzpatrick, former senior specialist for digital programs at the Library of Congress, who knew Voorhees as a map collector. Everyone who knew Al, whether as a map collector, businessman, academic, engineer, planner, or philanthropist, recognized that he made a profound and significant difference.

Al is survived by his three children, Susan, Scott, and Nancy, six grandchildren, and two brothers. Nathalie predeceased him in 2000. His daughter remembers that Al and Natalie especially enjoyed spending time on their farm with their children and grandchildren.

Next: Paul Weidlinger »
Memorial Tributes: Volume 12 Get This Book
×