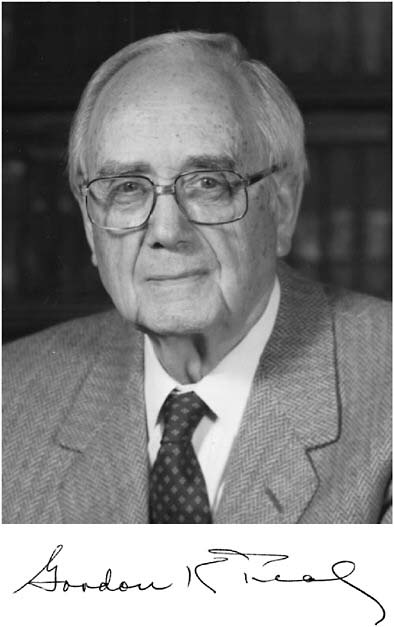 “In recognition of his pioneering research on single crystals of germanium and silicon and his co-invention and reduction to practice of the single crystal grown junction transistor, contributions which must be ranked among the most critical and essential to the development of the semiconductor industry and electronics.”

GORDON K. TEAL, a key participant in the development of the transistor, died on January 7, 2003, at the age of 95. The first transistors, fabricated in polycrystalline germanium at Bell Labs, were unstable and exhibited erratic behavior. Gordon recognized that grain boundaries and other defects characteristic of polycrystalline materials were the likely reasons for this poor performance. He managed to prepare small single crystals and, with remarkable perseverance, convinced his colleagues at Bell Telephone Laboratories to test transistors fabricated from them. The results were dramatic improvements in transistor stability and reproducibility.

Gordon Teal was born January 10, 1907, in Dallas, Texas. He graduated from high school with the highest scholastic average in Dallas and went on to earn a bachelor’s degree in physics and chemistry from Baylor University and a doctorate in physical chemistry from Brown University. While a student at Brown, Gordon studied germanium, an exotic material that fascinated him, partly because of its “uselessness.”

In 1930, he joined Bell Telephone Laboratories, where his early assignment involved materials for television components, and, during World War II, high-performance rectifiers for radar systems. Working near the transistor development group at Bell Labs, Gordon soon recognized the significance of the transistor, which would also give him an opportunity to work with his favorite element, germanium. Initially his appeals for using single crystals of germanium for transistor fabrication were met with little interest. Eventually, however, he convinced his supervisors to allow him to work on the growth of single crystals, but only after normal working hours. Because of a shortage of laboratory space, Gordon and his colleague, John Little, had to mount their crystal-growing equipment on wheels so it could be rolled into a closet when they finished their experiments each night.

Crystals grown in the Teal-Little “puller” dramatically improved electronic properties in comparison with conventional polycrystalline crystals. The absence of grain boundaries decreased the trapping of charge carriers, and the single-crystal growth process itself further purified the germanium. After the demonstration of enhanced performance and reproducibility in transistors fabricated from single crystals, Bell Labs established an entire group devoted to growing semiconductor crystals. Gordon and another colleague, Morgan Sparks, later developed the double-doping technique that led to the creation of the junction transistor.

In 1952, Gordon returned to Texas as director of the first research department at Texas Instruments (TI), where he assembled a group of talented scientists and engineers to work toward the development of silicon transistors. At the time it was generally recognized throughout the infant semiconductor industry that silicon would be a superior material to germanium for transistors. Unfortunately, silicon crystals were difficult to grow, but Gordon’s perseverance paid off again, and the group succeeded in producing them. Gordon announced the breakthrough at the 1954 meeting of the Institute of Radio Engineers in Dayton, Ohio, where he demonstrated the superior temperature tolerance of silicon

transistors by dunking the amplifier of a record player in hot oil. The commercial silicon transistor was a milestone in the growth of TI and the semiconductor industry.

In 1965 Gordon took a two-year leave of absence from TI to become the first director of the Institute of Materials Research in the National Bureau of Standards. Afterwards he returned to TI and served as vice president and chief scientist for corporate development until his retirement in 1972.

Gordon received many awards and honors for his accomplishments. The Patent, Trademark, and Copyright Institute named him Inventor of the Year for 1966. Two years later, he received the IEEE Medal of Honor, and a year after that, in 1969, he was elected to the National Academy of Engineering “For essential contributions to the development of the semiconductor and electronic industries.” The American Chemical Society honored him with its Award for Creative Invention in 1970, and in 1984, he received the IEEE Centennial Award.

Gordon met his future wife, Lyda Louise Smith, while he was an undergraduate at Baylor, and they were married in New York in 1931. Gordon and Lyda had three sons, Robert, Donald, and Stephen. The Teals were active in civic and cultural organizations. Gordon was on the board of directors of the Dallas Museum of Contemporary Art and the Texas Fine Arts Association. His family remembers him for his devotion to them, his loyalty to friends, and his kindness and sense of humor. The world of electronics will remember him for his pioneering contributions to the growth of the semiconductor industry.

Next: Alexander R. Troiana »
Memorial Tributes: Volume 12 Get This Book
×