Get This Book
Visit NAP.edu/10766 to get more information about this book, to buy it in print, or to download it as a free PDF.
« Previous: Milton Clayton Shaw
Page 268 Share Cite
Suggested Citation:"Shan-Fu Shen." National Academy of Engineering. 2008. Memorial Tributes: Volume 12. Washington, DC: The National Academies Press. doi: 10.17226/12473.
× 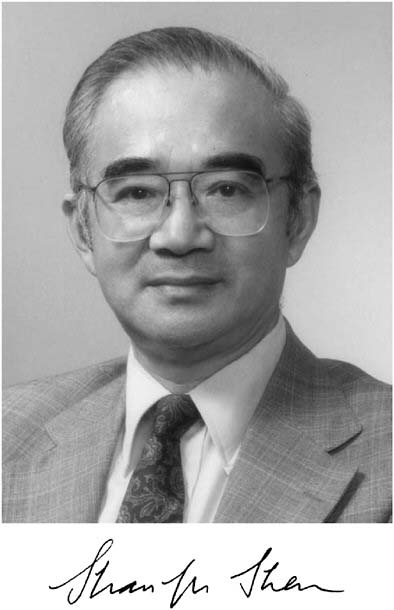 “For fundamental contributions to aerodynamics and non-Newtonian fluid mechanics.”

SHAN-FU SHEN, professor emeritus of mechanical and aerospace engineering at Cornell University, passed away after a short illness in Ithaca, New York, on December 22, 2006. He was 85 years old.

Born in Shanghai, China, in 1921, Professor Shen received the bachelor of science degree in 1941 from the National Central University in Chunking. After achieving the rare distinction of placing first in the two most presitigious nationwide scholarship competitions for pursuing graduate studies abroad, he elected to come to the U.S., where he completed, brilliantly, at Massachusetts Institute of Technology (MIT), his Sc.D. in 1949. His thesis advisors were C.C. Lin and H.S. Tsien.

Following two years as a research associate at MIT, Dr. Shen joined the faculty of the Aeronautical Engineering Department of the University of Maryland, where he soon became a full professor. In 1961, after 11 years at Maryland, he was convinced by W.R. Sears to become a professor in what was then the Graduate School of Aeronautical Engineering at Cornell University, where he remained for the rest of his professional career. A distinguished scholar in aerodynamics, fluid dynamics, and heat transfer, Shan-Fu Shen taught and advised Cornell undergraduates and graduate students, conducted his own research, and guided others until his retirement in 1991 as the John Edson Sweet Professor Emeritus.

During his career, a number of special appointments attest to his international interests and distinction. He was a Guggenheim Fellow at the Eidgenössiche Technische Hochschule, Zürich, in 1957. He served as a visiting professor at more than 10 international academic institutions, including the University of Paris (1964 and 1969), the Technical University of Vienna in 1977, the Institute of Space Sciences at the University of Tokyo in 1984–1985, and three universities in China. He was also an honorary professor at his alma mater, the Southeast University (formerly National Central University) in Nanjing, China. Dr. Shen was a consultant to the David Taylor Ship Research and Development Center of the U.S. Navy on matters concerning the seaworthiness of marine vessels in rough seas, the dynamics of giant helicopters with circulation-controlled rotors, and design modifications of aircraft for carrier landing.

Professor Shen’s work over the years is striking for its diversity. He made important contributions in transonic and hypersonic aerodynamics; aeroelasticity; finite-element methods for aerodynamics; hydrodynamic stability (including a notable review of the subject in the Princeton Series in High Speed Aerodynamics and Jet Propulsion); the kinetic theory of gases; non-Newtonian flows, including modeling of polymer flows with heat transfer; rarefied gas dynamics; and most recently, the theory and computation of boundary-layer separation, especially in unsteady flow over maneuvering bodies.

From 1974 to 1988, with Professor K.K. Wang (NAE, 1989), he was co-principal investigator of the Cornell Injection Molding Program (CIMP), a pioneering research project supported by the National Science Foundation. This program, conceived and led by Professor Wang, was established to help manufacturers solve problems related to the production of plastic parts. In 1979, an industrial consortium was established enabling more than 50 major corporations throughout the world to benefit from the results of CIMP.

The goal of CIMP was to establish a scientific basis for solving practical problems of injection molding, and Shan-Fu Shen contributed the theoretical understanding of relevant fluid mechanics and heat-transfer issues. His research with colleagues

and graduate students on transient and nonisothermal flow and solidification in polymeric materials contributed significantly to the success of the program. With C.A. Hieber, he published an article in the Journal of Non-Newtonian Fluid Mechanics in 1980, showing that their predictions of flow-front positions and cavity pressure distributions agreed very well with experimental results. The efficient numerical scheme they developed paved the way for further advances in the analysis of flow and solidification of polymer melt in realistic mold cavities. Shan-Fu Shen’s studies of non-Newtonian flow and properties of polymer melts are widely recognized for enabling the efficient design and manufacture of countless plastic parts in modern electronics and consumer products.

In recognition of his wide-ranging contributions to engineering science, Shan-Fu Shen was elected to the National Academy of Engineering in 1985. He also received many other awards: Achievement Award and fellow of the Washington Academy of Sciences in 1958; corresponding member of the International Academy of Astronautics in 1969; in Germany, the Alexander von Humboldt Senior Award in 1975; and a member of the Academia Sinica (Republic of China) in 1972.

Professor Shen always showed a great sense of responsibility for the fortunes of his graduate students, and they attest that they were inspired by his integrity, decency, and imagination, as well as his scientific insights, rigorous standards, and occasional severity. W.G. Habashi, now of McGill University, especially

remembers his final oral Ph.D. exam and the difficult and uncompromising questions posed by Professor Shen. He also remembers Dr. Shen’s friendly concern for his subsequent career and his urging that he be independent, move beyond his thesis subject, and try new things.

Shan-Fu Shen’s faculty colleagues at Cornell remember him as a serious-minded but warm and helpful friend. K.K. Wang, recalling his association with him in the injection-molding program, says that at a critical time when he needed a partner to initiate interdisciplinary research on injection molding of plastics, Shan-Fu stepped in, and, for the next 14 years, generously contributed his vital expertise in fluid mechanics and heat transfer. During that time, he was always a sincere and constructive critic, a reliable advisor, and a major contributor in matters of computational fluid mechanics. Shen-Fu was highly regarded not only by students and research staff in CIMP, but also by program participants from industry and other institutions. Professor Wang adds, “He will be remembered fondly by all of us who worked closely with him for so many years.”

Shan-Fu Shen was devoted to China and Chinese culture. At the age of 11, he lost his father, a University of Michigan graduate in civil engineering. Shan-Fu grew up as a self-reliant and exemplary eldest son, constantly striving for excellence. A classic Confucian scholar, his interests were also diverse and wide ranging, and included a great affinity for music, history, calligraphy, photography, and even horticulture and culinary arts.

He was devoted to his family—his wife Ming-Ming and their son Hsueh-Yung and daughter Hsueh-Lang, who all survive him. He was very proud of the musical talents and accomplishments of Ming-Ming and both his children. He was also a proud host of many dinners at his home, at which Ming-Ming showed her mastery of classical Chinese cuisine, to the delight of their privileged guests!

Next: Alan F. Shugart »
Memorial Tributes: Volume 12 Get This Book
×