Get This Book
Visit NAP.edu/10766 to get more information about this book, to buy it in print, or to download it as a free PDF.
« Previous: Vivian T. Stannett
Page 298 Share Cite
Suggested Citation:"David Tabor." National Academy of Engineering. 2008. Memorial Tributes: Volume 12. Washington, DC: The National Academies Press. doi: 10.17226/12473.
× 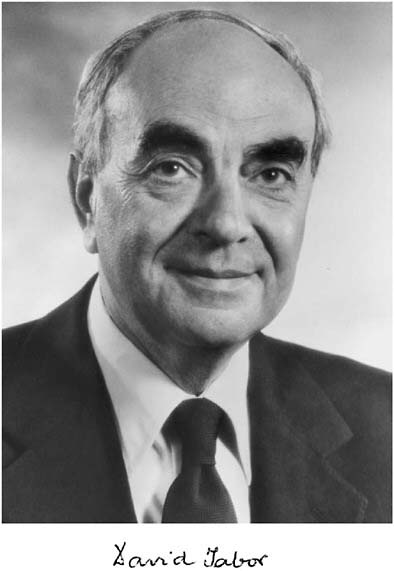 “For contributions to the theory of tribology, hardness, and surface physics.”

WE WERE SADDENED to learn of the death, on November 26, 2005, of David Tabor FRS. He died in Cambridge, England, at the age of 92 after a long illness. One of the foremost tribologists of his generation, he was also a major figure in physics and a remarkable person. He was the author of the first paper published in the first issue of Wear, in 1957, and he maintained remarkable ties to that journal, where this obituary was first published.

David Tabor (later known as DT) was born on October 23, 1913, in London, England, to parents who had emigrated from Russia; his father had been an armorer in the Russian imperial army. After undergraduate study at the Regent Street Polytechnic and the University of London (in Imperial College), he moved to Cambridge in 1936 to undertake research in the Department of Chemistry under the supervision of Frank Philip Bowden, a collaboration that lasted until Bowden’s death in 1968. Their first joint publication in 1939 on the area of contact between surfaces established the crucial point that the real area was generally much smaller than the apparent area. This basic principle was fundamental to much of their subsequent work.

At the outbreak of World War II, Bowden, who was Australian and was visiting his home country at the time, was persuaded by the Australian government to set up a research group at Melbourne University to work on the practical problems of lubricants and bearings. DT joined the new laboratory in 1940 and was its head for a short time (1945–1946), when Bowden returned to Cambridge. At that point, at Bowden’s behest, DT suggested the name “tribophysics” to describe their activities, and the Tribophysics Section, which became the CSIRO Division of Tribophysics in 1948, thrived until 1978, when its name was changed to the Division of Materials Science.

While in Australia, David met and married his wife, Hanna. The Tabors rejoined Bowden in Cambridge in 1946 and remained there for the rest of David’s life. The research group at the University of Cambridge, founded by Bowden and led by DT from 1968 until his official retirement in 1981, moved eventually from the Department of Physical Chemistry to the Department of Physics (the Cavendish Laboratory) and changed names several times. For much of its existence, however, it has been the Physics and Chemistry of Solids, and for those fortunate enough to have worked there, it will always be PCS, and David Tabor will always be DT. Despite changes of name, the subject and approach to research pursued by DT and his research group remained constant—to generate a deeper understanding of the physical sciences relevant to problems related to solid surfaces and their interfaces, and especially the science of solids in moving contact now known as tribology,

The laboratory was a carefully managed, almost self-contained research institute with a remarkable reputation complemented by a “family-like” atmosphere. Visitors came from all over the world for long or short periods, and DT, who had a gift for languages, took pride in welcoming each of them in his or her mother tongue. He could probably have done this in at least 17 languages.

DT’s monograph, The Hardness of Metals (1951 and now reissued), based on his early studies of the area of contact between metal surfaces and his wartime research, is still a readable and authoritative account of the scientific basis

of indentation hardness and one of very few books on this important topic. In two classic volumes, published with Bowden, The Friction and Lubrication of Solids (1950) and The Friction and Lubrication of Solids, Part II (1964), the authors summarized, in elegant prose and with scrupulous acknowledgments of contributions from other research groups, the work done in PCS over two decades on subjects that are now considered the cornerstones of tribology—contact between solids; friction of metals and nonmetals; frictional temperature rise; boundary lubrication and other chemical effects; adhesion; sliding wear; and hardness.

For three decades, DT and his research group continued to make seminal contributions in these areas, characterized by careful, often highly innovative experimentation, thoughtful analysis, and comparisons with theoretical models. DT went on to work on innovative studies of organic polymers, colloid forces, ultra-high-vacuum manipulation, vacuum spectroscopy, the surface of diamonds, and adhesion between solids, especially by van der Waals forces, and other topics. This wide range of interests provided a basis for DT’s unique contributions to tribology.

DT retired almost exactly 25 years ago but kept an office in the Cavendish Laboratory, which hosts the polymers and colloids group, two subjects DT pioneered, and has been renamed in his honor. DT also held a visiting post at Imperial College for several years. With a keen sense of the applicability of his research, he recognized, well before the concept became fashionable, that an interdisciplinary approach was essential to the study of tribology. Forty years ago he wrote, “The contribution that the physicist can make to tribology will be greatly increased by effective and enlightened collaboration with the chemist, metallurgist, and engineer.”

In his characteristically modest and unassuming way, DT played a leading role in developing and promoting tribology in the U.K. scientific community and in founding and chairing the Tribology Group of the Institute of Physics in 1981. The Institute of Physics has just established the Tabor Medal in his memory, to be awarded for distinguished research in surface

or nanoscale physics. Tabor’s achievements were recognized by his fellowship of the Royal Society (1963), the first Tribology Gold Medal awarded by the Tribology Trust (1972), the Guthrie Medal from the Institute of Physics (1975), and the Royal Medal awarded by the Royal Society (1992). DT was also well known and highly regarded outside the U.K., where his wide-ranging interest in other cultures and languages had facilitated contacts with tribologists worldwide. He was elected a foreign associate of the National Academy of Engineering in the United States in 1995.

DT’s son remembers him as deeply attached to traditional Judaism, which shaped and guided his exemplary conduct toward others, whatever their background or beliefs. He had a deep love of Hebrew literature and a wide range of intellectual and cultural interests. He was a devoted son, husband, and father; a loyal friend; and a wonderful role model for his sons.

He is survived by his wife, Hanna, and their two sons, Daniel and Michael.

Everyone who had the privilege of knowing David Tabor will remember him with affection as a humane, gentle, and intelligent man who inspired many generations of tribologists.

Next: Chen-To Tai »
Memorial Tributes: Volume 12 Get This Book
×