Get This Book
Visit NAP.edu/10766 to get more information about this book, to buy it in print, or to download it as a free PDF.
« Previous: Maxim A. Faget
Page 122 Share Cite
Suggested Citation:"Richard H. Gallagher." National Academy of Engineering. 2008. Memorial Tributes: Volume 12. Washington, DC: The National Academies Press. doi: 10.17226/12473.
× 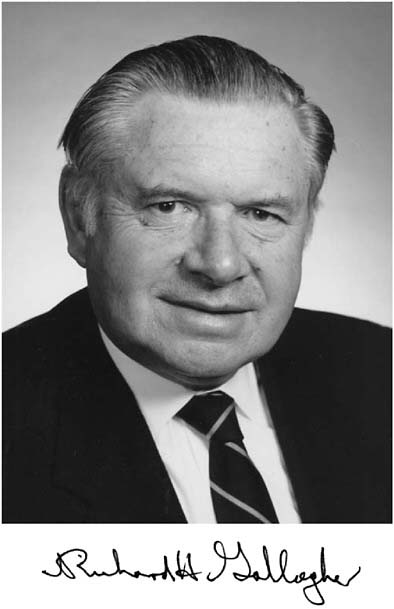 “For outstanding contributions to finite element theory, to its dissemination to engineering practice, to teaching, and to administration of engineering education.”

RICHARD H. GALLAGHER, a pioneer of the finite-element method (FEM) in industry, who later had a distinguished career as an engineering dean, provost, and university president, died of cancer on September 30, 1997, in Tucson, Arizona, at the age of 69. He received the highest honors for his work not only as an industry expert but also as a teacher, mentor, and academic leader. Internationally known and widely honored for his expertise in engineering mechanics and his pioneering work on FEM, a fundamental mathematical technique used throughout the world in computer simulations of engineering behavior, Gallagher’s efforts paved the way for the development of a multibillion dollar industry and thousands of careers and improved millions of lives.

Born on November 17, 1927, in New York City, Gallagher described his early decision to become an engineer as an afterthought. Following his service in the U.S. Navy during World War II, he enrolled at New York University (NYU), where he “checked off civil engineering as a major, thinking that it might be interesting to build bridges.” After earning a master’s degree from NYU and working for the Federal Aviation Administration and the Texas Company, he moved in the 1960s to the Buffalo area, where he created a premier development group in aerospace structural analysis at Bell Aerosystems; he eventually became assistant chief engineer at Bell.

Gallagher led the development of finite-element analysis methods that took advantage of the capabilities of digital computers to enable the unprecedented design of complex structures. His book, Finite Element Analysis Fundamentals, was translated into seven languages. His success in securing grants and funding enabled him to compete successfully with much larger organizations for top talent, and his groups at Bell included top engineers and researchers in matrix analysis, rocket analysis, dynamics, inelastic analysis, optimization, fracture, and composite materials. Under his guidance, Bell researchers pioneered the development of FEM, including inelastic analysis, design optimization, composite materials analysis, linear fracture applications, thermal analysis methods, solid- and shell-element formulations, and the super-element substructuring technique.

While working in industry, Gallagher also published seminal publications, including papers in refereed journals and his first book, A Correlation Study of Matrix Methods of Structural Analysis (Pergamon Press, 1964). In his early work, he expanded the practice of finite-element analysis from two-dimensional to three-dimensional analysis, from structural analysis to heat-transfer analysis, from linear analysis to nonlinear analysis, and from aerospace applications to civil engineering applications. During this time, he also made his first presentation at an international conference, in Germany, the first of his invited visits to 78 countries on six continents.

Still working at Bell, Gallagher taught engineering courses and pursued doctoral studies at the State University of New York (SUNY)-Buffalo, where he earned the school’s first Ph.D. in engineering in 1966. Shortly thereafter, he became a full professor of civil engineering at Cornell University, where he was soon appointed chairman of the Department of Structural Engineering. Under his leadership, the reputation of the department improved markedly, particularly in the Master of Engineering Program, a fifth-year professional degree that prepared students to become practicing engineers. The department also offered traditional research-oriented graduate degrees. With first-rate faculty, Cornell was soon

recognized as one of the top civil engineering schools in the nation.

During his 11 years at Cornell, Gallagher published two key works that established his legacy in the field. Finite Element Fundamentals (Prentice-Hall, 1975), a textbook, was eventually published in seven languages and sold more than 40,000 copies. He was also founder and editor of the International Journal of Numerical Methods in Engineering, which was recognized as the authoritative professional journal in its field and one of the best-selling journals for its publisher, John Wiley and Sons; his tenure at the journal lasted for 27 years. Gallagher ultimately published 20 books and 120 papers, including Matrix Structural Analysis, with W. McGuire (J. Wiley Book Co., 1979) and Optimum Structural Design (J. Wiley Ltd., 1973).

In 1978, he embarked on a career as an academic official when he was named dean of the School of Engineering at the University of Arizona. During his tenure there, he pioneered innovative programs, particularly in distance learning for professionals. After he retired in 1995, he remained a professor in residence in the Aerospace and Mechanical Engineering Department for the rest of his life. In 1984, he accepted a position as provost of Worcester Polytechnic Institute in Massachusetts, where he was instrumental in promoting policies that dramatically improved the faculty and reputation of the school.

In 1988, he was named president of Clarkson University in Potsdam, New York, where he guided the school through challenging economic and demographic changes. During his eight-year tenure, several new academic and graduate programs in engineering were introduced, a Center for Advanced Material Processing (CAMP) was constructed, as were a campus center and a 3,000-seat hockey arena. In addition, a major fundraising campaign more than doubled the school’s endowment. In 1996, Clarkson dedicated the Richard H. Gallagher Laboratories, a facility with more than 120 laboratories in the CAMP complex, to honor “a man whose vision and leadership in Clarkson’s first century laid a strong foundation for a second century of excellence.”

Among the many honors Dr. Gallagher received were the Worcester Reed Warner Medal and ASME Medal from the American Society of Mechanical Engineering, the John Von Neumann Medal from the International Association of Computational Mechanics, the Structural Dynamics and Materials Award from the American Institute of Aeronautics and Astronautics, and the Chancellor Furnas Medal from SUNY-Buffalo. The American Society of Engineering Education (ASEE) also awarded him the Lammé Medal, which ASEE considers its highest honor, and elected him to the ASEE Hall of Fame in 1993. He was elected to the National Academy of Engineering (NAE) in 1983 and was the first North American to be awarded an honorary doctorate from Shanghai University of Technology. He also received honorary doctorates and fellowships from the Technical University of Vienna, University College of Swansea, Wales, and Clarkson University. He was a Fulbright Fellow in Australia in 1973 and a visiting professor at universities in Japan, the United Kingdom, and India.

Gallagher’s professional career is chronicled in Early FEM Pioneers, by John Robinson (published in the United Kingdom), and he is listed in six different editions of Who’s Who. Despite all of these honors, he considered his greatest legacy to be the development of talent in others. He was always closely involved not only with his professional colleagues but also with his graduate students, who came from all over the world to study with him. He gave unstintingly of his time to those around him, and a great many people in engineering and academia, many of whom became leaders in their fields, owe their careers to his mentoring.

In his personal life, Dr. Gallagher was happily married for 45 years to his wife, Terese (Terry), with whom he had four sons and a daughter. In 1983, when he was inducted into NAE, Dr. Gallagher was singled out in the NAE quarterly, The Bridge, as the first member whose five children, all engineering students, went on to pursue graduate work and successful technical and business careers. A memorial symposium and dinner held in early 1998 (and recorded on film) at the University of Arizona

was attended by more than 600 people from around the world, including many of his close professional colleagues.

Dick had a terrific sense of humor and insisted that Terry accompany him to 78 countries, six continents, and nine cruises because she shared his wit. They both truly completed each other’s personalities and both had a vigorous love of the “arts.” Whether it was plays, musicals, or museums, they were in the audience applauding heartily. They were also great sports enthusiasts. As president of Clarkson University, Dick and his wife delighted in having good seats for the hockey games, his all-time favorite sport, and he saw to it that the building of a 3,000-seat hockey arena was a top priority. One of his fondest hobbies was “doing in ink” the New York Times crossword puzzle.

His children remember him as the perfect “dad.” He took the boys to visit the Baseball Hall of Fame in Cooperstown and to Yankee Stadium in New York City. Always the teacher, they remember viewing the “Bayeux Tapestries” with the headsets strapped to their heads and then visiting the miniature altar in the bedroom of St. Terese in Liseaux, France. He took them on walks on the beaches of Normandy and to view the crosses of those buried at St. Mere Eglise. He took them to Pearl Harbor to look down at the U.S.S. Arizona where 1,800 sailors died.

In his memory, publisher John Wiley and Sons commissioned the Richard H. Gallagher Prize for Young Investigators in Numerical Methods in Engineering, a cash award and silver medal featuring Dr. Gallagher’s image, to be awarded to talented young engineering faculty at each world congress of the U.S. Association for Computational Mechanics (USACM). Terese Gallagher remains involved in carrying on his legacy, often appearing before audiences of 1,000 or more to present this award. Dr. Gallagher’s work also lives on in his professional contributions, his publications, and the many lives he touched.

Dick is survived by his wife, Terry; their five children, Mary Lee, Richard, William, Dennis, and John; and six grandchildren.

Next: Ivan A. Getting »
Memorial Tributes: Volume 12 Get This Book
×