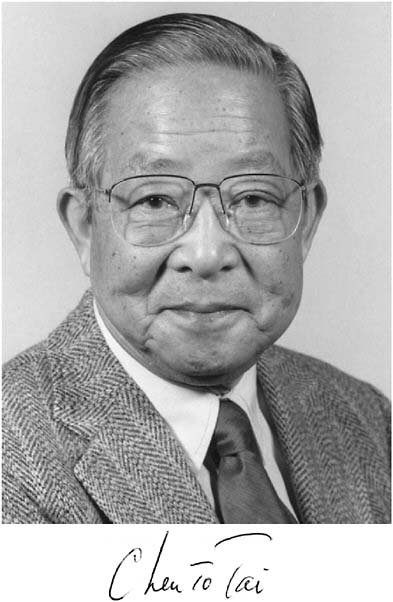 “For basic contributions to the advancement of electromagnetic theory and its application to antenna design.”

CHEN-TO TAI, emeritus professor of electrical engineering and computer science at the University of Michigan (UM) and one of the most respected and influential scientists in electromagnetics and antenna theory, passed away peacefully at his home in Ann Arbor on July 30, 2004.

He was born December 30, 1915, to a family of scholars who were also wealthy landowners in Luzhi Township on the outskirts of Soochow, China. In 1937, he received his bachelor’s degree in physics from Tsing-Hua University, China’s premier institute of higher learning in science and engineering as well as the humanities. He stayed on there as an assistant and also served two years as a communications officer in the Chinese army with the rank of major. In 1943, having obtained a scholarship from Harvard University, he left Kumming and flew to Calcutta (now Kolkata), then traveled across the Indian subcontinent to reach Bombay (now Mumbai); from there he sailed to the United States on a ship called the Cape of Good Hope, which eventually reached New York by way of that same cape. The voyage took 49 days.

For the next six years, Harvard was his home. He received his M.S. in communication engineering in 1944 and the doctor of science degree in 1947; his thesis was entitled “Theory of Coupled Antennas and Its Application.” He was the second doctoral student of Professor R.W.P. King, with whom he remained close friends throughout his life. He continued at the Cruft Laboratory at Harvard as a research fellow until 1949, when he moved west to take a position as research physicist at the Stanford Research Institute in Palo Alto. Some of the technical reports he wrote during this period are still important reference documents.

In 1954, he was appointed associate professor of electrical engineering at Ohio State University (OSU) in Columbus. Two years later, he left to take a faculty position at the Technical Institute of Aeronautics in São José dos Campos, Brazil, where he became proficient in Portuguese. He returned to OSU in 1961 and then, in 1964, joined the faculty of UM as professor of electrical and computer engineering; he also became a member of the Radiation Laboratory at UM. Except for a few years (1967–1969) when he took a reduced appointment to work part time for KMS Industries, he remained at Michigan for the rest of his career. He was made emeritus professor in 1986 and was honored by his colleagues and former Ph.D. students in a special session at the 1985 IEEE International Symposium on Antennas and Propagation and North American Radio Science Meeting held in Vancouver, Canada.

Professor Tai is recognized throughout the world for his research on antenna theory, electromagnetic theory, and applied mathematics. His extension of Hallén’s pioneering work on antennas to coupled cylindrical antennas established the foundation of multielement array antennas, which are used extensively in a variety of radio systems. His refinement of Schelkunoff’s biconical antenna theory provided a much-needed understanding of how antennas can be designed to operate over a wide band of frequencies. His book, Dyadic Green’s Functions in Electromagnetic Theory, published in 1971, popularized the use of Green’s functions for the solution of diffraction-dependent antenna problems.

He also conducted significant work on the electromagnetics of moving media, introduced logical notation for vectors, and rigorously examined the vector calculus, which led to his second book (Generalized Vector and Dyadic Analysis, 1991). In collaboration with Dr. J.H. Bryant, he also showed how physical insights gained from Hertz’s theory of electromagnetism provide an alternative method to obtain Maxwell’s equations.

The years immediately following his retirement were very productive. He refined his prior work on the vector and dyadic calculus and produced a second edition of Generalized Vector and Dyadic Analysis in 1997. In this book, and in several technical articles written about this time, he introduced a logically correct notation and interpretation for the divergence and curl operations. A revision of his earlier book on dyadic Green’s functions was published as a new edition by the IEEE Press in 1996.

In spite of his formal retirement, he continued to be an active member of the Radiation Laboratory at UM. He was always available to students and faculty for technical advice and discussions, and he always left them with a better and deeper understanding of the subject. As a token of his undiminished love for teaching and education, his family and friends created the annual IEEE AP-S Chen-To Tai Distinguished Educator Award in 2000. The first recipient was Professor R.W.P. King.

Throughout his career, Professor Tai received many honors and awards for teaching and research. He was elected a fellow of IEEE in 1962 and was president of the AP-S Administrative Committee in 1971. He received the AP-S Distinguished Achievement Award in 1986 and the IEEE Centennial Medal in 1984, when he was made a life fellow of IEEE. He also received outstanding faculty and teaching awards from OSU and UM and was awarded honorary professorships by Shanghai Normal University, Chengdu Institute of Radio Engineering, and Nanjing Institute of Post and Communication in 1980, 1986, and 1987, respectively. He was elected a member of the National Academy of Engineering in 1987 and received the IEEE Heinrich Hertz Medal in 1998.

As everyone who attended technical meetings with Professor Tai knows, he had a passion for tennis, and his tennis racquet was part of his travel gear. When the Tais came to Ann Arbor in 1964, they bought a house in the country where there was room for a tennis court, which was soon added. In spite of a heart attack (and subsequent quintuple bypass operation) in 1997, Chen-To continued to play tennis until two years before his death.

When the Tais moved into the city, he set up a woodworking shop in the basement of his home, where he made useful wooden household accessories, which were frequently given to friends as gifts. He was also interested in Chinese literature, painting, calligraphy, and music (both Chinese and Western classical). His first book, published in 1971, may be one of the few technical works with a Chinese painting (done by the author) as a frontispiece. He was extremely proud of his Chinese heritage, and in keeping with his Buddhist faith, he was a man of peace.

Everyone who knew Chen-To Tai will remember him as a kind gentleman and scholar who made magnificent contributions to science and engineering and gave generously of himself. He was a dedicated teacher known for the clarity of his lectures and was loved and respected by his students and colleagues. Most important, he was a decent and compassionate human being.

He is survived by his wife Ming, five children, and 10 grandchildren, to whom we send our condolences.

Next: Gordon K. Teal »
Memorial Tributes: Volume 12 Get This Book
×