Get This Book
Visit NAP.edu/10766 to get more information about this book, to buy it in print, or to download it as a free PDF.
« Previous: Stanley Backer
Page 30 Share Cite
Suggested Citation:"William Oliver Baker." National Academy of Engineering. 2008. Memorial Tributes: Volume 12. Washington, DC: The National Academies Press. doi: 10.17226/12473.
× 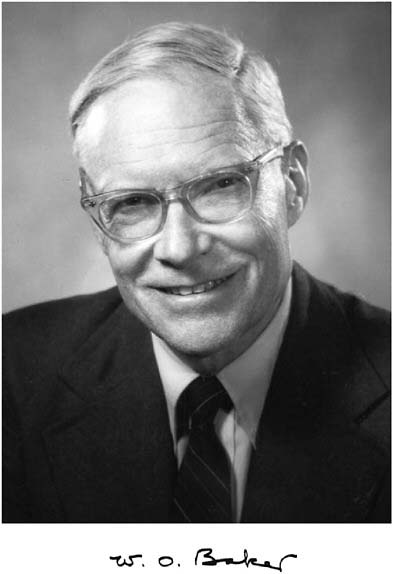 “For contributions leading to the exploitation of synthetic polymers in communications equipment, synthetic rubber, ablation heat shields, and rocket propellants.”

BY A. MICHAEL NOLL

WILLIAM OLIVER BAKER, former president and chairman of Bell Telephone Laboratories, died on October 31, 2005, at the age of 90, after a slow decline in his health. During his last years, many friends and colleagues were able to visit with him at the nursing home where he stayed and where his son Joseph tended daily to his needs. Bill might be characterized as a “diplomat of science” or a “science patriot” for his significant contributions to the nation. He might also be called a “science humanist” for his advocacy of using science for the benefit of humanity.

Bill was an advisor to nearly every president since Truman, including Eisenhower, Kennedy, Johnson, Nixon, and Ford. He had a close relationship with President Eisenhower, who asked him to create the first White House science advisory body and to help create the Defense Communications Agency to facilitate the use of communications technology by the intelligence community. As a tribute to Bill’s contributions to national defense, particularly to intelligence activities during the Cold War, the Security Affairs Support Association established a prestigious yearly award in his name. Bill was the longest serving member of the President’s Foreign Intelligence Advisory Board; he resigned in 1990.

Bill was a board member of many philanthropic organizations, universities, companies, and government agencies, including the Aerospace Corporation, Johnson & Johnson, and Princeton

University. He also had a close relationship with Paul Mellon and was the founding chairman of the Andrew W. Mellon Foundation, which was created from the trusts of Paul and his sister. Bill’s wise, humane counsel was respected and valued by all of the organizations and individuals he advised, and he received many honors, including the National Security Award (1982), National Medal of Science (1988), and Benjamin Franklin Medal of the American Philosophical Society (2000).

He became president of Bell Labs in 1973 and was elected the first chairman of the company in 1979. He retired as chairman of the board in 1980 but continued to come to his office and offer his counsel to those wise enough to appreciate it. Bill was devoted to Bell Labs and the Bell system—both the organization and the people. Although he was offered positions at many other research and academic institutions over the years, he could not be enticed away.

He frequently said that very few people at Bell Labs knew what he really did, and his substantial work outside the company was indeed invisible to most of his colleagues. But our nation today enjoys the results of his influence on many, many aspects of our lives, including education, libraries and information science, chemistry and materials, communications, and national security.

Bill also kept his personal life private, although it is known that he had a strong affection for his beloved wife Frances, who passed away a few years ago, and for his devoted son Joseph, who was his constant companion in the last years of his life.

Bill’s mother, Helen M. Baker, had a considerable influence on him. She married Harold Baker in 1912, and in 1913, the couple purchased a 235-acre farm in Maryland, where they lived from then on. After a few difficult years as general farmers, Helen decided to try raising breeder turkeys. She ultimately became the premier turkey breeder in the United States. When Bill was growing up, he watched as she used various chemicals to treat diseases in her turkeys, which undoubtedly stimulated his interest in chemistry. Helen later wrote a very popular book on turkey breeding, which she dedicated to William.

A simple man who wanted no fancy clothes, cars, or other trappings of wealth and power, Bill was extremely attentive to the people with whom he worked, regardless of their organizational titles. He was always open to new ideas, new ways of doing things, and new people. He was a true innovator and “catalyst,” who motivated and changed everyone with whom he came in contact. Indeed, self-effacing people like Bill who devote themselves to higher pursuits seem to be an endangered species these days. He guided research at Bell Labs through some extremely productive years, championing digital switching and optical communication and steering the Bell system through the razzle-dazzle of digital and electronic technology.

As a young man, Bill enjoyed sailing. He also loved poetry and would frequently quote it in his presentations. Thus, the words of Walt Whitman seem appropriate to memorialize the accomplishments of this extraordinary man:

Sail forth, steer for the deep waters only,

For we are bound where mariner has not yet dared to go,

And we will risk the ship, ourselves, and all.

From Whitman’s poem Passage to India

Note: This memorial tribute is based on materials on the William O. Baker website (williamobaker.org), which was created with the support of the Andrew W. Mellon Foundation. The site includes a biography, list of publications, extracts from selected manuscripts, list of awards, photographs, interviews, and other materials documenting and celebrating Baker’s life and accomplishments.

Next: Howard C. Barnes »
Memorial Tributes: Volume 12 Get This Book
×