Get This Book
Visit NAP.edu/10766 to get more information about this book, to buy it in print, or to download it as a free PDF.
« Previous: Leon E. Borgman
Page 60 Share Cite
Suggested Citation:"Sol Burstein." National Academy of Engineering. 2008. Memorial Tributes: Volume 12. Washington, DC: The National Academies Press. doi: 10.17226/12473.
× 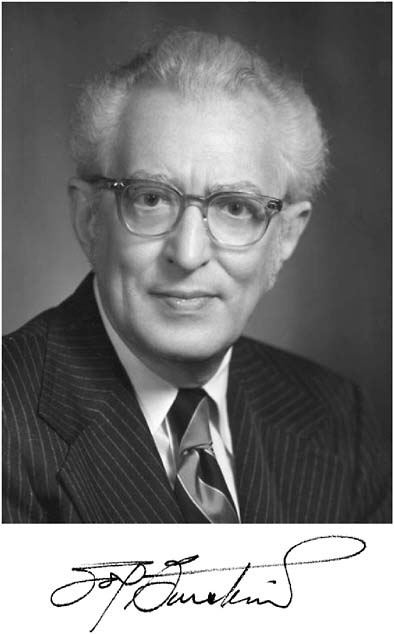 SOL BURSTEIN retired from the Wisconsin Electric Power Company in 1987, capping a highly productive and successful career in power engineering; the design, construction, and operation of nuclear-powered electricity-generating plants; and electric utility management. Sol was the public face of nuclear power for many years; he spent numerous hours testifying before state, federal regulatory, and congressional committees about nuclear power: its promise, its risks, and keeping it safe. Not content to rest on his laurels in his later years, he undertook consulting work—largely pro bono—on nuclear power safety and radioactive waste management. Congestive heart failure led to his death at the age of 79 in Falls Church, Virginia, on January 28, 2002.

Sol was born in Chelsea, Massachusetts, in a tenement building, at 69 4th Street Rear. With $100 that he’d borrowed from his brother Joe, Sol went to Northeastern University on the co-op plan and graduated with a degree in mechanical engineering in 1944. His co-op work, design, and sea trials of Baltimore-class heavy cruisers at Bethlehem Steel’s Fore River Shipyard in Quincy, Massachusetts, became his first job after college. At the shipyard, Sol witnessed a terrible accident: a 360-ton-capacity crane moved a 300-ton load without incident; the second load of only 15 tons snapped a cable and killed

several workers. The accident left a profound impression, and safety became Sol’s obsession for the rest of his professional life.

In the late 1940s, he joined the Stone and Webster Engineering Corporation, where he worked for nearly 20 years as a project mechanical engineer and, subsequently, as a major troubleshooter for the company; his list of service posts ranged round the world, from Jamaica to India, to the Dominican Republic to England. Sol worked on the complete range of projects that Stone & Webster (“S&W” which he used to refer to as “Sweat & Worry”) bid as A&E contractors, everything from building power plants, refineries, distilleries, and chemical processing plants, to converting Los Angeles from DC to 110V AC. In 1963, Sol was posted to Wisconsin Electric Power (WEP) as S&W’s on-site consultant. His job was to develop a plan for modernizing the old moribound utility, whose newest plant had been built in 1929. Three years later WEP hired him as head of the power plant department, where he began executing that modernization plan, which took roughly two decades to complete. Sol moved up the corporate ladder rapidly, becoming vice president in 1967, senior vice president in 1969, executive vice president in 1973, vice chairman of the board in 1984, and finally vice president and director of Wisconsin Energy Corporation, the parent holding company of Wisconsin Electric Power Company, Wisconsin Natural Gas Company, and nonutility energy subsidiaries, Wispark Corporation, Wisvest Corporation, and Badger Service Company.

Sol’s early work was focused on the design of heat cycles for marine applications and then for power plants of all types. Notable early applications were the steam-to-steam thermodynamics of saturated steam-turbine systems and digital computer solutions to complex pipe-stress analyses. His work led to the development of industry codes and standards to ensure the safety and reliability of heat and energy systems.

Sol became involved in work on nuclear power during its early commercial deployment in the United States. He

was responsible for the overall system design, licensing, construction, and operation of two 520-MW nuclear electricity-generating plants, Point Beach 1 and 2, in Two Creeks, Wisconsin. Completed in record time (a little more than four years), these plants began producing electricity in 1970 and 1972, respectively. Point Beach 1 was the fifth commercial nuclear plant to be completed of the 104 now operating in the United States. Point Beach 1 and 2 achieved an exceptional level of safety and reliability through 35 years of operation and are still going strong. The lion’s share of the credit for this accomplishment goes to Sol, not only for his leadership but also for his technical mastery in dealing with the myriad complex issues involved in bringing this new technology to fruition.

In getting a job done, Sol loved finding ways for maximizing efficiency, reliability, time-to-delivery, and cost-effectiveness; it was generally a matter of balancing them. One example serves as an exemplar: At the end of every workday, Sol reviewed hundreds of pages of summaries of whatever work was in process. He would scrutinize expenditures and frequently call the engineer in charge to ask a question. In building the Valley Plant, a coal-fired unit in Milwaukee’s industrial center, Sol noticed a line item of $2,000 for a stainless steel flagpole. He called the engineer and asked what the alternatives were, and the engineer replied that a spun aluminum pole could be bought for $300, but that its design life was only 35 years, whereas the stainless steel version would last 100 years. Sol pointed out that the plant’s life was 40 years, and that the actual life was likely to be much longer than the quoted design life. Moreover, the item was non-critical and very easy to replace. WEP got the aluminum flagpole. He leaned back and said, “That’s how I justify my being here today. The goal is to get the engineer to spec the aluminum pole in the first place.”

All of this, of course, was interwoven with the human dimension. As an example, Sol was dedicated to affirmative action, though he despised most affirmative action programs; he believed that they were set up so that the participants

couldn’t fail and that this was a disservice to both the participants and to the company. At WEP, he plucked promising affirmative action participants out of the official program, and he installed them in make-or-break positions, e.g., head of a line crew. Sol reveled in their successes, and a number of them corresponded with him until he died.

In spite of his heavy responsibilities, Sol was an active participant in professional activities. He was elected a member of the American Society of Mechanical Engineers (ASME) in 1954 and a fellow in 1980. He was honored as Engineer of the Year by the Milwaukee Council of Engineering and Scientific Societies and was elected a fellow of the Wisconsin Academy of Sciences and Letters in 1986. He was honored nationally by his election to membership in the National Academy of Engineering in 1985; his primary membership was in Section 6, Electric Power/Energy Systems Engineering, and his secondary membership was in Section 10, Mechanical Engineering. His election citation reads: “For technical leadership in the design, construction, and highly successful operation of pioneering commercial nuclear electric generating plants.”

Over the years, Sol was engaged in many important studies. He served on the following National Academies Committees: Committee on Electrometallurgical Techniques for DOE Spent Fuel Treatment; Committee on Decontamination and Decommissioning; Committee on Technical Bases for Yucca Mountain Standards; and Committee on Separations Technology and Transmutation Systems. The reports emanating from these studies established the technical bases for government policies and the implementation of the storage, disposition, and management of radioactive wastes. Sol also participated in government advisory groups as a member of the Nuclear Research Advisory Committee of the Nuclear Regulatory Commission and advisory committees to the Federal Power Commission and the U.S. Department of Energy.

Sol also was affiliated with many industrial professional organizations. He was a member of the Board on Nuclear Codes and Standards of ASME; a member or chairman of

the utility advisory committees overseeing research and development (R&D) programs of the Electric Power Research Institute in nuclear power, exploratory research, strategic research, and seismic design; a member of the Policy Committee on Nuclear Regulation of the Atomic Industrial Forum; a member or chairman of the Edison Electric Institute advisory committees—Research, Prime Movers, Utility Nuclear Waste Management, and Executive Advisory Committee on Nuclear Power; and chairman of the Environment Committee of the Association for Edison Electric Illuminating Companies.

Sol worked closely with the Institute for Nuclear Power Operations (INPO), the self-regulatory utility group that monitors all U.S. plants for safety performance and compliance with high operating standards. He welcomed their peer reviews and volunteered his expertise in nuclear plant operational safety for dissemination among all nuclear utilities.

Sol was, above all, a leader, a person of unquestionable integrity, keen mind, and indefatigable work ethic. He had a gruff demeanor and always “told it like it was,” which might have been a bit frightening to young engineers on his team. But it didn’t take long for them to develop great respect for his openness and high standards. As a committee member, he never hesitated to express his opinions forthrightly, even when they were out of the mainstream. In the end, his ideas usually proved to be accurate. Behind his tough exterior, Sol

had a timely sense of humor. He understood human rhythms and how long or tense a session could become before nerves began to fray. During intense discussions on controversial technical issues, Sol would often break the tension with a quick joke. Sometimes he just told a joke that he liked, even without the tension. As a young engineer working on a power plant siting in Louisiana, most of the bayous on the map had been identified, many with the names of the families that lived there, for instance, the Jones Bayou or the Smith Bayou. One possible site had no name, and Sol had very carefully stenciled in the name “Howzit Bayou” in the same size/script as that of the map font. He could still recall 40 years later how he and the other S&W engineers could barely contain their laughter when the customer kept referring, in a deep Southern drawl, to the “Howzit Bayou” in their meeting.

Sol was always aware of his mission: to build safe, reliable power plants, to get power to the people, and to grind through all the details to their very end. He left no hanging threads, neither technical nor human.

Sol was devoted to his job, but after his retirement was finally able to find domestic bliss with his companion Joy Taylor and to spend time with his family: his son Paul and wife Dotty, and his daughter Nadine and her husband Jim Hubbell. He was crazy about his grandchildren, Rachel and Will, whom he tried to spoil; it was the one endeavor in which “Poppy” utterly failed, much to everyone’s (including Sol’s) delight.

Next: Melvin W. Carter »
Memorial Tributes: Volume 12 Get This Book
×