Get This Book
Visit NAP.edu/10766 to get more information about this book, to buy it in print, or to download it as a free PDF.
« Previous: John Wistar Simpson
Page 286 Share Cite
Suggested Citation:"Robert M. Sneider." National Academy of Engineering. 2008. Memorial Tributes: Volume 12. Washington, DC: The National Academies Press. doi: 10.17226/12473.
× 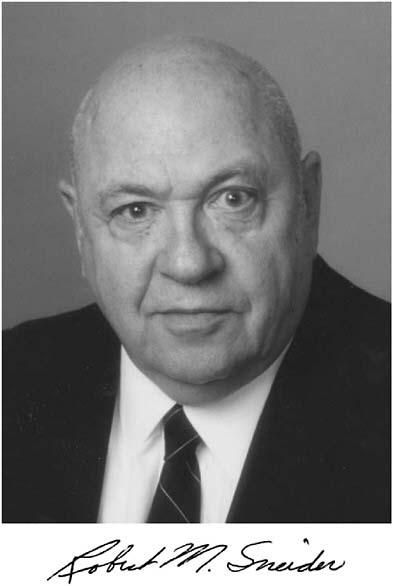 “For teaching and demonstrating the importance of synergistic geological, geophysical, and engineering efforts in the exploration and development of hydrocarbon accumulations.”

ROBERT M. SNEIDER, founder of Robert M. Sneider Exploration Inc., died in Houston on October 29, 2005, at the age of 76. Elected to the National Academy of Engineering (NAE) in 2000, he was in the middle of his third year as liaison member between the NAE Earth Resources Engineering Section and the National Research Council when he passed away.

Bob was born in Long Branch, New Jersey, on March 2, 1929; grew up in Asbury Park, New Jersey; and attended Rutgers University, where he received a B.S. in geology (with honors) in 1951. He served in Korea as a combat engineering officer in the U.S. Army Corps of Engineers until 1952. Following his military service, he entered graduate school at the University of Wisconsin and received his Ph.D. in geology and mining engineering in 1956.

Greatly influenced by his mentor Gus Archie, of Shell Oil, who shaped Bob’s career and the way he came to think about the subsurface, Bob joined Shell Oil in 1957. He spent the next 18 years, from 1957 to 1974, with Shell Oil or Shell Development Company, primarily as a reservoir geologist working on the application of well logs and reservoir geophysics to sandstone and carbonate reservoirs in the United States and Canada. He also trained geologists, geophysicists, and engineers to work together, the so-called “multidisciplinary team” approach, which reshaped how Shell, and eventually the entire industry, conducted business.

In 1974, Bob co-founded a small consulting firm, Sneider and Meckel Associates Inc., which assembled a technical team of geologists, a geophysicist, a log analyst, and a reservoir engineer. For the next seven years, they took on exciting and challenging projects, some of which resulted in the discovery of more than a dozen new fields, including Canadian Hunter’s huge Elmworth Field in the Alberta Basin, and significant redevelopment opportunities in older fields in the Anadarko Basin.

Bob was never one to shy away from forming a new group to accomplish tasks that required unusual combinations of talent. In 1981, he founded Robert M. Sneider Exploration Inc., a move that simultaneously opened new international areas and took him back to his roots, the detailed evaluation of the new potential of old fields. The new company acquired marginally producing properties and significantly increased production by improving reservoir recovery methods, using sound geologic principles, and calibrating well logs to rock types. He was also a partner and co-founder of Richardson, Sangree, and Sneider, a geosciences and engineering consulting group, and a partner and co-founder of PetroTech Associates, a company that specialized in the characterization of reservoir and seal rocks.

Bob pioneered the integration of information from geology, petrophysics, and engineering to solve geologic problems. Based on this approach, his organizations helped build two financially successful oil and gas companies—Canadian Hunter Exploration Limited and Greenhill Petroleum Company. He personally organized and led multidisciplinary teams that led to the discovery of several billion barrels of oil (equivalent) in new fields and in “hidden” reserves in existing fields throughout the world.

In addition, he sought, acquired, and rejuvenated 46 economically marginal fields in the United States in partnership with various companies. He recognized that these fields still had large reserves just waiting to be identified. Using his multidisciplinary approach, more than 600 million barrels of new reserves were acquired from these fields.

By nature, Bob was an outstanding teacher. He felt it was his responsibility to share his observations and insights with

others, and he did so with unbounded enthusiasm. He taught more than 20 different courses and trained several thousand professionals. He taught a wide range of subjects, including the exploration and development of sandstone and carbonate reservoirs; application of petrophysics in finding new reserves in dry holes and old fields; the value of integrating concepts and methods from geology, geophysics, petrophysics, and engineering; and methods of organizing and managing multidisciplinary teams.

Bob was active in several professional societies, especially the American Association of Petroleum Geologists (AAPG), for which he chaired several committees. He was also Distinguished Lecturer for the AAPG (1988), in Australia (1992), and the Middle East (1996), and ESSO Distinguished Lecturer for Australia (1997). On behalf of AAPG and three other societies, he convened the first annual Archie Conference on Reservoir Delineation, Description, and Management, an internationally recognized series that continues today. AAPG honored him with the Distinguished Service Award (1991), named him Honorary Member (1994), and granted him its highest honor, the Sidney Powers Memorial Award (2001), in recognition of his outstanding contributions to and achievements in petroleum geology.

A man of integrity, Bob always knew exactly where he stood on an issue and why. His recommendations were logical, practical, and valued, although they were not always what his listeners wanted to hear. He served on the advisory boards of AAPG, the Colorado School of Mines Department of Geology, University of Wisconsin Department of Geology and Geophysics, and Strike Oil and Strike Energy Ltd. of Australia. He was a trustee associate of the AAPG Foundation and was instrumental in establishing the Gustavus E. Archie Memorial Grant and Gustavus E. Archie Memorial International Grant, which, together, provide four grants a year to graduate students in petrophysics and development geology.

Although Bob’s parents weren’t thrilled initially about his passion for geology (they didn’t know what a geologist was or how on earth he could make a living), when Bob’s career took

off, they decided it was okay. Bob loved being out in the field, whether he was studying modern depositional processes or outcrops. When most kids and their families went to the beach, the Sneiders went on field trips to study coastal processes. Annual vacations, especially through the mountains of California, Colorado, Wyoming, and the Canadian Rockies, were occasions to take pictures of outcrops and explain the geology, whether or not anyone was listening.

Bob eagerly and generously gave of his time and money, especially to further the development of young professionals and students. Having received financial aid in his youth that enabled him to go to college, he became a mentor for literally hundreds of people. His true strength was the way he shared his knowledge and experience. He treated everyone with respect, from top executives to trainees.

One of those whom Bob mentored said this upon his death: “This is the passing of the greatest mentor that I have ever had in the field of geology. Bob’s talents are known worldwide, and on top of his science skill set, he was a true gentleman. He will be missed by many. He once wrote about his own mentor, Gus Archie, ‘the mediocre mentor tells, the good mentor teaches, the superior mentor demonstrates, and the great mentor INSPIRES!’ Bob was inspirational.” Those of us who experienced the breadth and keenness of his knowledge of petroleum geology were indeed fortunate. He was the preeminent, complete subsurface geologist.

Next: Vivian T. Stannett »
Memorial Tributes: Volume 12 Get This Book
×