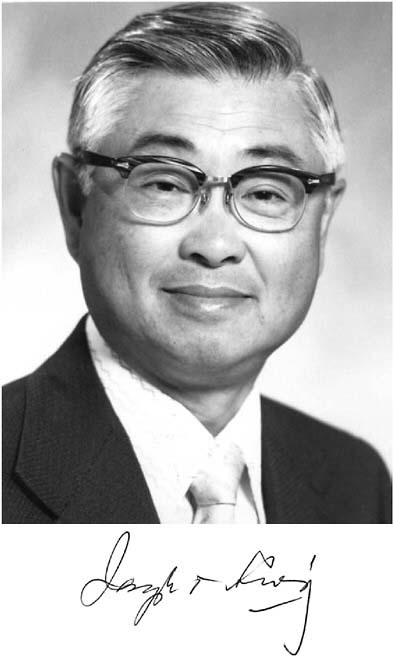 “For leadership in environmental engineering, specifically in pollution control of air and water.”

BY RICHARD A. CONWAY AND LOUIS J. LING

JOSEPH T. LING, a visionary pioneer of pollution prevention and an advocate of sustainable development and growth, died on February 22, 2006, in Minneapolis, Minnesota, at the age of 86. During his 32-year career in engineering, he had a profound influence worldwide on the direction of environmental policy, philosophy, and industrial environmental practices, as well as on government regulation and legislation.

Joe retired in 1984 as vice president, Environmental Engineering and Pollution Control, 3M Company, but continued for another two decades as an advisor and a supporter of myriad academic, industrial, regulatory, and legislative organizations. He was known around the world for his foresight, innovative approaches, and effective implementation of advanced environmental technologies and policies.

Joe was born June 10, 1919, in Beijing, China, into a family with a tradition of public service. At the age of 18, Joe found himself head of the family in Nanking, after his father died and his older brother accompanied the government to Chungking. The Lings survived the bombing and brutal Nanking massacre in November 1937 by hiding in the countryside. Two years later, American Methodist missionaries, Marie Brethorst and Albert Stewart, helped Joe attend Hangchow Christian University in the international sector of Shanghai.

Although schooling became difficult when the Japanese occupied Shanghai on December 7, 1941, Joe still managed to complete his engineering studies in 1943, after only three-and-one-half years. A year later, he married Rose Hsu, a classmate majoring in chemical engineering, who became his lifelong partner. Joe was a district engineer for the Nanking-Shanghai Railroad System from 1944 to 1947. In 1948, he left China to study at the University of Minnesota, where he received the university’s first doctorate in sanitary engineering in 1952. In the early 1950s, during the Korean War, the U.S. government refused to allow Chinese nationals with technical expertise to return to China, so Joe joined his wife, a research scientist, at General Mills. Finally, in 1956, the family returned to China, where Joe founded and directed the National Institute of Sanitary Engineering Research in Beijing.

Although the Lings were well treated, they were frustrated by Chinese politics of the era, so they devised an exit plan that got the family out of China to Hong Kong in 1958, where Joe became professor of civil engineering at Baptist University. In 1959, the family moved to the United States, and, in 1960, Joe became 3M’s first professionally trained environmental engineer and head of the company’s Water and Sanitary Engineering Department. He became a proud citizen of the United States in 1963.

In 1975, Joe established a formal environmental policy for 3M, specifying that 3M would solve its own environmental problems, observe government regulations, and assist the government with environmental regulatory matters. With this policy, 3M moved beyond waste treatment into pollution prevention, natural resources conservation, and a policy of developing products with minimal or no adverse effects on the environment. The policy was based on the idea that pollutants are natural resources that can be reclaimed—and, at the same time, improve operational efficiency through higher production yield.

A highlight of Joe’s career at 3M was the Pollution Prevention Pays (3P) Program, established in 1975, which is still a worldwide standard. The 3P Program recognized and rewarded 3M

scientists, engineers, and technicians who found ways to eliminate or reduce pollution from products and laboratory or manufacturing processes. The “pays” component of the program—measured in dollar savings—provided essential motivation. After 30 years, the 3P Program is still a key strategy in 3M’s Environmental Management Plan. From 1975 to 2005, with some 8,500 pollution prevention activities and programs in 23 countries, the company was able to keep from producing an estimated 2.2 billion pounds of pollutants while saving nearly $1 billion.

Joe realized that government and public awareness was essential to regulatory and legislative acceptance of this new approach, so he “went public” with the idea in 1976. The Economic Commission for Europe held a conference on pollution prevention in Paris that same year, and soon thereafter the United Kingdom, France, Germany, and other countries adopted pollution prevention as an integral part of their national environmental policies.

Throughout his life, Joe addressed audiences around the world about the role of pollution prevention in “a conserver society … that sustains the environment and natural resources, while permitting progress that allows developed nations to maintain a high standard of living and less-developed nations to improve their lifestyles.” He stressed the need for cooperation

among industry, government, academia, and the general public, because “the environmental issue is emotional … the decision is political … but the solution must be technical.” His ideas and aspirations encompassed the world, and he called on all “nations of the world to provide for future generations through the achievement of sustainable patterns of production and consumption.”

Joe was an advisor to numerous academic, industrial, and governmental organizations worldwide—including the United Nations Environment Program, the Organization for Economic Cooperation and Development, the National Academy of Engineering (NAE), EPA, and the U.S. Chamber of Commerce. He published an impressive number of technical papers, including an influential monograph, Low- and Non-Pollution Technology Through Pollution Prevention, prepared with the United Nations Environment Program and circulated worldwide.

In 1974, President Nixon appointed Joe to the President’s Air Quality Advisory Board. In 1978, President Carter named him to the Domestic Policy Review of Environmental Policy and Industrial Innovation, and, in 1988, President George H.W. Bush named him to the Jury Committee of the President’s Environment and Resources Conservation Award. Joe was elected to NAE in 1976 and was a senior fellow of the Woodrow Wilson National Fellowship Foundation, a diplomate of the American Academy of Environmental Engineers, and a life fellow of the American Society of Civil Engineers.

On June 23, 2005, Joe was awarded the International Air and Waste Management Association Richard Beatty Mellon Environmental Stewardship Award. Among his other awards were induction into the United Nations Global 500 Honor Roll; the first Gold Medal Award of the World Environment Center; and the Queneau Palladium Medal of the National Audubon Society and American Association of Engineering Societies.

A long-time supporter of the University of Minnesota, Joe and his wife, Rose, established the Rose S. and Joseph T. Ling Graduate Fellowship in Environmental Engineering and the Joseph T. and Rose S. Ling Professorship in Civil Engineering.

In 1999, Engineering News Record selected Joe one of the 125 most significant people of the previous 125 years; all of the individuals on the list were honored for “pioneering, often in uncharted territory, [and] developing new analytical tools, equipment, engineering or architectural designs. Their efforts, singularly and collectively, helped shape this nation and the world.” Joe was honored for developing “the total environmental concept, aiming to reduce wastes in the manufacturing process itself.”

Joe and Rose raised three daughters born in China and a son born in Minnesota to value education and service. Two became teachers, and two are physicians. He traveled for business and pleasure and enjoyed talking to people all over the world. His hobbies included fishing, walking, eating Chinese food, and giving advice. .

Joe is survived by his wife, Rose, and his children, Lois Olson, Rosa Ahlgren, Lorraine Laroy, and Louis Ling and 12 grandchildren, Susan and Sandra Olson; Micah, Aric, Theresa, and Jason Ahlgren; Jennifer, John, and Caroline Laroy; and Eric, Alison, and Amanda Ling. One of the grandchildren has followed in his footsteps to become an environmental engineer. He is also survived by six great-grandchildren

With his vision, tenacity, and diplomacy, Dr. Joseph T. Ling was an irresistible force that moved many an immovable object as he strove for fundamental changes in environmental approaches—from pollution control to pollution prevention to sustainable development and growth. His effect on the environment can best be measured by how many others worldwide have followed in his footsteps.

Although short in stature, Joe was a giant who argued tirelessly and compellingly, in his quiet way, for groundbreaking concepts. Colleagues in the National Academies and elsewhere looked to him as a friend and mentor, and he will be greatly missed.

Next: Ralph A. Logan »
Memorial Tributes: Volume 12 Get This Book
×