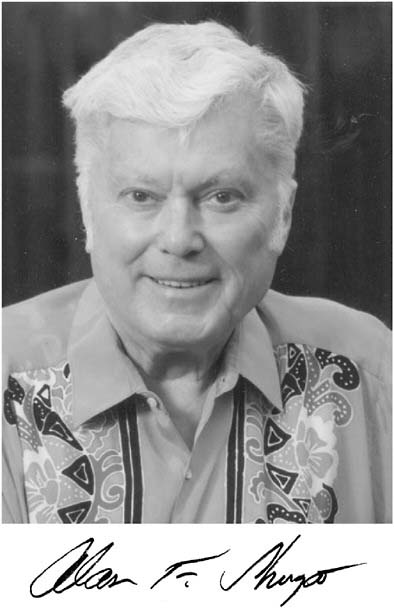 “For contributions to disc memory devices and interfaces for personal computers.”

ALAN F. SHUGART, pioneer of the multibillion-dollar computer hard-drive industry and co-founder of Seagate Technology, died December 12, 2006, at the age of 76, of complications from heart surgery six weeks earlier. Shugart was one of the most influential and admired figures in the industry.

After graduating from the University of Redlands in 1951 with a degree in engineering physics, Al began his career at IBM, where he worked on RAMAC, the world’s first disk drive, which could store 5 million characters of data, weighed a ton, and took more than a second to access stored data. He continued at IBM for 18 years, working on or leading many significant disk-drive development programs, including the groundbreaking 1311 removable disk-pack drive. By the time he left the company, in 1969, he was director of engineering.

From 1969 to 1972, Al was vice president of product development at Memorex, which became IBM’s primary competitor in drive sales. When he left Memorex, he launched Shugart Associates with several loyal followers. The company designed a smaller-diameter floppy-disk drive that was used in the 1979 Apple II, which became the first mass-market PC thanks largely to Al’s floppy disk, which eliminated the laborious chore of reentering data and programs every time the computer was turned on.

In 1979, Al and Finis Conner founded Seagate Technology, which designed and manufactured the first hard-disk drive for the personal-computer market. Al realized that “open-source” technology was essential for the PC hard-drive business to grow quickly into a mass market and that Seagate would have many more customers if they could buy hard drives from other companies as well. Betting that he could make better products at lower prices, he pioneered today’s standardized, open specifications for computer disk drives. Al made Seagate’s disk drive electronic and mechanical specifications publicly available and freely usable by his competitors.

Seagate’s first commercial product was a 5.25-inch, 5-megabyte hard-disk drive that became a major enabling technology for the PC industry. The company’s success was driven by Al’s culture of honesty and open information. Al, who was honest to a fault, ran his companies by his own strict ethical standards. He once said, “I decided that I couldn’t lie about anything, even though lying would make things better.” His ethics had the virtue of being very simple and perfectly clear to his employees. In an ambiguous situation, they only had to ask themselves, “What would Al say?”

He led Seagate into the design and manufacture of its own critical drive components, becoming the first high-volume manufacturer of thin-film cobalt recording disks. In 1989, Seagate acquired Imprimis Technology in Minneapolis from the Control Data computer company, giving Seagate research and manufacturing capability for recording heads and high-end drives. He diversified Seagate into different aspects of the data-storage business, including data backup and removable flash memory. Seagate ultimately spun off the data backup component as Veritas.

Under Al’s leadership, Seagate became the world’s largest producer of disk drives, and it remains so today. He insisted that all company employees worldwide share in the company’s success. He was a staunch believer in stock options in high-tech start-up companies to ensure fairness to employees. Thus all Seagate employees received stock options. Al also founded

As the data-storage industry matured, Al foresaw that research would become increasingly critical. He was a founder of the Center for Magnetic Recording Research at the University of California at San Diego and a major research and education center at Carnegie Mellon University in Pittsburgh.

He left Seagate in July 1998 to run his own company, Al Shugart International, an incubator for start-up companies.

In his long career, Al won many awards. He was elected a member of the National Academy of Engineering in 1997. Also in 1997, IEEE honored him with the Rey Johnson Award for the advancement of information storage technology. In 2005, he became a fellow of IEEE for his lifelong contributions to the disk-drive industry. In 2005, he was also made a fellow of the Computer History Museum. Al was a popular speaker at storage-industry conferences. He received the CEO of the Year Award from Financial World Magazine and was Data Storage’s Most Admired Executive from 1993 to 1997.

Al was an outstanding leader who inspired great loyalty in his team members. When asked about his leadership model, he often said, “I find a parade, and get in front of it!” Al didn’t invent disk-drive technology—neither RAMAC nor the first floppy drive nor the first hard drive for personal computers. Al made high-performance, low-cost drives available to the world. Early drives had been built a few at a time, like airliners. Al built them by the millions.

Next: John Wistar Simpson »
Memorial Tributes: Volume 12 Get This Book
×