Get This Book
Visit NAP.edu/10766 to get more information about this book, to buy it in print, or to download it as a free PDF.
« Previous: Howard C. Barnes
Page 40 Share Cite
Suggested Citation:"Robert R. Berg." National Academy of Engineering. 2008. Memorial Tributes: Volume 12. Washington, DC: The National Academies Press. doi: 10.17226/12473.
× 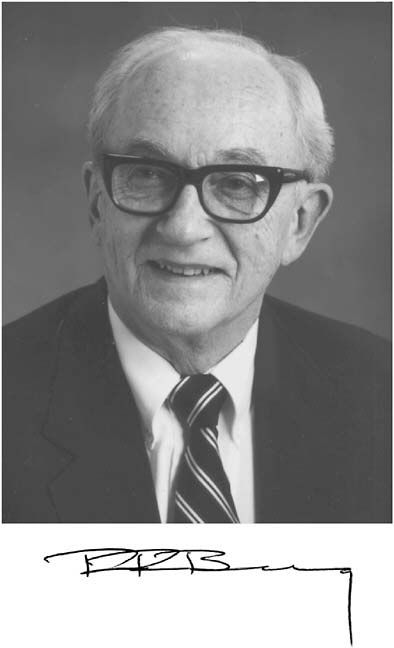 “For outstanding contributions concerning the migration, accumulation, and production of oil through the development of concepts to quantify reservoir depositional systems.”

ROBERT RAYMOND BERG, professor of geology at Texas A&M University, died peacefully on June 13, 2006, at the age of 82, after a rich and harmonious life. Bob’s 42-year professional life can be divided into two parts. From 1951 to 1967, he was an exploration geologist and geophysicist for various oil and gas companies, including the Embar Oil Company, a consulting company he founded. From 1967 to 1995, he was an educator, scientist, and academic administrator at Texas A&M. For me the second part of his professional life is more fascinating, perhaps because he contributed to my own education during that time.

Bob made abundant contributions to the body of geological knowledge, especially in the area of sedimentology. His studies were focused on the origins and characterization of sandstone reservoirs, from which more than 50 percent of the world’s petroleum is produced. One of Bob’s most significant contributions was the turbidite exploration model, which proved the existence of sandstone reservoirs in basinal systems that were thought to be “sand poor.” This model was important for oil and gas exploration, especially for deepwater reservoirs in the Gulf of Mexico and West Africa, two key focus areas today.

During those same years, Bob found the time and energy to head the Geology Department at Texas A&M. He later became director of the Office of University Research and supervised 112 graduate students, many of whom are now industry leaders.

Bob was elected to the National Academy of Engineering in 1988, the first member of the geology and geophysics faculty at Texas A&M to receive such an honor. He served a term as president of the Rocky Mountain Association of Geologists (1966) and president of the American Institute of Professional Geologists (1971), and he was an honorary member of the American Association of Petroleum Geologists (AAPG), American Institute of Professional Geologists (AIPG), and Gulf Coast Association of Geological Societies. In 1981, he was awarded the AIPG Ben H. Parker Medal for outstanding service to the profession, and in 1992 he received the Outstanding Achievement Award from his alma mater, the University of Minnesota. In 1993, he received the AAPG Sidney Powers Memorial Award for outstanding contributions to petroleum geology. He also received many teaching and research awards.

Bob began his professional career with the California Company (now Chevron), supervising exploration in both structural and stratigraphic plays in the Rocky Mountains area. In 1959, he formed Embar Oil Company in Denver, Colorado, which was not only a consulting company, but also generated prospects for oil companies. In 1967, Bob was hired by Texas A&M, which was looking for an enthusiastic scholar with experience in the oil and gas industry to head its Department of Geology. The resulting relationship proved to be extremely beneficial for both parties. From 1967 to 1972, Bob guided the research of 112 graduate students and published more than 70 papers and a popular textbook, Reservoir Sandstones

(Prentice-Hall Inc., 1986), based on his own research. He created an academic environment in which many other scientists flourished.

In 1972, he was appointed the first director of the Texas A&M Office of University Research, where his responsibilities included managing funds for research and monitoring all research activities at the university. During his 10 years in that office, total research expenditures at the university increased from $26 million to $90 million per year. Nevertheless, Bob continued to carry a full-time teaching load, advise graduate students, and conduct his own research. In 1982, Bob was awarded the Michel T. Halbouty Chair in Geology. In 2000, at a symposium in his honor, his former students presented papers based on insights based on the studies of their beloved professor. Following the symposium, the Robert R. Berg Professorship was created. By the time I joined Texas A&M in 1997, Bob had officially retired, but as professor emeritus he continued to teach and supervise students until the summer of 2005, when he was forced to stop for health reasons.

Bob Berg was a devoted father and avid fly fisherman and sportsman. With three sons, many family activities were centered upon camping when the family lived in Denver. Geology was always on his mind, though, and every outing and road trip was also a geological field trip. It is not surprising that two of his sons became geologists. Bob was a Boy Scout when he was young, and he continued in the scouting tradition as an adult scout leader for his sons’ scout troop. Upon moving to Texas, Bob joined a goose-hunting lease near Columbus, Texas, and he and his sons spent many hours calling in the geese while lying in water-logged rice fields.

In addition to fly fishing, Bob was very athletic in his younger days and was an expert alpine skier. As many graduate students and faculty colleagues can attest, Bob was an avid racquetball player and a fierce competitor. He was also interested in music and had very eclectic musical tastes, but his favorite music was traditional Dixieland jazz. He was also an accomplished harmonica and ukulele player.

Bob and his wife, Jo, loved to travel. They spent many skiing

vacations in Aspen, Colorado, and Jackson, Wyoming. When they could no longer ski, they made annual treks to vacation in Aspen during the summer to enjoy fly fishing and music festival concerts. They also made two trips to Scandinavia where they researched Bob’s family history; his grandfather had emigrated from Sweden in the late 19th century. Fascinated with genealogy, he researched both his and Jo’s family histories, and his research provided valuable information to his children and grandchildren.

Bob led a very challenging but satisfying life characterized by his compassion and his devotion to excellence. He was the quintessential scientist and scholar. His influence as an educator will live on in the lives and careers of his students, and he will be remembered with respect and admiration by all of his contemporaries and colleagues.

James Robert Berg, a son, preceded Bob in death. Dr. Berg’s survivors include his wife, Jo, of Bryan, Texas, whom he met at Central High School in St. Paul, Minnesota. They were together in marriage for almost 60 years. Bob is survived by two sons: Charles, and wife Sarah, of The Woodlands, Texas, and William, and wife Theresa, of Fort Collins, Colorado, and three grandchildren, Matthew, Amanda, and Camille. Charles, a geophysicist, and William, a petroleum geologist, are fortunate to have inherited their father’s love of geology and learning. Bob was devoted to his grandchildren, and they benefited greatly from his presence in their lives.

Next: Frederick Stucky Billig »
Memorial Tributes: Volume 12 Get This Book
×