Get This Book
Visit NAP.edu/10766 to get more information about this book, to buy it in print, or to download it as a free PDF.
« Previous: Reuben Samuels
Page 252 Share Cite
Suggested Citation:"Dudley A. Saville." National Academy of Engineering. 2008. Memorial Tributes: Volume 12. Washington, DC: The National Academies Press. doi: 10.17226/12473.
× 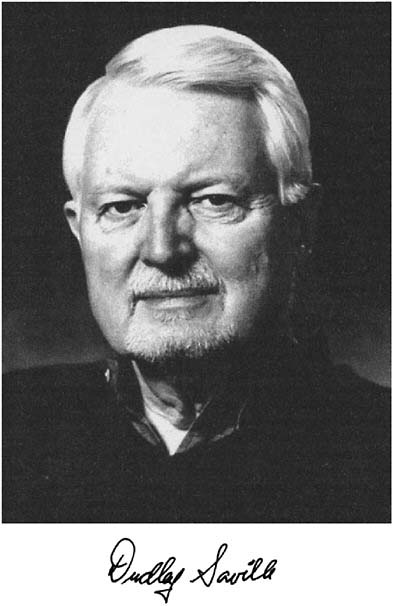 “For advancing our understanding of electrokinetic and electrohydrodynamic processes and their application to the assembly of colloidal arrays.”

DUDLEY ALBERT SAVILLE, the Stephen C. Macaleer ’63 Professor in Engineering and Applied Science and professor of chemical engineering at Princeton University, died on Wednesday, October 4, 2006. In the course of a distinguished 40-year career, Saville established himself as an internationally renowned authority in fluid mechanics and colloid science.

Saville was born in Lincoln, Nebraska, on February 25, 1933. After a precocious childhood, he attended the University of Nebraska and obtained a B.S. in chemical engineering in 1954. Following brief employment with the Union Carbide Corporation as a development engineer, he joined the Air Force as a commissioned 2nd lieutenant in March 1955. He learned to fly T33, T34, T28, and C-47 airplanes at Marana Air Force Base in Tucson, Arizona, and from October 1956 to September 1957, he was a controller at the 314th Air Division at Osan-Ni K-55 Air Base, Korea, and a T33 pilot.

While in Korea, Saville took extension courses in advanced mathematics and tutored several fellow airmen; he served as a radar-intercept instructor at Tyndall Air Force Base, Florida, through January 1958. By the end of his three-year service in the Air Force, he had logged 500 flying hours and had been promoted to the rank of captain. Service in the Air Force was a formative experience that reinforced his self-confidence, and he remained a glider enthusiast for much of his life.

In 1958, Saville enrolled as a graduate student at the University of Nebraska, where he received a master’s degree in 1959. He then worked in industrial research at Chevron Oil Company in Richmond, California, from 1959 to 1961, when he entered the University of Michigan, where he studied with Stuart W. Churchill and obtained his Ph.D. in chemical engineering in 1966. His thesis was an analytical and numerical investigation of laminar-free convection in boundary layers near axisymmetric bodies. The journal articles based upon this work stand today as the definitive benchmark of the subject. Upon completion of his Ph.D., he joined an exceptional group of chemical engineering researchers at Shell Development Company in Emeryville, California, where he was strongly influenced by the quality and originality of research by Charles Sternling on mass transfer across interfaces.

In 1968, Saville joined the Department of Chemical Engineering at Princeton. In his letter of application for the position, he wrote prophetically: “If I were to choose one area of interest, it would be electrohydrodynamics.” At the time of his death, he was one of the world’s most distinguished scholars in that field.

Saville was promoted to associate professor in 1971 and to full professor in 1977. From the very beginning, his interests were centered on the dynamics of electrically conducting fluids. Suspensions of nanometer-to-micron-sized particles in fluids, or colloidal suspensions, also attracted his scientific curiosity. Over the years, his research came to define a vast intellectual territory involving the behavior of colloidal suspensions in the presence of electric fields.

The practical applications of Saville’s research ranged from protein crystallization to electrohydrodynamic printing, and from the behavior of fluids in microgravity to enhanced oil recovery. With both theoretical and experimental components, his research was invariably characterized by formal elegance and deep insights. Among his most notable accomplishments were the invention of dielectric spectroscopy for the measurement of the surface charge of colloidal particles and the development of the Dynamic Stern Layer model for the interpretation of

electrokinetic measurements. In his 38 years at Princeton, he supervised 25 Ph.D. students and 14 postdoctoral fellows.

In 1992, Saville began a fruitful collaboration with Ilhan Aksay, a Princeton colleague who had complementary skills and expertise. Their exploration of using electrohydrodynamics to assemble and pattern colloidal crystals and other submicron phases resulted in a number of influential papers published in Science, Nature, and Physical Review Letters on the assembly of colloidal particles, surfactant aggregates, and proteins on surfaces. Theirs was a model scientific collaboration, the results of which were far more important than if the two had worked separately and combined their results.

Saville’s research is documented in more than 110 journal articles. With his Princeton colleagues William Russel and William Schowalter, he coauthored the 1989 textbook Colloidal Dispersions. In 1992, he coauthored Dynamics of Electrophoresis with R.A. Mosher and W. Thormann. Both books are now standards in their respective fields.

In the mid-1970s, as scientific advisor to NASA’s Microgravity Sciences Program, Saville was asked to evaluate the role of buoyancy-driven convection in electrophoresis as a possible means of improving the separation of cells and proteins in microgravity. The resulting report, Fluid Mechanics of Continuous Flow Electrophoresis, coauthored with Simon Ostrach, was the first attempt to provide a rational framework for assessing the advantages of electrophoretic separations in microgravity.

Subsequently, as a member of the Advisory Committee on Space Science in the Twenty-First Century, he helped to define and implement goals for NASA’s Microgravity Sciences Program. His insights were instrumental in dispelling skepticism in the fluid-mechanics community about the objectives and scientific merit of microgravity research.

Saville’s involvement with NASA culminated in 1996, when his ALEX liquid-bridges experiment was included in the Life and Microgravity Spacelab mission launched on the shuttle Columbia. This experiment tested the predictions of G.I. Taylor’s “leaky dielectric” theory on the behavior of fluids under the influence of electric fields.

Saville’s preference as a teacher was for foundational, or core, courses, although he also initiated advanced graduate courses in hydrodynamic stability and colloidal dispersions. Whether teaching undergraduate thermodynamics, graduate fluid mechanics, or graduate transport phenomena, his classes were invariably characterized by mathematical rigor, clarity of exposition, and an emphasis on fundamentals. A demanding instructor, he earned the respect of generations of chemical engineering students, many of whom recall his Socratic approach to teaching in advanced courses.

Saville was revered by colleagues for his integrity and his generosity. His economy of thought and expression was legendary, but so was his thoughtfulness. When he spoke, he stripped his arguments of all but the essentials, and, over the years, he offered invaluable insight, advice, and intellectual leadership. He exerted a profound influence on the programs and intellectual environment of Princeton’s chemical engineering department and did much to maintain and enhance its reputation as one of the premier chemical engineering departments in the country.

No account of Dudley Saville’s career can be complete without mentioning his understated, self-effacing manner. Shyness, a strong sense of decorum, and a deep inner confidence in the value of his work combined happily to erase all traces of self-promotion or aggrandizement in his professional demeanor.

Saville is survived by Joy, his wife of 47 years; son and daughter-in-law Dudley Alexander (b. 4/25/64) and Amy Jacob of Highland Park, New Jersey; daughter and son-in-law Andrea (b. 4/14/67) and Stephen White of Princeton, New

His wife Joy, son,Alex, and daughter Andrea wrote that Dudley brought elegance, grace, and a sense of humor to his personal relationships. His appreciation for nature made camping with his young family an exciting and memorable way to see the world. Later in life, he and his wife, Joy, transformed a backyard of brush and trees into a lush garden of perennials surrounding a large fish pond and a bluestone patio built by their son, Alex. His love of flying and Air Force experience translated into 10 years of flying gliders with the Soaring Society of Princeton University. A sport he reluctantly gave up when his increasingly busy schedule did not allow him to fly often enough to meet his safety standards. His impeccably high standards permeated his entire being, but at the same time, his intelligence and compassion filled intimate relationships with love and warmth. For many years he kept fit playing squash, and enjoyed routinely trouncing younger faculty members and students. “If I can’t outrun or out-hit them, I outsmart them,” he commented to Alex, who was never able to beat him, and who quit trying about the same time Dudley retired from the courts.

In the mid-1970s, he learned to sail, an activity he enjoyed whether it was sailing his Sunfish on Lake Carnegie in Princeton, plying the waters of the Sheepscot River in Maine, exploring the estuaries of the Chesapeake Bay, or crewing for a friend on a boat in transit between Bermuda and Connecticut. He was fond of quoting Kenneth Grahame from The Wind in the Willows: “There is nothing—absolutely nothing—half so much worth doing as simply messing about in boats.” Though he agreed with Grahame wholeheartedly, the quote may actually be more indicative of his undoubtedly favorite pastime, reading. Like most academics, he had an insatiable thirst for knowledge,

one that was not quenched by his daytime research alone. His nightstand always had several books neatly stacked on it, and if you were lucky enough to see it, you would find the latest issue of the New York Review of Books, a classic text on differential equations, a political best seller, and a novel someone had recommended. Toward the end of his life when he knew his time was likely short, he reread his favorite Hemingway novels and commented with typical dryness that they were better than he remembered.

With most activities in his life, he saw connections to his research and work. His love of boats had as much to do with recreation as it did with his lifelong interest in the behavior of water; he saw and tried to understand the functioning of the natural world around him at every turn. His grandson, Aidan, had barely begun to talk when Dudley began explaining vortices in the bathtub and demonstrating the wonders of surface tension in soap bubbles. And the connections from his life to his work flowed the other direction as well. His daughter, Andrea, remembers when she was learning to read scientific equations in high school how he had her help proofread his papers, an activity that not only put her ahead of her classmates but also gave her a window of understanding into his work.

Very few subjects were of no interest to Dudley, and unexplained and unanswered questions interested him the most. His membership and participation at Nassau Presbyterian Church in Princeton provided him with a place to worship and express his faith in God. Dudley enriched the lives of his family, friends, and colleagues. His life was an example of how to live within, as well as bring together the communities of family, work, and religion. Indeed, he celebrated the wonders of this world each day of his life with everyone in his life. In the end, it was this interconnectivity of all things that fascinated him above all and drove him to examine the details in order to better see the whole.

Next: Milton Clayton Shaw »
Memorial Tributes: Volume 12 Get This Book
×