Get This Book
Visit NAP.edu/10766 to get more information about this book, to buy it in print, or to download it as a free PDF.
« Previous: Morris Cohen
Page 92 Share Cite
Suggested Citation:"Ralph Cross." National Academy of Engineering. 2008. Memorial Tributes: Volume 12. Washington, DC: The National Academies Press. doi: 10.17226/12473.
× 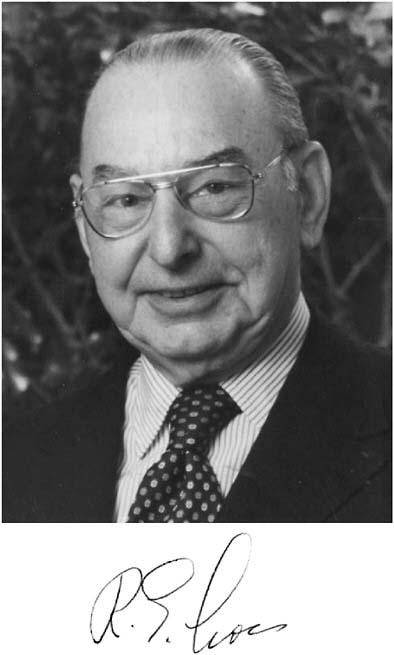 “For development and application of automation principles as related to machine tools and manufacturing processes.”

RALPH E. CROSS, a pioneer in the field of manufacturing engineering and father of automation, died peacefully in his home in Grosse Pointe, Michigan, on Thursday, June 26. He was 93. He was a resident of Boynton Beach, Florida, and Grosse Pointe.

Ralph Cross was born in 1910 in Detroit, Michigan where the Cross family had settled in the mid-1800s. His father, Milton Osgood Cross Sr., known as the Skipper for his love of boats, had started a small machine shop in Detroit in 1898, taking in his father, Charles, a cabinetmaker by trade, as partner. The company, Milton O. Cross & Co. Brass Goods, manufactured a variety of metal products, primarily brass goods and marine hardware. As the years passed and the company added to its product line, the Skipper’s love for boats influenced his decision to start offering marine engines. In this early period of automotive history the company soon became established in the fields of marine and stationery engines. It also became known for its expertise in the making of gears. By 1910, the year Ralph was born, the company was building engines, transmissions,

and axels for automobiles. Like many others in Detroit in that period, the Skipper built his own car, powered by a Cross marine engine.

Ralph E. Cross grew up in a manufacturing family. He spent much of his youth, together with his brother, Milton O. Cross Jr., in the shop helping his father, operating the various metal-shaping machines, and designing and making metal parts. Here he developed his lifelong interest in manufacturing processes, which he was later to transform forever.

He attended public school in Detroit where he was a top student. In 1928, he entered Chauncy Hall in Boston to pursue a one-year course of study to better prepare him for the Massachusetts Institute of Technology where he had been accepted. At MIT he studied manufacturing engineering and began to develop the concepts of automating machining processes, later to be known as “automation.”

A Pioneer in the Development of Automation

With the onset of the Great Depression, the family’s business prospects turned bleak. Following his graduation from MIT in 1933, he returned to Detroit to rejoin the family business, which had been renamed Cross Gear and Machine. In 1932, the Skipper turned the business over to the two brothers. Milton was the president and in charge of sales, while Ralph headed up manufacturing and engineering. The two brothers then decided to drop all products except machines, thus pointing the company in the direction that would ultimately make it the largest machine tool company in the United States.

In 1932, Ralph married his childhood sweetheart, Eloise Fountain of Detroit. In 1934 their first child, Ralph Emerson Cross Jr., was born.

As the economy began to recover in 1937 the company began to expand its machine tool product base by offering “special” nonstandardized machines that solved each customer’s problem in the most efficient way. When World War II started, the company redirected its efforts to the manufacture of special machines for the country’s war efforts, machines that would produce armaments, tanks, airplane parts, and other military

equipment. During the war the company thrived, as its products were essential to the country’s ability to produce war-related equipment.

In 1946, following World War II, as industry converted from wartime to peacetime products, the demand for special machine tools rose rapidly and fostered an era of unprecedented innovation in manufacturing methods and machines. This postwar period gave many companies the opportunity to replace previously scrapped or obsolete machines with new ones employing the latest technological advances. It was the period that gave birth to what eventually became known as “Detroit Automation,” the in-line sequencing of manufacturing operations utilizing automatic material handling techniques. Automation transformed American industry, particularly the automobile industry, by making it possible to employ semiskilled workers in place of skilled machinists to perform sequences of differing machining operations on the same platform, to higher tolerances and at higher speeds than were heretofore possible. The Cross Company, as it had been renamed, emerged during this postwar period as the most technologically advanced and innovative company in the machine tool industry. In the years that followed, it pioneered in the development of the transfer machine, preset tools, tool control systems, sectionalized transfer lines, ballscrew feed units, and computerized machine tool systems. Behind all of these developments, both at the company and in the industry, was Ralph Cross, who was able to put into practice the concepts of automation he had developed while at MIT and thereafter. He was in many ways the father of automation and was to metalworking what Henry Ford was to the production line.

The Cross Company continued to prosper and expand throughout the postwar period. Following the path of the auto industry, the company began its expansion into overseas markets with the establishment in 1960 of Cross International AG, in Fribourg, Switzerland, for the purpose of marketing Cross machines on a worldwide scale. The company also

In the early 1960s the company recognized the dramatic gains in productivity that could be realized by being able to intermix metalworking, assembly, and testing operations into more compact and efficient arrangements. It set out to become builders of integrated manufacturing systems. It developed the first integrated manufacturing system for machining, assembling, and testing transmission stator support assemblies; the industry’s first nonsynchronous transfer machine for assembling and testing disc brake assemblies; and the industry’s first automated “Cold State” engine diagnostic and test system.

In all of these developments the Cross Company was the clear industry leader, often introducing product innovations that became industry standards and expanding into markets years ahead of its competitors. It was Ralph Cross who was a guiding force behind these advances.

In 1967, upon the untimely death of his brother, Milton, Ralph was named Cross company chairman of the board, president, and CEO. He served in those positions until 1979 when he left to engineer the formation of Cross & Trecker Corporation, a holding company for the combination of the Cross Company and Kearney & Trecker, a Wisconsin machine toolmaker. At its formation, he acceded to the position of chairman emeritus of Cross & Trecker and remained until his final retirement in 1986.

During the 1960s and until his retirement from the industry in 1984, Ralph Cross was recognized as one of the leading

experts in manufacturing engineering with unique experience in international trade. In that capacity he served in many honorary and advisory capacities and received many honors in recognition of his leading role in the machinery industry. Among his many accomplishments were:

Ralph Cross was an active philanthropist, supporting in particular MIT, where he established the Ralph E. Cross and Eloise F. Cross Professorship in Mechanical Engineering. He also established the Cross Lectureship in Manufacturing at MIT, sponsoring lecturers that cover all fields of manufacturing. When, with his financial backing, the Laboratory for Manufacturing and Productivity was formed at MIT in 1977, he became the first chairman of the Industrial Development Board.

He also contributed generously to the Ralph Cross Endowment Fund of the Society of Manufacturing Engineers Education Foundation, which makes grants to students in manufacturing education.

One of Cross’s proudest moments occurred in 2000 when MIT dedicated the Cross Student Lounge and Cross CAD/Cam Laboratory.

He was a member and an active supporter of Grosse Pointe Memorial Church.

Cross was a member of the Detroit Athletic Club, the Lochmoor Club of Grosse Pointe, the Delray Beach Club, and the Quail Ridge Country Club of Boynton Beach, Florida.

He was an avid golfer, trying to apply the same problem-solving approach that he perfected as a maker of machine tools, to his golf game, but with decidedly less success. Still, he was a good and steady player, who became a fierce chipper and putter when there was money on the line.

Next: George B. Dantzig »
Memorial Tributes: Volume 12 Get This Book
×