Get This Book
Visit NAP.edu/10766 to get more information about this book, to buy it in print, or to download it as a free PDF.
« Previous: Dean E. Wooldridge
Page 354 Share Cite
Suggested Citation:"Leo Young." National Academy of Engineering. 2008. Memorial Tributes: Volume 12. Washington, DC: The National Academies Press. doi: 10.17226/12473.
× 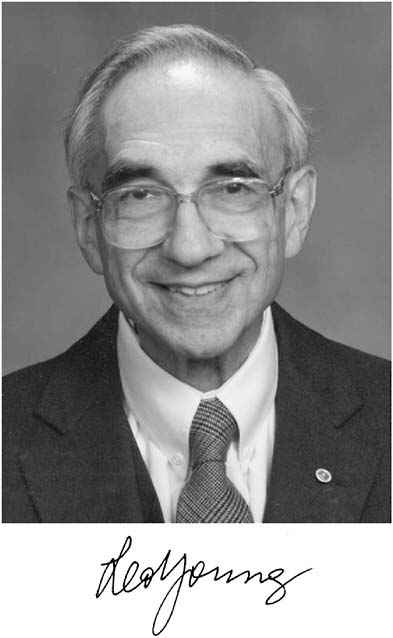 “For contributions to microwave technology and to the management of national security research.”

LEO YOUNG, a scholar, leader, and gentleman and retired director of research at the U.S. Department of Defense, died on September 14, 2006, at the age of 80.

When I was asked by the National Academy of Engineering to write a memorial tribute to Leo Young, my eyes teared up. I had my doubts about whether I could do justice to this giant whom I had initially come to know through his reputation as a scholar. After having had the privilege of meeting, knowing, and befriending Leo, I came to appreciate his gifts as a visionary and a wonderful human being.

I had the opportunity to visit Leo and his wife Jo-Ellen at their home in Baltimore a few months before Leo’s passing. Jo-Ellen, an accomplished and renowned educator in her own right, prepared lunch, and the three of us reminisced together. Leo then gave me a copy of a book he had just completed, Letters to My Grandchildren, from which I learned even more about this remarkable man. As he said in his memoirs, he had four separate careers that encompassed industry, academia, government, and consulting. I would add that he excelled in all of them.

Leo was born in Austria in August 1926. His father was a successful physician, and his mother valued education above all. In 1938, to escape the Nazis, the family moved to England, where Leo received a B.A. in mathematics in 1945, a B.A. in physics in

1947, and an M.A. in physics in 1950, all three from Cambridge University. He then began working as a radar engineer.

In 1959, while doing research on radar at Westinghouse, he obtained a Ph.D. from Johns Hopkins University, thereby beginning his long-standing relationship with Johns Hopkins. He received an honorary degree of doctor ofhuman letters from the university in 1989 and was presented the Woodrow Wilson Award for Distinguished Government Service in 2001. He also served on several advisory committees of the Whiting School of Engineering, including the Dean’s Advisory Committee, for many years.

From 1960 to 1973, Leo led a group of researchers at the Stanford Research Institute in California, while teaching courses at Stanford University and at the Technion, the Israel Institute of Technology. In 1974, he joined the Naval Research Laboratories in Washington, D.C., then moved to the Office of the Secretary of Defense (OSO) as director of research, which included oversight of the Army/Navy/Air Force/DARPA basic research programs. In addition, he led the University Research Initiative, which promoted multidisciplinary research. Leo was also a supporter of the establishment of the Small Business Innovation Research (SBIR) Program.

Leo retired from his government position in 1994, but he continued working as a consultant and a member of the board of Filtronic. In 1997, Leo became a foreign member of the Royal Academy of Engineering (U.K), and in 1999, he was elected a member of the National Academy of Engineering (NAE). In 2005, NAE presented him with the Arthur M. Bueche Award “for leadership in sponsoring collaborative research programs among academic, industrial, and government engineers and scientists.”

Leo held 20 patents, published numerous scholarly papers, and authored, coauthored, or edited 14 books, including Microwave Filters, Impedance-Matching Networks, and Coupling Structures, coauthored with G.L. Metthaei and E.M.T. Jones, a 1,100-page book that still sells well after 40 years, has been translated into Russian and Chinese, and is referred to as “the Bible” by microwave engineers. As Leo often said, microwave filters were among his primary interests, along with wireless communications and basic research policy and conduct as applied to national defense.

I knew and respected Leo Young long before I had the privilege of meeting him. Undoubtedly, many engineers and scientists are also familiar with his name and his work, although they may never have met him.

As reflected in the title of his memoirs, Letters to My Grandchildren, Leo had a deep passion and devotion to his large extended family. His first wife, Fay Young, the mother of his three biological children, died in 1981. She was a school psychologist. He gained three stepchildren from his second marriage to Ruth Breslow-Young, a social worker and director of the Jewish Council for the Aging in Washington. Ruth died in 1996. Finally, three more stepchildren were added when he married Jo-Ellen Turner, a college English professor. As a result, he could proudly proclaim that 19 grandchildren honored him by calling him grandpa. His entire family was present for his 80th birthday celebration.

Next: Appendix »
Memorial Tributes: Volume 12 Get This Book
×