Get This Book
Visit NAP.edu/10766 to get more information about this book, to buy it in print, or to download it as a free PDF.
« Previous: James William Westwater
Page 342 Share Cite
Suggested Citation:"J. Edward White." National Academy of Engineering. 2008. Memorial Tributes: Volume 12. Washington, DC: The National Academies Press. doi: 10.17226/12473.
× 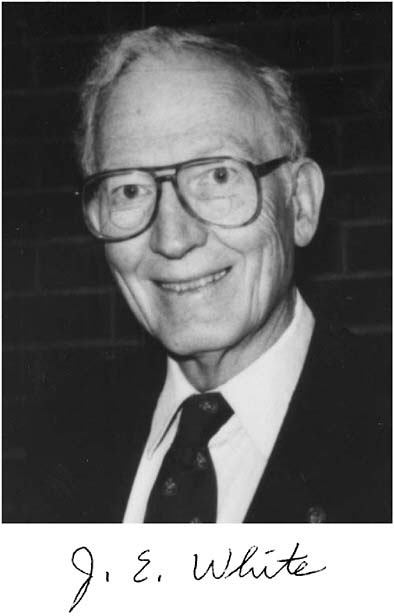 “For significant and outstanding advances in several fields of geophysics, as well as his clear transmission of these advances to students and colleagues.”

JAMES EDWARD (ED) WHITE, a highly respected and accomplished geophysicist, died peacefully on January 30, 2003. Dr. White was appointed in 1976 as the first recipient of the Charles Henry Green Endowed Chair in Exploration Geophysics at the Colorado School of Mines (CSM), a position he held until his retirement in 1988.

Ed was known for his ability to communicate difficult concepts in lucid, polished prose for his students, many of whom became renowned geophysicists around the world. He was justly proud to receive the Halliburton Award for outstanding teaching and scholarship at CSM, and he remained active as an emeritus professor, despite the ravages of 20 years of affliction with Parkinson’s disease.

Ed was born in Cherokee, Texas, May 10, 1918, but was raised and attended schools in Fredericksburg, a German community in the hill country 60 miles west of Austin. After graduation as valedictorian from Fredericksburg High School, he attended UT-Austin, where he received a B.A. in physics in 1940 (with honors and membership in Phi Beta Kappa). On February 1, 1941, while working on a master’s degree, Ed married UT art student Courtenay Brumby, from Houston. When he decided to accept a defense position at MIT in Boston, the completion of his master’s degree in physics and mathematics had to be delayed. He completed his degrees in 1946, when the couple returned to Austin.

During World War II, Ed was director of the Underwater Sound Laboratory of the U.S. Naval Research Center at MIT. He received his Ph.D. in physics and electrical engineering from MIT in 1949. He then spent more than two decades working in industry, first for Magnolia Mobil Laboratories, Dallas, Texas (1949–1955), then as one of the founders of Marathon Research Center, Littleton, Colorado (1955–1969), and subsequently as vice president of Global Universal Sciences (1969–1973), first in Midland and then El Paso, Texas.

Ed’s research in industry resulted in seminal contributions to four areas of seismic prospecting that are increasingly used and valued today: shear-wave prospecting, vertical seismic profiling, full-waveform acoustic logging, and attenuation of seismic waves. Ed’s impressive list of publications in these areas is complemented by three widely used books: Seismic Waves (1965); Underground Sound (1983 and translated into Russian and Chinese); and Production Seismology, coauthored with Ray Sengbush (1986). More than 20 patents were issued to Ed and his associates, and, in 2000, the Society of Exploration Geophysicists (SEG) published Seismic Waves: Collected Works of J.E. White.

Ed’s prolific career did not keep him from contributing his time and energy to many technical societies and government agencies. He was vice president of SEG in 1964, served as president in 1967, received honorary membership in 1976, and was awarded the Maurice Ewing Gold Medal in 1986.

His other honors included the Piotr L. Kapitsa Gold Medal from the Russian Academy of Sciences in 1996 and honorary membership in the Chinese Geophysical Society in 2002. Ed was also a fellow of the Acoustical Society of America and a member of the American Geophysical Union, European Association of Exploration Geophysicists, American Association for the Advancement of Science, and American Geological Institute.

Because he and Courtenay loved to travel and to learn about other cultures, Ed participated in a number of international scientific programs, which he promoted and implemented. He was one of the first American geophysicists to visit postwar Russia, where he established close and enduring ties with the Russian geophysical community. In 1965, Ed was a member of a six-man delegation, sponsored by the U.S. Department of State, that surveyed the status of geophysical exploration in the Soviet Union. Ed and Courtney paid another visit in 1971 and spent an academic year there (1973–1974) as part of an exchange program between the National Academy of Sciences and the Soviet Academy of Sciences (plus one month in Zagreb, Yugoslavia). While in Moscow at the Institute of Physics of the Earth, Ed was able to visit centers of applied geophysical research throughout the Soviet Union.

As SEG president, Ed encouraged collaborations between SEG and other scientific societies. In 1981, geophysicists from the United States and China jointly chaired a conference in Beijing. Ed was one of 40 geophysicists who spent three weeks visiting geophysicists across China, and he made a point of asking to see those who had not been heard from during the difficult years of the Cultural Revolution. He was honored to acknowledge those individuals and their contributions.

In 1987, Ed was selected by the National Academy of Engineering (NAE), supported by the World Bank, to conduct a month-long evaluation of the academic program of Changchun College of Geology in Jilin Province, Manchuria. Ed taught two intensive courses there in geophysics and mathematics. These and other collaborations led to many exchanges of faculty and students between the United States and China.

Ed regarded his election to NAE in 1989 as his highest honor. His NAE citation reads: “For significant and outstanding advances in several fields of geophysics, as well as his clear transmission of these advances to students and colleagues.” Ed always appreciated the support of his colleagues, but he was especially grateful for the encouragement and understanding of Courtenay, his wife and companion for 63 years. Ed took great pride in his four children: Becky Vanderslice, Marie Jamieson, Coco Forte, and Duffie White, and his seven grandchildren.

Next: Dean E. Wooldridge »
Memorial Tributes: Volume 12 Get This Book
×