Get This Book
Visit NAP.edu/10766 to get more information about this book, to buy it in print, or to download it as a free PDF.
« Previous: Richard Henry Bolt
Page 56 Share Cite
Suggested Citation:"Leon E. Borgman." National Academy of Engineering. 2008. Memorial Tributes: Volume 12. Washington, DC: The National Academies Press. doi: 10.17226/12473.
× 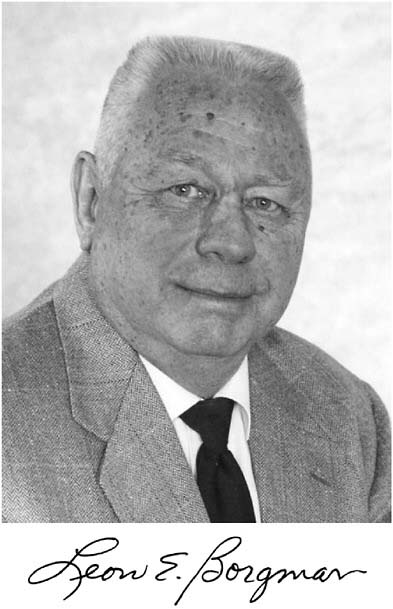 “For contributions to the theory and practice of ocean wave statistics, probabilistic hydrodynamic loading, and risk analysis of ocean structures.”

BY JEFFREY A. MELBY

LEON E. BORGMAN, distinguished emeritus professor of geology and geophysics and statistics, University of Wyoming, and the father of modern ocean-wave statistical analysis, died on February 5, 2007, at the Cheyenne Regional Medical Center in Cheyenne, Wyoming. Born in Chickasha, Oklahoma, on February 16, 1928, he received a B.S. in geological engineering from the Colorado School of Mines in 1953 and, from 1953 to 1959, worked for the Shell Development Company, Houston, Texas, as an oceanographic engineer. He received an M.S. in mathematics from the University of Houston in 1959 and a Ph.D. in statistics from the University of California, Berkeley, in 1962.

Leon began his academic career in 1961 at the University of California, Davis, where he taught for six years, and the University of California, Berkeley, where he taught for three years. He came to the University of Wyoming in 1970 as professor of geology and statistics and retired in 1997 as distinguished emeritus professor of geology and geophysics and statistics. During that time, he mentored many students, both at the university and in the greater engineering community. After his retirement and until the time of his death, he was a private consultant.

Leon Borgman was well known in several disciplines for his extraordinary ability to use cutting-edge statistical theories and concepts to solve complex engineering and scientific problems. The subjects of his research included the theory and practice of ocean-wave statistics, probabilistic hydrodynamic loading, risk analysis in coastal engineering, statistical simulation for geophysical modeling, geostatistics of mineral deposits and environmental assessment, and fracture mechanics. In his distinguished career, he produced more than 40 refereed journal articles and 160 total publications. He was also well known for producing widely used computer programs for ocean, coastal-wave, and water-level analyses and simulations, as well as geophysical and groundwater analyses and simulations.

Leon was the recipient of numerous honors and awards, including the University of Wyoming’s George Duke Humphrey Distinguished Faculty Award in 1981 and the International Coastal Engineer Award from the American Society of Civil Engineers in 1994. In 1998, he was recognized for professional distinction by the Offshore Technology Research Center (Texas A&M University) and was inducted into the Texas A&M Technology Hall of Fame. In 1999, Emeritus Professor Leon E. Borgman became the first University of Wyoming faculty member ever inducted into the National Academy of Engineering, the highest honor an engineer can receive.

Leon had many outside interests and was an accomplished calligrapher, custom knife maker, and dog trainer. He was an outdoorsman who treasured time spent with his family while hiking, fishing, camping, or just collecting rocks. He had a lifelong passion for learning and the following quote by John Muir seemed to fit him well:

As long as I live, I’ll hear waterfalls and birds and winds sing. I’ll interpret the rocks, learn the language of flood, storm, and the avalanche. I’ll acquaint myself with the glaciers and wild gardens, and get as near the heart of the world as I can.

Leon is survived by his wife, Betty, his sons and their wives, Eric and Julie, and Michael and Cherilyn, and grandchildren, Chance and Chelsea. Also surviving are four brothers and two sisters and their families. A memorial service to celebrate his life was held on April 28, 2007, in the University of Wyoming Fine Arts Center Theater.

Next: Sol Burstein »
Memorial Tributes: Volume 12 Get This Book
×