Get This Book
Visit NAP.edu/10766 to get more information about this book, to buy it in print, or to download it as a free PDF.
« Previous: Front Matter
Page 1 Share Cite
Suggested Citation:"Willis Alfred Adcock." National Academy of Engineering. 2008. Memorial Tributes: Volume 12. Washington, DC: The National Academies Press. doi: 10.17226/12473.
× 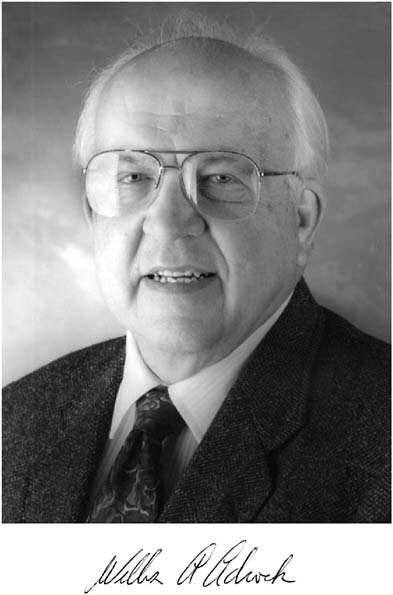 “For contributions to the advancement of silicon material and device technology.”

WILLIS ALFRED ADCOCK was born in St. John’s, Quebec, Canada, on November 25, 1922, and died in Austin, Texas, on December 16, 2003. He immigrated to the United States in 1936 and became an American citizen in 1944. Dr. Adcock was an inventor, physicist, electrical engineer, and educator. After a distinguished career with Texas Instruments (TI), he became a professor of electrical and computer engineering (ECE) at the University of Texas (UT) in 1986. In the same year, he was appointed to the Cockrell Family Regents Chair, a position he held until becoming chair professor emeritus in 1993.

After graduating high school in upstate New York, Dr. Adcock attended Hobart College, where he earned a B.S. cum laude in 1943. In 1944, he joined the U.S. Army and became a member of the technical staff of the Clinton Laboratories at Oak Ridge, Tennessee, where he was a very junior member of the team that worked on the development of the atomic bomb. He loved to tell the story of when an army officer took him into Knoxville, found a federal judge, and ordered that G.I. Adcock be naturalized so he could be given security clearance. The judge could only ask for his name, rank, and serial number.

After the war, Dr. Adcock pursued graduate studies at Brown University, where he received his Ph.D. in physical chemistry in 1948. Once he graduated, he was a technical staff member for Stanolind Oil and Gas Company in Tulsa, Oklahoma, until

1953, when he joined TI, where, as manager of the Development Department and Integrated Circuits Department, he made significant contributions to his field. He recruited Jack Kilby and then supported the research that led to the invention of the integrated circuit in 1958.

Dr. Adcock’s work at TI included growing the first silicon boule, which enabled the construction of the silicon transistor, thereby making the company a world leader in semiconductors. This achievement, by Dr. Adcock and his colleague Gordon Teal, was a technological tour de force, because silicon was much more difficult to purify and crystallize than germanium, which was the element then used for transistors. The technological impact of silicon transistors on microelectronics cannot be overemphasized.

In May 1954 at the National Conference on Airborne Electronics, Drs. Adcock and Teal presented a seminal paper entitled “Some Recent Developments in Silicon and Germanium Materials and Devices” describing the first working silicon transistors. In Crystal Fire, a book by Michael Riordan and Lillian Hoddeson (W.W. Norton and Co., 1997), the authors describe how they demonstrated the superior electronic properties of silicon and the reduction of electrical leakage at high operating temperatures. They first dunked an amplifier made of germanium transistors into hot oil, causing a record player to stop working instantly. When an amplifier made of brand new silicon transistors was dunked into the same oil, the record player continued emitting the dulcet tones of Artie Shaw’s “Summit Ridge Drive.” Silicon transistors rapidly supplanted prevailing germanium devices. To take just one example, silicon devices were a godsend for the development of military electronic hardware that had to function in environmentally extreme conditions.

Dr. Adcock left TI briefly in 1964 to work as technical director for Sperry Semiconductor in Norwalk, Connecticut, but he returned to TI in 1965 as manager of advanced planning and technical development. He was later made assistant vice president and finally vice president of corporate staff from 1982 to 1986. He retired from the company in 1986 as vice president and principal fellow.

Dr. Adcock then moved to Austin, Texas, where he held the Cockrell Family Regents Chair in ECE at UT. Dr. Adcock established a vigorous research program on semiconductor manufacturing and developed a graduate course on statistical process control and design of experiments. When SEMATECH, the research consortium, was created to reestablish U.S. leadership in semiconductor manufacturing in the face of Japanese competition, Drs. Adcock and Al Tasch were instrumental in establishing the SEMATECH Research Center of Excellence at UT. Dr. Adcock was the founding director of the center, which led to fruitful interactions between the university and SEMATECH. In 1993, Dr. Adcock became chair professor emeritus of the ECE department.

Dr. Adcock was a fellow of the Institute of Electrical and Electronics Engineers and American Association for the Advancement of Science and a member of the National Academy of Engineering and American Chemical Society. He was also a member of Sigma Xi and Phi Beta Kappa and a principal fellow of Texas Instruments. In 1989, he was awarded an honorary degree from his alma mater, Hobart College. Among his many other accomplishments, Dr. Adcock held a number of basic patents for digital photography and, at the time of his death, was working on a unique torque converter. His first patent in this area was issued on June 3, 2003, just seven months before he died.

Thus, even in retirement, he was as active as ever. He served for a time as president of both the TI Austin Retirees Club and the Austin English Speaking Union. He was a member of the McDonald’s Observatory Visitors Council, and he and his wife, Sara, often attended performances by the Austin Symphony and Austin Lyric Opera. The couple also loved to travel and made numerous trips, including tours of the British Isles and Ireland, with groups from their church, the Episcopal Church of the Good Shepherd.

Dr. Adcock married Eleanor Goller in 1943, and the couple had four children before Eleanor passed away. In December 1970, he married Sara McCoy. Everyone who knew Willis would happily concur with the description of him by T.R. Reid in his

classic book, The Chip: How Two Americans Invented the Microchip and Launched a Revolution (Simon and Schuster, 1984). Willis Adcock was “a zesty sprite who talks a mile a minute and still can’t keep up with his racing train of thought.” Those who knew him best would agree that these were the marks of the brilliant mind of a warm and lovable human being.

Next: Robert Adler »
Memorial Tributes: Volume 12 Get This Book
×