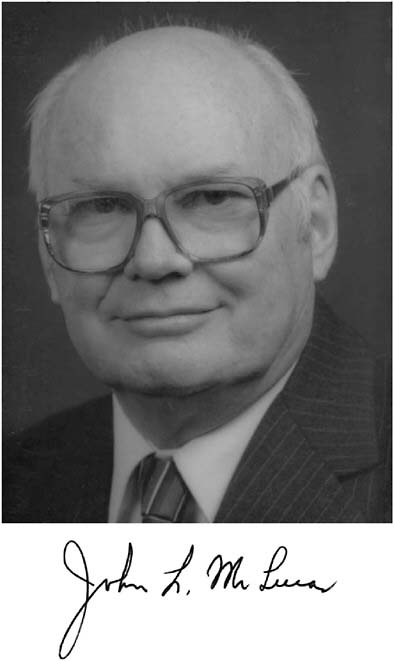 “For conception and development of electronic reconnaissance devices.”

JOHN LUTHER MCLUCAS—businessman, scientist, administrator, author, and visionary—died of respiratory failure on December 1, 2002, in Alexandria, Virginia. With his death, we lost a distinguished public servant and a good friend. John was exceptional in how he embraced public service. He considered it to be a privilege, a duty, and an opportunity to contribute to the public good.

John was born in North Carolina. After his father died when he was 2, John was raised by various relatives in South Carolina. He worked his way through Davidson College with the assistance of an aunt who sent him $50 a month. He went on to earn a master’s degree in physics at Tulane University in 1943 and later a doctorate in physics from Penn State University in 1950.

During World War II, after advanced training at Princeton and MIT, John served as a naval radar officer in the Pacific, where his ship was damaged by a kamikaze attack in the Battle for Okinawa. While attending Penn State after the war, he began working for Haller, Raymond, & Brown Inc., eventually becoming the president of HRB-Singer (now part of Raytheon) and the father of four children. While with HRB, John was awarded 10 patents as he contributed to pioneering developments in infrared aerial photography, radar imaging,

In 1962 he left this thriving company and moved his family to Washington, D.C., where he became a deputy to Dr. Harold Brown in the Pentagon Directorate of Defense, Research, and Engineering. As John explained to other youthful executives in the Young Presidents Organization, “I believe that a man has an obligation to serve his country through government service if he has that combination of background, education, and personal characteristics which will enable him to be effective.” In his Pentagon position, John was responsible for initiating and overseeing many important R&D programs. He and I spent many hours during this period discussing and debating intricate technical issues.

John’s next adventure in public service came in 1964, when he went to Paris as NATO’s assistant secretary-general for scientific affairs. Two years later he returned to the states to become president of the MITRE Corporation, a Massachusetts-based federal contract research center specializing in communications, command, control, and air defense systems. Under John’s leadership, the company provided critical technical support to air operations in southeast Asia and diversified into civilian fields where its systems engineering expertise could be beneficial.

In 1969 John once again answered his country’s call, returning to the Pentagon as undersecretary of the Air Force with a covert collateral duty as director of the then totally secret National Reconnaissance Office (NRO). He and Secretary Robert C. Seamans formed a close partnership in leading the Air Force through the last four years of the Vietnam War. In his NRO position, John managed replacement of the Corona reconnaissance satellite and development of a new electro- optical system that would soon revolutionize our nation’s intelligence capabilities.

After Bob Seamans’s departure in 1973 (to become president of the National Academy of Engineering), McLucas took over as secretary of the Air Force and skillfully managed its transition into the post-Vietnam era. Among the successful programs

that John most contributed to were the Airborne Warning and Control System (AWACS) and the F-16 fighter. He also helped modernize the Air Force’s culture through his strong support of equal opportunity for minorities and women. For example, he favored opening the Air Force Academy to female cadets and personally made the decision to allow women officers to become pilots.

In 1975, when President Gerald Ford needed a trusted and experienced executive to run the Federal Aviation Administration, he called on John McLucas. While at the FAA, John provided needed leadership on a variety of sensitive issues, including aircraft safety, jet noise, passenger screening, and handling the militant Professional Air Traffic Controllers Union. In 1977 John joined the Commercial Satellite (Comsat) Corporation, where he held three senior executive positions before reaching its mandatory retirement age in 1985.

John, however, never retired from public service. He was always in demand to serve on various boards and study groups and frequently testified as an expert witness for congressional committees. While still at Comsat, he was appointed by President Ronald Reagan to lead a task force that set controversial but badly needed new standards for the number of pilots required on long-distance airliners. In the early 1990s he served on the FAA’s Research, Engineering, and Development Advisory Committee and chaired the NASA Advisory Council. He was also a member of the Defense Science Board, the Air Force Scientific Advisory Board, and Boeing’s Technical Advisory Committee.

John was very active in professional organizations. A fellow of the Institute of Electrical and Electronics Engineers (IEEE) since 1962, a member of NAE since 1969, and a fellow of the American Institute of Aeronautics and Astronautics (AIAA) since 1971, he served as AIAA president from 1984 to 1985 and on the National Academies’ Committee on Science, Engineering, and Public Policy from 1981 to 1984 and again from 1990 to 1993. Among the honorary societies to which he belonged were Sigma Pi Sigma and Sigma Xi.

A great proponent of commercial space and other high-tech

enterprises, he served in the late 1980s and 1990s as a director or chairman of the board at the General Space Corporation, External Tanks Corporation, Quest-Tech, Avion Systems, C-COR Electronics, and Orbital Sciences Corporation. He served in similar capacities for scientific and cultural organizations, including the University Corporation for Atmospheric Research, the U.S. Space Foundation, the U.S. Association for the International Space Year, the Wolf Trap Foundation for the Performing Arts, and the Air Force Historical Foundation. He was especially proud of his role as chairman of the Arthur C. Clarke Foundation of the United States from 1983 to 2002 and as member and chairman of the International Space University Board of Trustees from 1990 to 2002.

John enjoyed the variety of his assignments and undertook each job determined to meet his responsibilities and then some. He sometimes commented rather wryly to me that, in all these activities, he hadn’t paid much attention to increasing his net worth. But at least he was comfortable and enjoyed working with a wide range of associates and friends. John was generous with what he had, for example, being one of two initial donors to the X-Prize Foundation and giving to many other worthy causes. He is survived by his wife, Harriet, four children, five stepchildren, and nine grandchildren.

Our country is indeed fortunate to have counted Dr. John McLucas among its citizens. He was a capable and successful businessman, inquisitive scientist, and ingenious engineer who welcomed challenges and sought to solve real-world problems.

Those of us who knew him feel a deep personal loss, but are thankful he left a lasting legacy that includes two major books. The first, Space Commerce, was published by Harvard University Press in 2001. The second is an especially informative memoir (completed after his death by Kenneth J. Alnwick and Lawrence R. Benson), Reflections of a Technocrat: Managing Defense, Air, and Space Programs During the Cold War. It was published by Air University Press in 2006 and is available for purchase or digital downloading at http://www.au.af.mil/au/aul/aupress/catalog/books/McLucas_B-101.html.

Next: Ruben F. Mettler »
Memorial Tributes: Volume 12 Get This Book
×