Get This Book
Visit NAP.edu/10766 to get more information about this book, to buy it in print, or to download it as a free PDF.
« Previous: Melvin W. Carter
Page 74 Share Cite
Suggested Citation:"Harold Chestnut." National Academy of Engineering. 2008. Memorial Tributes: Volume 12. Washington, DC: The National Academies Press. doi: 10.17226/12473.
× 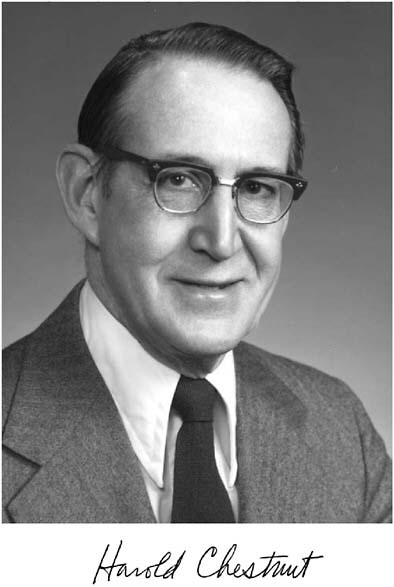 “For contributions to the theory and practice of control systems, and systems engineering.”

HAROLD CHESTNUT, engineer and visionary, died in Schenectady, New York, on August 29, 2001, at the age of 83. He was born a few miles from where he died, worked much of his life at the General Electric Company (GE) nearby, and made major contributions to engineering and the engineering profession throughout the world.

Hal earned a B.S. (1939) and an M.S. (1940) in electrical engineering from the Massachusetts Institute of Technology (MIT) and was later awarded honorary doctorates in engineering from Case Institute of Technology (1966) and Villanova University (1972). Although he was not an academician, he was involved in education from his early years as an engineer, when he was both a student and an instructor in the well-known GE Advanced Engineering Program (Electrical Engineering Course) from 1940 to 1943. At that time there were very few engineering doctoral programs at U.S. universities, and GE’s in-house program set a high standard for industry-developed advanced technical education attuned to the needs of the company.

In the 1950s and 1960s, Hal wrote four textbooks in the fields of control and a two-volume work, Servomechanisms and Regulating Systems Design, coauthored with Robert W. Mayer (John Wiley & Sons, Volume 1 in 1951 and Volume 2 in 1955). Servomechanisms established Hal’s international reputation,

which was a significant factor in his future leadership in the industry.

In his early years at GE, Hal contributed to studies of the stability of electric power systems and brought some of the lessons from this work into the classrooms of the Advanced Engineering Program. From the middle of World War II to the mid-1950s, working in the GE Aeronautics and Ordnance Department, he contributed to the design and development of various fire-control, aircraft, and guided-missile systems. He later managed the Systems Engineering and Analysis Branch of the GE Advanced Technology Laboratory, which eventually merged into the GE Corporate Research and Development Laboratory in Schenectady, where he was responsible for aspects of automatic control and information systems on many projects, including rapid transit and the Apollo mission.

Hal was always interested in communication among professionals, and he ultimately achieved the top leadership roles in two major professional technical societies. After the success of Servomechanisms, he was one of the best-known American personalities in the field of control engineering, and in 1957, when the International Federation of Automatic Control (IFAC) was founded, Hal was elected its first president.

IFAC was founded during the cold war, and the organizers were faced with choosing a Russian or an American for president. Although Hal was not a member of the provisional committee that founded IFAC, Rufus Oldenberger, a professor of mechanical engineering at Purdue University who led the American “delegation,” argued that Hal was the best person for the job. Although it had been agreed that the biannual (later triennial) World Congresses of IFAC would be held in the home country of the president, in light of cold war realities, a decision was made that an American would be the first president but the first World Congress would be held in Moscow. So although the first president, Hal, was an American, the second president, Alexander Letov, a Russian, presided over the first IFAC World Congress in Moscow in 1960.

In the 1950s and 1960s, Chestnut took on leadership roles in the American Institute of Electrical Engineers (AIEE)

and Institute of Radio Engineers (IRE). When these two organizations merged into the Institute of Electrical and Electronics Engineers (IEEE) in 1963, he was an active participant in the new organization, in which he served as vice president and leader in several technical branches and in IEEE publications. In 1973, he was elected president of IEEE, which by then had members in nearly 100 countries. During his IEEE years, Hal was an editor of AUTOMATICA, a commercial journal published by Pergamon Press, and a book series on systems engineering and analysis, published by John Wiley and Sons; he was still editor of the series when he retired from GE in 1983.

Late in his career and then after retirement, Hal became interested in promoting global stability by applying the fundamental principles of control engineering to resolving international conflicts. He reasoned that principles of control engineering might provide insights into international conflict resolution, so he formed a group in IFAC and organized workshops to explore the idea. The results of the workshop discussions involving control specialists from many countries were published in a series of workshop proceedings. In 1981, the Honda Foundation awarded Hal the Honda Prize “for his achievements associated with the promotion of humanitarian use of technology and as a world leader in systems engineering that encompasses electrical, electronic, instrumentation, and automatic control.” Hal used the Honda Prize stipend to create a small organization, the Foundation on Supplemental Ways to Increase International Stability (SWIIS), and he remained passionately devoted to SWIIS for the rest of his life. After retirement, he frequently called his younger colleagues who held leadership positions in professional societies to encourage them to broaden their views to reflect the impact of technology on international conflict resolution.

Hal received many honors during his lifetime, including election to the National Academy of Engineering in 1974. He was a licensed professional engineer in New York state and, in 1965, was given the Engineer of the Year Award by the Schenectady Chapter of the National Society of Professional Engineers. In addition to IEEE, he was a fellow of the American

Association for the Advancement of Science and the Instrument Society of America, president of the American Automatic Control Council (AACC) in 1962 and 1963, and recipient of the AACC Bellman Heritage Award in 1983. Case Western Reserve University named him a Case Centennial Scholar in 1980, and he was an IEEE Centennial Medalist in 1984. In 1990, he was awarded the Rufus Oldenberger Medal of the American Society of Mechanical Engineers and IEEE Richard Emberson Award for “distinguished service to the technical objectives of the IEEE.” In 1988, Dr. Chestnut and his family endowed the IFAC Control Engineering Textbook Prize, now known as the Harold Chestnut IFAC Control Engineering Textbook Prize, which is awarded triennially.

Hal began visiting at Lake Luzerne, New York, at age 5 and continued to visit the Adirondacks throughout his life. He enjoyed family gatherings, and sailing his Sunfish, and he was a lifelong swimmer. He also skied and played tennis. Many of these activities were shared with his family. Hal was a gardener who cultivated lilies and roses especially. He served as president of his local YMCA and was active in the Boy Scouts of America, attaining the rank of Eagle Scout. He served as president of his local Parent-Teacher Association and the First Unitarian Society of Schenectady, New York. He served on the World Federalist Board of Directors and a local citizens committee for public schools.

Hal had a special interest in keeping in touch with colleagues throughout the world, even after his own formal leadership roles were finished. He was a voracious reader, and it was not unusual for a friend in a leadership position in some professional organization to receive a call from Hal to discuss an issue that had appeared in a recent society newsletter or meeting minutes. His involvement in his profession was truly a lifetime commitment.

Ross Chestnut and Taylor Callaway Chestnut; son Andrew Trammell Chestnut, wife Heather Bee Chestnut, and daughter Christina Callaway Chestnut and son Zachary Blake Chestnut. Hal and Erma Ruth’s long marriage was a source of great strength and satisfaction to both of them. Erma Ruth earned a bachelor’s degree in mathematics from the University of Colorado and a master’s degree in guidance and a doctorate in education administration, both from the State University of New York at Albany. She accompanied Hal on many of his trips around the world, especially when he held leadership positions in IFAC and IEEE.

Next: Edgar F. Codd »
Memorial Tributes: Volume 12 Get This Book
×