Get This Book
Visit NAP.edu/10766 to get more information about this book, to buy it in print, or to download it as a free PDF.
« Previous: Ivan A. Getting
Page 134 Share Cite
Suggested Citation:"Kenneth W. Hamming." National Academy of Engineering. 2008. Memorial Tributes: Volume 12. Washington, DC: The National Academies Press. doi: 10.17226/12473.
× 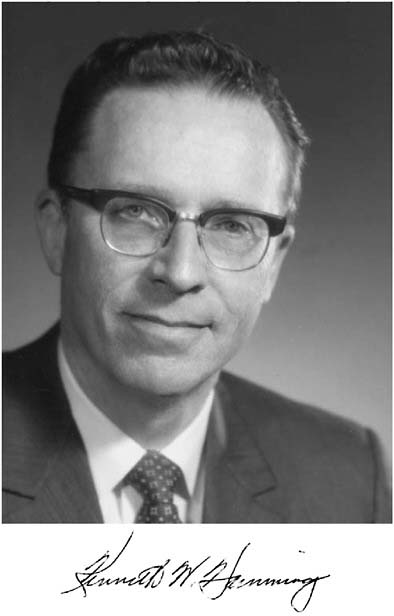 “For leadership in the design of large scale fossil-fuel and nuclear power plants.”

BY WILLIAM A. CHITTENDEN

KENNETH W. HAMMING, senior partner of Sargent & Lundy (S&L), one of the leading power plant design engineering firms in the world, an accomplished freshwater sailor, an accomplished musician, and a philanthropist, died on December 21, 2005, at the age of 87.

Born in the Albany Park Community of Chicago on September 22, 1918, Ken’s family moved eight years later to the North Park area in time for him to witness the replacement of the Swedish Covenant Church, where he first recalled hearing an organ “speak.” This experience may have inspired his lifelong interest in organs and pianos.

In 1935, Ken made the easy choice of attending the college next door to his home, North Park College, which he passed daily when he was growing up. Based on his interest in mechanical engineering, coupled with his strong desire to escape the demands of preparing for piano recitals, he enrolled in the preengineering curriculum. Following his graduation from North Park in 1937, he entered the General Engineering Program at the University of Illinois in Champaign-Urbana, where he received a B.S. in January 1940.

After graduation, Ken joined the Chicago consulting engineering firm of S&L, where he was initially assigned to the mechanical drafting room. Soon, however, he was transferred

to the mechanical engineering staff, where he performed theoretical analyses, produced reports, and participated in the design of steam-powered stations for private utilities. During the war years, he was heavily engaged in the design of the power plant at Oak Ridge, Tennessee, which supplied the gaseous-diffusion plant for the Manhattan Project. For a short time during 1944–1945, he left S&L to work as a weight-control engineer for the Consolidated-Vultee Aircraft Corporation in San Diego, California, but he soon returned to S&L, where he worked on the design of numerous steam-powered plants for Commonwealth Edison Company of Chicago.

In 1956, he became a partner in S&L and was made responsible for all of the company’s projects for Commonwealth Edison. In 1964, as manager of the Mechanical and Nuclear Department, he became responsible for all of the company’s mechanical and nuclear design work. In 1965, he was promoted to director of engineering, in 1966 to senior partner, and then to chief executive officer of the firm until his retirement in 1974, when the firm numbered some 3,400 employees.

During his career at S&L, Ken was directly responsible for the design of 16 Commonwealth Edison Company power plants with a total capacity of more than 5,000 MW. One of those plants, the Ridgeland Station (1948), was one of the first central stations to operate at 1,800 psig and 1050° F with a central control room for multiple units. This plant raised early concerns about the “downwash” of flue gases from short stacks dictated by a nearby airport and had an innovatively designed coal bunker to accommodate the finely crushed coal required for the boiler’s cyclone burners. The design of another plant, the Joliet Power Station of 1960, which incorporated one of the first applications of the “unit-train” concept for the delivery of coal, encountered many unusual design problems. In 1964, Ken was instrumental in the development of the “man-made lake” concept for cooling water for the Kincaid Station.

Ken had a wide range of interests. He continued to study and develop his musical abilities for the piano and the organ and was the proud owner of two Lowery organs. He played throughout his life for his own pleasure and the entertainment of his family and friends. In the mid-1960s, Ken developed a strong interest in sailing on Lake Michigan and was soon competing in local races. A few years later, in 1966, he entered weekly “offshore” races and then the 333-mile Mackinac Race from the Chicago Yacht Club to Mackinac Island, Michigan. As the seasons passed and Ken and his crew became more competitive, he graduated to larger and more sophisticated boats.

Perhaps the most exciting Mackinac race was in 1970, when severe storms with winds of 70 to 80 mph. severely damaged many of the boats in the 250-boat fleet, two-thirds of which had to drop out of the race. Ken and his crew sailed on to a third-place finish in their class and thirteenth in the overall fleet. In the course of his racing career, Ken developed a Mylar Genoa sail for use in low- or no-wind situations and a ratchet-winch handle to expedite hoisting and trimming sails.

Upon retiring from S&L, Ken turned from racing to cruising, for which he acquired a 57-foot Berger designed for cruising the Great Lakes. After several years, he donated the boat to the U.S. Naval Academy, and an academy crew sailed it from Egg Harbor, Wisconsin, through the Saint Lawrence Seaway to Annapolis, where it was a welcome addition to the academy’s fleet.

Ken had a strong sense of responsibility to the organizations that shaped his life and to his family. His notable contributions included the restoration of Viking Hall at North Park University, which renamed the building Hamming Hall in honor of Ken and his wife, Joyce. He also made substantial contributions to the University of Illinois College of Engineering at Champaign-Urbana; the Peninsula Art School in Door County, Wisconsin; the Wisconsin Land Trust in Door County; and other deserving groups.

Last, but surely not least, Ken was a devoted husband of nearly 54 years to his wife, Joyce, a devoted father to their three children, and a devoted grandfather to their eight grandchildren. To his many friends, associates, and family, Ken was truly a Renaissance man.

He is survived by his wife, Joyce; his daughter, Nancy; son, Stephen; and eight grandchildren, Melissa, Onalee, Christopher, Jenny, Julie, Annie, Nicole, and James Kenneth. A son, Greg, predeceased him.

Next: Heinz Heinemann »
Memorial Tributes: Volume 12 Get This Book
×