Get This Book
Visit NAP.edu/10766 to get more information about this book, to buy it in print, or to download it as a free PDF.
« Previous: Edgar F. Codd
Page 88 Share Cite
Suggested Citation:"Morris Cohen." National Academy of Engineering. 2008. Memorial Tributes: Volume 12. Washington, DC: The National Academies Press. doi: 10.17226/12473.
× 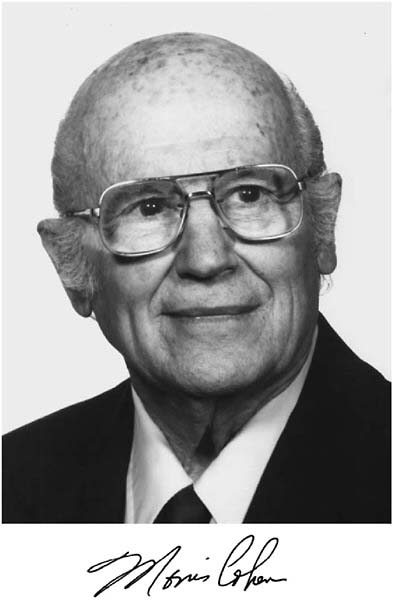 “For elucidation of strengthening mechanisms of steel and unification of engineering disciplines with materials science.”

BY EDWIN L. THOMAS AND GREGORY B. OLSON

MORRIS COHEN, institute professor emeritus at the Massachusetts Institute of Technology (MIT), passed away May 27, 2005, at his home in Swampscott, Massachusetts. Born in Chelsea, Massachusetts, in 1911, he began a lifelong association with MIT in the fall of 1929 when he enrolled as a freshman, expecting to apply a degree in metallurgy to the family business, which produced and refined lead-based alloys for metal type and solders. He earned a B.S. in metallurgy in 1933 and an Sc. D. in metallurgy in 1936, when he was appointed an instructor in the Department of Metallurgy. Rising through the academic ranks, he became a full professor in 1946, was named Ford Professor of Metallurgy in 1962, and was promoted to institute professor, MIT’s highest honor, in 1975.

Morris’s doctoral thesis, “Aging Phenomena in Silver-Copper Alloys,” was supervised by the noted metal physicist Professor John T. Norton, and his early work on improving the strength and toughness of metals was quickly connected to investigations of the causes of dangerous cracking in all-welded ships during World War II.

As associate director of the Manhattan Project at MIT, Morris worked on the development of processes to convert uranium powder into solid uranium metal; the resultant castings were used for the famous “pile” built in Chicago. Also during the war, he helped develop nonmagnetic steel that could be used

as armor plating on the bridges of ships and in locations near compasses in other military transport craft.

After the war, Morris and his students worked on explaining how heat treatment hardens and toughens tool and structural steels. They investigated the fundamentals of the martensitic transformation in steel and how this phase transformation improves its mechanical properties. Subsequent work on selfdiffusion and interdiffusion led to studies of microstructural changes during the tempering of iron alloys. Over a period of 50 years, Morris and his students created a body of basic knowledge on strengthening steel and made practical the ultrahigh-strength steels used today. Morris’s many seminal contributions to the mechanisms and kinetics of the martensitic transformation, tempering phenomena, strengthening mechanisms, age hardening of alloys, strain-induced transformations, and rapid solidification of alloys were milestones in the emerging field of materials science.

In 1971, Morris was elected a member of the National Academy of Sciences (NAS). When he received the phone message about his election, he thought it was a mistake because he was a metallurgist and an engineer, not a scientist, and he thought the call must have come from the National Academy of Engineering (NAE). However, a telegram confirmed that he had indeed been elected to NAS, one of the very few metallurgists to be so honored.

A year later, in 1972, he was elected to NAE. He subsequently served as a member-at-large of the National Research Council (NRC) Board on Assessment of the National Institute of Standards and Technology Programs (1986–1989), a member of the Steering Committee for the Materials Science and Engineering Study (1985–1989), and a member of the Panel for a Review of ONR Research Opportunities in Materials Sciences (1987–1988).

Morris’s service to the nation included taking on advisory roles to NAE, NAS, the National Science Foundation, and the National Aeronautics and Space Administration. In recognition of his fundamental work on martensitic transformation and the strengthening of steel, President Carter awarded him the

National Medal of Science in 1977. Morris liked to tell how President Carter, after reading the citation, said, “We need more of that,” which Morris interpreted as a presidential endorsement of martensitic transformations. A thorough review of his accomplishments, Morris and G.B. Olson, Dislocation Theory of Martensitic Transformations (Dislocations in Solids, Vol. 7, edited by F.R.N. Nabarro, North-Holland, 1986) was published at the time of his retirement from research. Most people in the field recognize that Morris did more than any other individual to advance the understanding of the martensitic mechanism and kinetics.

Morris was president of the American Society of Metals (ASM) and was twice presented with the ASM Howe Medal (1945 and 1949). In addition, he was a leader in the new field of materials science and engineering; he was co-chair of the NRC Committee on the Survey of Materials Science and Engineering that published Materials and Man’s Needs, often called the Cohen report. This study has had a significant influence on national policy on materials education and research. In 1987, Morris was awarded the Kyoto Prize in Advanced Technology. He published more than 300 research papers and supervised more than 150 graduate and postdoctoral students during his long tenure at MIT.

A talented violinist in his youth, Morris had a lifelong interest in the arts. He had season tickets to the Boston Symphony Orchestra from the time he was a freshman at MIT and frequently provided his staff and students with tickets to musical and theatrical performances. He was an ardent collector of American impressionist paintings, particularly the works of John Joseph Enneking and Joseph Eliot Enneking; his collection was bequeathed to the Cape Cod Museum of Art. He was also a founder and past president of Temple Sinai in Marblehead, Massachusetts.

Morris Cohen is survived by his son Joel, two sisters, three grandchildren, and five great-grandchildren. His scientific vision and dedication to the field of materials science and engineering, as well as his warm and gracious manner, are deeply missed.

Next: Ralph Cross »
Memorial Tributes: Volume 12 Get This Book
×