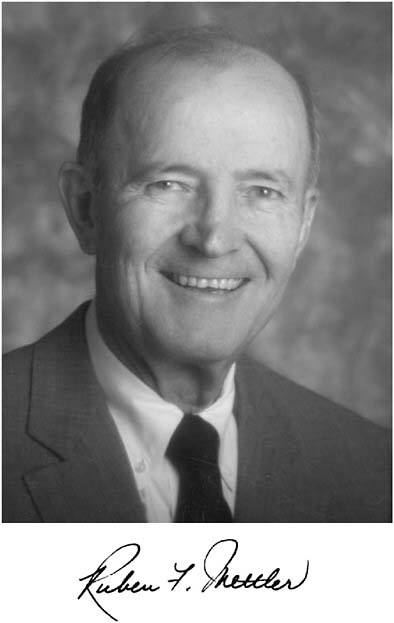 RUBEN F. METTLER, a guiding force in the American aerospace industry and former CEO of TRW, died on May 23, 2006, at the age of 82.

Ruben, or Rube as he was generally called, was born in Shafter, California, a small town about 60 miles north of Los Angeles, on February 23, 1924. While doing chores on the farm where he grew up with nine siblings, he first experienced the “hierarchy of duties” in a complex organization, which probably planted the seeds of his future CEO managerial style. “I don’t know that a large family directly translates into being comfortable in a corporate setting,” he once told a journalist, “but there is no question that a large family is not a likely place to find a highly egocentric person.”

A bright, ambitious student who pushed himself to excel, Rube won a scholarship to Stanford and began his undergraduate career there in 1941, intending to study law. However, with the attack on Pearl Harbor that December, he changed his plans. Expecting to be drafted, he enlisted in the Navy at the end of his freshman year. Because he had shown an aptitude for calculus and chemistry at Stanford, the Navy sent him to Caltech, where he studied radar and electronics in the V12 training program and received a bachelor’s degree in 1944. He liked the experience so well that, after specializing in radar

systems during the war, he abandoned all thoughts of becoming a lawyer and returned to Caltech to earn his M.Sc. (1947) and Ph.D. (1949) in electrical and aeronautical engineering.

When he left Caltech, he was hired as associate director for systems research and development by two earlier graduates, Si Ramo and Dean Woolridge, who were leading the Hughes Aircraft Company. In 1954, he left Hughes for Washington, D.C., where he worked as a consultant to the U.S. Department of Defense and where he met his future wife, Donna. The couple was married in May 1955. Their first son, Matthew, was born in 1958, and their second son, Daniel, came along in 1960.

Returning to California in 1955, he joined Ramo Wooldridge Corporation, later TRW, where he spent the rest of his career. He was a key person in developing the U.S. capability in intercontinental ballistic missiles (ICBMS). From program director of the Thor Program, he subsequently directed the Atlas, Titan, and Minuteman missile programs for Space Technology Laboratories (a corporation owned by TRW). He was named president of the Space Technology Laboratories in 1962, president of the Systems Group in 1963, member of the Board of Directors of TRW in 1965, president and chief operating officer in 1969, and chairman of the board and CEO in 1977. He served in that capacity until he retired at the end of 1988. Among his many accomplishments at TRW, he was responsible for the Pioneer and Orbiting Geophysical Observatory satellites and the lunar module descent engine used for the moon landings.

Rube Mettler received many honors during his lifetime, starting at an early age. In 1954, he was named the Nation’s Most Outstanding Young Electrical Engineer; in 1955, he was one of the U.S. Junior Chamber of Commerce’s Ten Outstanding Young Men; in 1964, the Engineering Societies of Southern California elected him Engineer of the Year; and, in 1965, he was elected to the National Academy of Engineering. In 1966, Caltech named him one of 23 alumni to receive the first Distinguished Alumni awards, the institution’s highest honor. He was a fellow of the Institute of Electrical Engineers and the American Institute of Aeronautics and Astronautics.

Ruben Mettler also had a keen interest in people who were disadvantaged. In 1977, President Carter appointed him to develop a program to promote the hiring of Vietnam War veterans. This program was credited with reducing the unemployment rate from 15 percent a year, double the national average, to less than 8 percent. As chairman of the United Negro College Fund, he was credited with raising $110 million in two years. In recognition of his humanitarian efforts, he received the National Human Relations Award of the National Conference of Christians and Jews in 1979 and the Roy Wilkins Memorial Award in 1981 from the L.A. chapter of the NAACP.

Ruben Mettler not only advised several presidents of the United States on defense matters but also was recognized as a leader by his business associates. He chaired the National Alliance of Business (1978–1979), the Business Roundtable (1982–1984), and the Business Council (1985–1986).

Rube had a long association with Caltech. In addition to his three academic degrees and the Distinguished Alumni Award, he was named a trustee in 1968, chaired the Board of Trustees from 1985 to 1993, and was a life member of the board at his death. He also chaired a presidential search committee in 1986–1987 and mentored the selected candidate for several years. He encouraged a successful campaign for Caltech that raised $376 million and funded the Ruben and Donna Mettler Professorship. He was a life member of the Caltech Associates and President’s Circle and a member of the Caltech Alumni Association.

After his retirement from TRW, he remained an active advisor to many organizations. A trustee of St. John’s Health Center Foundation from 1992 to 2006, he cochaired a capital campaign that raised $125 million to rebuild St. John’s Hospital in Santa Monica after the Northridge earthquake of 1994.

Ruben Mettler was a modest giant who accomplished many things for the good of his country. He continually sought opportunities to serve, listened well, led well, and helped others, both as individuals and through organizations. He is greatly missed.

Rube is survived by his wife, Donna, and two sons, Matthew and Daniel, a grandson Jeffrey, two sisters Elsie and Irene, and many nephews and nieces.

Next: Alan S. Michaels »
Memorial Tributes: Volume 12 Get This Book
×