Get This Book
Visit NAP.edu/10766 to get more information about this book, to buy it in print, or to download it as a free PDF.
« Previous: Ronald Samuel Rivlin
Page 240 Share Cite
Suggested Citation:"George A. Samara." National Academy of Engineering. 2008. Memorial Tributes: Volume 12. Washington, DC: The National Academies Press. doi: 10.17226/12473.
× 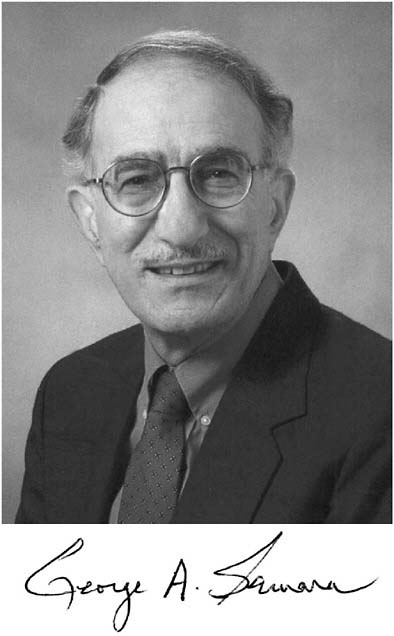 “For contributions to the understanding of dielectric, ferroelectric, and ferromagnetic materials applications.”

AT THE END of last year, the scientific community lost a dear friend and colleague. George Samara died on December 30, 2006. George was an internationally recognized scientist on the use of high pressure for fundamental studies of electronic and structural properties of solid state materials. There were, however, several other sides to George’s life. These involved his scientific contributions to other areas, his administrative skills in management, and finally his personal life. Those of us who had the privilege of working closely with him in any of these endeavors will profoundly miss his quiet leadership, integrity, humility, and willingness to stand up for what he believed in.

Although George was born on December 5, 1936, in the small farming community of Jdeidet Marjayoun in southern Lebanon, his father was a United States citizen. He came to the United States as a 16-year-old, completed high school in Drumright, Oklahoma, and graduated from the University of Oklahoma with a B.S. in chemical engineering in 1958. He earned a doctorate in chemical engineering in 1962 from the University of Illinois at Urbana. This was under the direction of Professor Harry Drickamer, who was a hard task-master. His thesis work as well as continued collaborations with Drickamer covered a wide range of materials. These included pressure effects on the resistance of metalloids, simple fcc and bcc, II-VI,

III-V compounds to more exotic fused-ring aromatics. This collaboration with Drickamer continued into the 1970s. Later, other coauthors also enjoyed such long enduring relationships, several extending over two and three decades. Many of these involved research topics resulting from informal questions and/or discussions at scientific meetings. Even though a list of coauthors exceeds 70, George was also the single author of nearly 100 journal papers and topical reviews.

Upon completing his degree at Illinois in 1962, he joined Sandia National Laboratories, but immediately fulfilled his military duty, spending the next two years as an ROTC officer at the Institute of Exploratory Research for the U. S. Army Electronics Laboratory at Fort Monmouth, New Jersey. There, he was able to continue research involving pressure effects on solids, including the pressure homogeneity of the sample in the pressure apparatus, and developed various techniques to measure the physical properties under pressure, such as compressibilities, electrical conductivities, dielectric constants, and Curie points. This effort was with Armando Giardini and others at Fort Monmouth. Also included was a paper in the area of what became of major importance to not only the entire worldwide research field but also his personal research, as well as to Sandia–ferroelectrics. George’s contributions to various aspects of ferroelectrics continued throughout his research career.

Returning to Sandia, George began and continued an active personal research effort which spanned 45 years on many areas besides ferroelectrics up to the final days of his life. Among such pending studies when he passed away were promising new ferroelectric materials based on lead lanthanum zirconate titanate and on terpolymers of vinylidene fluoride with other fluoroethylenes. George’s numerous scientific papers included pioneering work on structural phase transformations, semiconductor physics, ferroelectrics, ferroelectric polymers, nanosized semiconductor clusters, defects, deep electronic levels, relaxation in crystalline solids and polymers, ionic transport, ceramics, photovoltaics, and MBE and CVD synthesis and processing. Among the invited reviews are three chapters in Solid State Physics: “The Study of Soft Mode Transitions at

In 1974, George was awarded the Ipatieff Prize (for scientists under the age of 40) of the American Chemical Society. In 1986, he was elected to the National Academy of Engineering. As an active member of the academy, he served on the Section 9 Peer Committee (2001-2003) and organized the regional meeting in Albuquerque (May 19, 2005) on Solid State Lighting: The Next Revolution in Lighting. He was a fellow member of the American Physical Society and the American Association for the Advancement of Science. His activities also included editorial or advisory boards for Ferroelectrics, Reviews of Scientific Instruments, Journal of Physics and Chemistry of Solids, and the Materials Research Society’s Journal of Material Research.

Those of us who were familiar with George’s unusually accomplished research career as well as his extraordinary organizational ability to develop a host of national and international materials research activities might also realize he possessed excellent management skills. At Sandia National Laboratory, he was initially promoted in 1967 and served in various management capacities involving oversight of research in condensed-matter physics, electronic materials and phenomena, chemistry research activities, advanced materials and nanoscience.

During George’s long and distinguished career at Sandia, he recruited the most promising young scientists in the country, and then nominated them for invited talks, honors, and awards, promoting their career development. His interaction and support of these and other collaborating scientists led to worldwide recognition of excellence for various individuals and groups. He also served as a resource, sounding board, and mentor for generations of Sandians, many of whom came to occupy significant leadership positions both at Sandia or elsewhere. George had a unique combination of deep scientific understanding and insight, foresight, friendliness, and personal and organizational leadership abilities. He was widely recognized for his high professional, ethical, and scientific standards that have inspired all who had contact with him.

In addition to overseeing management of these research activities, George took on additional management responsibilities. During the last 13 years of his career, he served as manager of Sandia Laboratory’s Department of Energy (DOE) Basic Energy Sciences core research programs in materials science. He was largely responsible for developing the concept for the DOE Center of Excellence for the Synthesis and Processing of Advanced Materials, a coordinated, cooperative venture among 12 national laboratories and several industrial and university partners, and he served as its director. In recent years, he was instrumental in developing the joint Sandia/Los Alamos Center for Integrated Nanotechnologies (CINT), one of five DOE Nanoscale Science Research Centers. In these efforts, he earned the admiration and respect from his colleagues at the other national laboratories and the materials research community for his unbiased even-handed coordination and leadership. Based on his technical management and leadership, George was awarded the American Chemical Society’s Earle B. Barnes Award for Leadership in Chemical Management in 2000.

Finally, a few comments on his personal life, for amazing as his technical accomplishments were, George was much broader—a man for all seasons. In his younger days, he hiked the local New Mexico mountains as well as the midrange of the

Sierra Nevada’s in California with various colleagues. He was a respectful opponent in tennis. He visited Lebanon through the years; there he met and married his wife, Helen. Those who lived in or visited Albuquerque enjoyed the Lebanese hospitality and food at their home. Fresh grapes, apricots, and particularly two varieties of figs were provided from his back yard. He enjoyed gardening, the arts, particularly music, and even wrote poetry for his church congregation. A loving and devoted husband and father, George leaves his wife Helen, daughter Victoria, son Michael, brother Emile, and sister Leila. Since George’s passing, many have noted that he will not just be remembered for his accomplishments, of which there were many. More importantly, he will be remembered for the way he connected with other people, the generosity of his heart, his willingness to always be open to others, and his constant optimism. He was a brilliant scientist, a good citizen, mentor, and teacher. As Helen said, George was a gift to us all. He will be sorely missed.

Next: Reuben Samuels »
Memorial Tributes: Volume 12 Get This Book
×