Get This Book
Visit NAP.edu/10766 to get more information about this book, to buy it in print, or to download it as a free PDF.
« Previous: A. Richard Newton
Page 222 Share Cite
Suggested Citation:"Charles Noble." National Academy of Engineering. 2008. Memorial Tributes: Volume 12. Washington, DC: The National Academies Press. doi: 10.17226/12473.
× 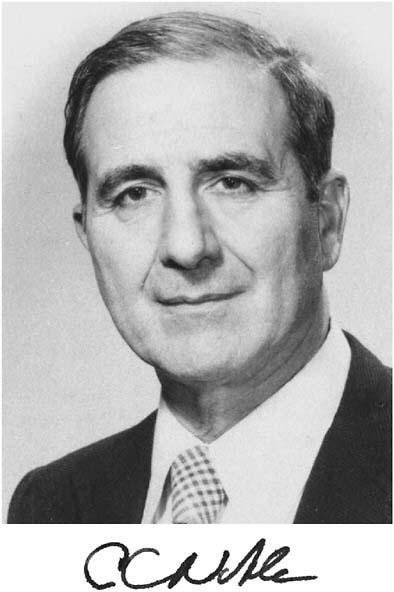 “For productive leadership in the control and development of the nation’s largest rivers, involving new concepts for effecting optimum utilization.”

BY THE CHARLES NOBLE FAMILY

CHARLES “CHUCK” NOBLE was born in Syracuse, New York, to Italian immigrant parents. His father, Anthony, initially worked in the Pennsylvania coal mines, but, after years of self-instruction, he taught himself to be an auto mechanic. Chuck inherited his dad’s love of education and excelled in school, where his economics professor at North High School in Syracuse recommended that he pursue an academic career at West Point. At the time Chuck thought West Point was only for rich kids, but months later he saw an advertisement in the newspaper, “Join the Army and go to West Point,” and he began actively exploring this opportunity.

After high school graduation, Chuck enrolled in the Army Preparatory School at Fort Totten for the purpose of competing for an appointment to West Point. After serving a year as a private assigned to the 26th Infantry Barracks, Plattsburg, NewYork, he won appointments to both the military and naval academies. He decided on West Point and enrolled on July 1, 1936, thus achieving his dream.

With World War II looming, Chuck’s assignments and responsibilities changed rapidly. His graduation leave was cut short, and he was made platoon and troop commander of A Troop, 8th Engineer Squadron, 1st Cavalry Division, for maneuvers in Louisiana and North Carolina. Next he served as tactical officer, company commander, and battalion commander in the rapidly expanding Officer Candidate Regiment at Fort Belvoir, Virginia. After he was shipped overseas, Chuck commanded the 1271st Engineer Battalion in the Ardennes-Alsace, Rhineland, and Central Europe campaigns. He also commanded the 288th Engineer Battalion with the Occupation Forces.

After the war, Chuck joined the Manhattan Project as the executive officer at Oak Ridge, Tennessee, and liaison officer to the newly established Atomic Energy Commission. In 1948, he earned a master’s degree in civil engineering from Massachusetts Institute of Technology and was elected to Sigma Xi. His subsequent assignment was to the War Department General Staff in the Pentagon as plans officer in charge of the atomic desk, which rapidly expanded to a key role in planning the defense of Western Europe. Upon the establishment of the North Atlantic Treaty Organization, Chuck was selected a member of the small American advance party at the new SHAPE headquarters in Paris, France. He served there under General Eisenhower in the Plans and Operations Division and the Office of the Special Assistant to the Chief of Staff, General Cortland Schuyler.

In 1954, Chuck returned to the United States, where he was made deputy district engineer of the New York Engineer District. He subsequently attended the Army War College, after which he took command of the 151st Engineer Combat Group at Fort Benning, with a follow-on assignment as district engineer in Louisville, Kentucky. From 1960 to 1963, he directed the Atlas and Minuteman ICBM Base Construction Program, then was assigned to the National War College, where he earned a master’s degree in international affairs from George Washington University.

As a brigadier general, he served as engineer, Eighth Army, in Korea, and later returned to Washington, D.C., as program director for Southeast Asia construction in the Office of the Secretary of Defense. Next he was director of civil works in the Office of the Chief of Engineers at the Pentagon, where he also served as president of the Coastal Engineering Research Board and chief engineer of the Presidential Atlantic-Pacific Interoceanic Sea Level Canal Study Commission.

As a major general, Chuck was chief engineer for the U.S. Army, Europe; in 1970, he became commanding general of the Engineer Command in the Republic of Viet Nam. In 1971, President Nixon appointed him president of the Mississippi River Commission, with additional duties as chairman of the Red River Compact Commission and member of the Board of Engineers for Rivers and Harbors. He retired from active duty in 1974.

Chuck then joined the Charles T. Main Engineering Company in Boston, where he managed engineering projects in Argentina, Uruguay, Canada, Nigeria, Panama, Saudi Arabia, Java, Indonesia, and Kuwait. He retired from the company in 1984 as president and chief executive officer.

Chuck was a registered professional engineer in eight states and the District of Columbia and a recipient of the Wheeler Medal for most outstanding engineer in America. During his tour of service in the U.S. Army, he received three Legions of Merit and three Distinguished Service Medals, among other awards. In 1981, he was elected to the National Academy of Engineering for his lifetime contributions to engineering in the United States. He is also listed in Engineers of Distinction, Who’s Who in Engineering, and Who’s Who in America.

Chuck married Edith Lane just prior to World War II, and the couple had five girls, three boys, 12 grandchildren, and four great grandchildren. Chuck was a devoted father and grandfather who imparted to his family his sense of values, a strong work ethic, and a sense of security. He participated in everything at home, including helping with housework and preparing Thanksgiving and Christmas dinners. Education

was his top priority, and he provided college tuition for every grandchild and great-grandchild.

Chuck had a wonderful sense of humor and a caring, optimistic spirit that encouraged everyone to do their best on every project. He treated his subordinates with dignity and respect and was always considerate of others and looked after the little guy.

Family dominated his hobbies and interests. Over a period of 10 years he built and expanded a camp in the Adirondack Mountains, which ultimately had six bedrooms that could accommodate his children and grandchildren, so the family could all vacation together. An early riser all his life, he would always have a roaring fire and homemade waffles ready for the grandchildren when they awoke in the morning. At night he would make spaghetti with his own canned tomato sauce. An avid gardener, he grew his plants from seed and drew detailed sketches of his elaborate gardens. He liked to read in the evening, usually a biography, a medical journal, or a book of ancient history.

Chuck Noble lived out the American dream, rising from modest boyhood circumstances to become one of the most accomplished engineers in the United States. Nevertheless, he remained humble throughout his life. He loved serving his country and was thankful he was able to play a minor role in its development. In his eyes, the door to opportunity opened with his admission to West Point. He loved his alma mater and was steadfastly grateful to the academy for preparing him to face a challenging future with honor, distinction, integrity, and love of country.

Next: Frederic C.E. Oder »
Memorial Tributes: Volume 12 Get This Book
×