Get This Book
Visit NAP.edu/10766 to get more information about this book, to buy it in print, or to download it as a free PDF.
« Previous: Alan F. Shugart
Page 278 Share Cite
Suggested Citation:"John Wistar Simpson." National Academy of Engineering. 2008. Memorial Tributes: Volume 12. Washington, DC: The National Academies Press. doi: 10.17226/12473.
× 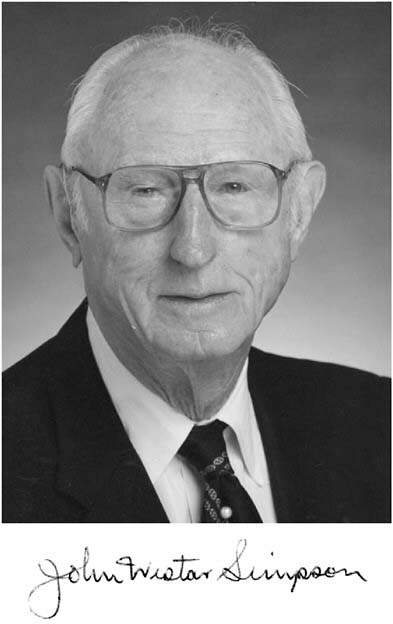 JOHN SIMPSON, a pioneer in the application of nuclear energy to naval propulsion, electric-power generation, and space propulsion, died on January 4, 2007, at the age of 92. He was elected to NAE in 1966, just two years after its creation. He joined Westinghouse Electric Corporation as a junior engineer in 1937 and retired as executive vice president and president of the Power Systems Company, one of its four main groups, in 1977. He remained active in business, professional, and community affairs until his death.

John Wistar Simpson was born in Glenn Springs, South Carolina, on September 25, 1914, to Richard and Mary Randolph Spotswood Berkeley Simpson. As a boy and young man he was fascinated with both science and the military. In 1932, he attended Wofford College in Spartanburg, South Carolina. At the same time, he applied for an appointment to the U.S. Naval Academy. In 1933, he enlisted in the Marines and had just completed basic training when he was accepted to Annapolis. He graduated from the Naval Academy in 1937, but was denied a commission because of poor eyesight.

In that same year, John joined Westinghouse Electric Corporation at its East Pittsburgh plant and worked in the switch-gear division. He also began studies at the University of Pittsburgh, which led to an M.S. in electrical engineering in 1941. In the naval buildup leading to U.S. participation in World War

II, he was assigned to switchboards and other electrical gear for U.S. Navy ships; he became the manager of this unit in 1944.

In 1939, he had started to work with Cmdr. (later Adm. in 1953) Rickover (USNA 1922), who was in charge of electrical procurement for the U.S. Navy, Bureau of Ships. Their challenge was to design and manufacture electrical gear that could withstand battle shocks and damages in a wartime environment. At one point, John was so eager to join the fray that he enlisted in the U.S. Army, but Rickover blocked his application, telling him that the United States needed to win the war at sea more than it needed one more hero. The proof was in the pudding. Days after the war ended, John was sent to Japan as a member of the Navy Technical Mission, to assess the Japanese war effort.

In 1946, when then Capt. Rickover was assigned to Oak Ridge National Laboratory in Tennessee to study the application of nuclear energy, Westinghouse granted Simpson a two-year leave of absence to join Monsanto and Rickover’s group. After pursuit of the Daniels pile, a gas-cooled reactor, ended in a blind alley, Rickover seized on the concept of pressurized water and established industrial efforts at General Electric (GE) and Westinghouse to support Argonne National Laboratory, which was to develop the reactor.

The Atomic Power Division at Westinghouse was formed at the end of 1948, and John was named assistant manager of engineering in 1949. The division was located at the former Bettis Airfield, just south of Pittsburgh. John became technical director in 1952 and laboratory director in 1955.

Under his leadership, the group at Bettis developed the first pressurized-water reactor (PWR), which was installed in the Nautilus submarine that went to sea in 1955. The group also designed PWRs for use in surface ships, including aircraft carriers, cruisers, and destroyers. After Adm. Rickover had convinced the Atomic Energy Commission (AEC) to support development of a large reactor, the PWR was adapted for use in a commercial power station.

John was project manager for the Shippingport Power Station, just north of Pittsburgh, which was built as a joint project with Duquesne Light. Shippingport, the first full-

scale commercial nuclear-power station in the world, began operation in 1957 and was decommissioned in 1982. President Eisenhower broke ground for the facility in 1954 by remote control.

In 1952, Westinghouse established its Commercial Atomic Power Activity (CAPA) in Pittsburgh. Adm. Rickover worked hard to retain his technical staff at Bettis, and Westinghouse began with just a few Bettis alumni, supplementing where they could with outside hires. In 1959, against Rickover’s wishes, John moved within Westinghouse to pursue the use of nuclear power in space. As a result of his departure, Bettis transferred some of its operations to GE at Knolls Atomic Power Laboratory, near Schenectady. Eventually, GE developed the boiling-water reactor, which became the chief competitor of the Westinghouse PWR in the commercial market.

When Simpson took up the challenge of space propulsion, it appeared to be as promising as naval nuclear power. Westinghouse established the Astronuclear Laboratory in Pittsburgh under Dr. Sidney Krasik and several who had worked at Bettis. Their big opportunity came in 1961, when the AEC and NASA announced an industrial competition to design and build a nuclear-propulsion device powered by a reactor based on the Los Alamos KIWI design (NERVA, a nuclear engine for rocket vehicle applications).

Westinghouse, a dark horse, split the contract with Aerojet General. The project soon involved several thousand people and tests of six live reactors, including a breadboard engine, in the Nevada desert. Despite its technical success, however, NERVA was canceled in 1972 for lack of a compelling mission, when near-Earth missions were abandoned for fear of nuclear contamination.

When John left Bettis, he was made vice president in charge of both the Astronuclear Laboratory and the fledgling Commercial Atomic Power Activity. The latter, which was completely outside Admiral Rickover’s aegis, had won several small contracts—one for a small PWR (11MWe), to be located in Brussels, to power the World’s Fair in 1959. After objections were raised to an urban location, the reactor was built in a rural area, where it operated successfully for many years.

The first truly commercial Westinghouse PWR was Yankee Rowe (185MWe), which followed closely on the 1954 revised Atomic Energy Act (signed by President Eisenhower as the Atoms for Peace Act). The contract was signed in 1956, and the plant went into operation in 1960, essentially on schedule and within budget. In many ways, Yankee Rowe was a prototype of the majority of the 435 nuclear-power reactors operating in the world today.

CAPA was licensor to FIAT in Italy, Schneider in France, Siemens in Germany, ACEC in Belgium, and Mitsubishi in Japan. Thus Westinghouse technology became widely dispersed. In France, Framatome, the company set up by Schneider and Westinghouse, eventually built the 53 reactors that supply 90 percent of France’s electricity. Framatome’s successor, Areva, is a major factor in the world market today.

When John took charge of CAPA and Astronuclear in July 1959, the former faced enormous technical and managerial challenges. It was John’s leadership and drive that made the remarkable surge in nuclear power during the 1960s and 1970s possible. In 1962, he put in a brief stint as corporate vice president for engineering and research, before being appointed vice president for the Electric Utility Group (EUG). From this time until his retirement in 1977, as head of EUG and later as president of the Power Systems Company of Westinghouse, he oversaw the sale of 53 large Westinghouse nuclear plants in the United States and 42 overseas. In addition, licensees sold 83 plants, which brought in substantial royalties until 1992.

Known as a hands-on manager, John personally conducted technical and business reviews. He believed in personal relationships with key customers, government officials, and licensee managers and their customers and governments. For example, the negotiations that transformed the program in France were excruciating. Some parties in France wanted to develop their own design, many wanted to split the business between the Westinghouse PWR and GE’s boiling-water reactor, and no one wanted Westinghouse to retain its 45 percent ownership of Framatome or to pay the billion dollars

in royalties. John presided over the negotiations, which resulted in an all PWR program, as well as a cooperative R&D program between Westinghouse and the interested technical operations in France. Westinghouse sacrificed it ownership share but retained the royalties. Westinghouse engineers are still proud of their role in helping the French assume the position they hold today in nuclear energy.

During this time, John was a leader in the liquid-metal fast-breeder reactor program, winning contracts for both the Fast Flux Test Facility at Hanford (1968) and the Clinch River Breeder Reactor (1972). The former operated successfully from 1982 to 1993; the latter was canceled during the Reagan administration after design was completed and site preparation had begun. However, as of 2007, the U.S. Department of Energy began funding studies for reviving some of these programs under its Global Nuclear Energy Program.

Westinghouse had a “step-down” program for senior executives beginning at age 60, which John reached in 1974. Against his better instincts, he became a corporate consultant, but this did not allow him to pursue his many other interests. He retired from Westinghouse in 1977 but remained active in the field as a principal in International Energy Associates.

After retirement, Simpson and his wife, Esther, whom he met when both were working at Oak Ridge and married in

1948, retired to Hilton Head Island, South Carolina. They had acquired a beach-front home in 1966 and the family spent many happy years vacationing there before he and Esther became full-time residents of the Sea Pines development in 1980. In the mid-1980s he became a founding director of Sea Pines Associates and he’s credited with organizing the homeowners in Sea Pines to purchase the resort and save it from failing and going into bankruptcy.

Simpson remained active throughout the next 20+ years, traveling extensively with Esther and entertaining friends and family in Hilton Head. He was deeply involved in the First Presbyterian Church both in Pittsburgh and on Hilton Head. In addition to his affiliations with many educational institutions and professional organizations, Simpson served on the board of the National Council of Churches. He maintained close ties with Pittsburgh too, keeping memberships at various clubs there, such as the Duquesne Club, the University Club, Laurel Valley Country Club, Rolling Rock Club, and others. He also belonged to Farmington Country Club in Charlottesville, Virginia, and Bear Creek Golf Club on Hilton Head. He loved golf, bridge, snow skiing, hunting, deep-sea fishing, fine wines, good friends, and debating on a myriad of topics.

Never one to rest and relax, he authored two books and continued to consult on nuclear matters with a number of different colleagues. “My father was especially proud of his membership in the National Academy of Engineering,” said his daughter, Patricia Deely. “Even at 92, he dressed in a shirt and tie and always wore his NAE lapel pin on his jacket.”

Next: Robert M. Sneider »
Memorial Tributes: Volume 12 Get This Book
×