Get This Book
Visit NAP.edu/10766 to get more information about this book, to buy it in print, or to download it as a free PDF.
« Previous: J. Edward White
Page 348 Share Cite
Suggested Citation:"Dean E. Wooldridge." National Academy of Engineering. 2008. Memorial Tributes: Volume 12. Washington, DC: The National Academies Press. doi: 10.17226/12473.
× 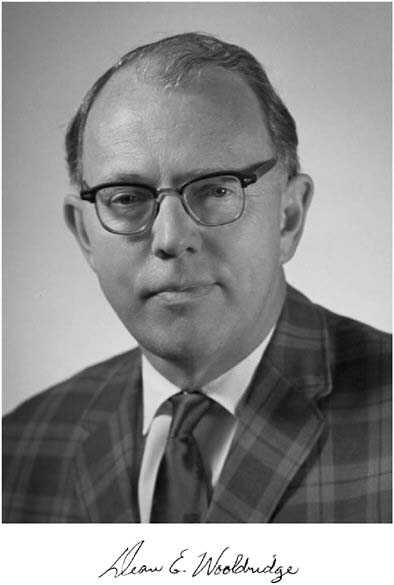 “For contributions to physical electronics, analog computers and the management of research and development.”

Wooldridge and his long-time business partner, Simon Ramo (NAE and NAS), founded Ramo-Wooldridge Corporation with two administrative employees and two telephones. Within a week of its formation, the company was chosen to lead the development of the intercontinental ballistic missile (ICBM) programs for the U.S. Air Force. That initial contract led to several major divisions of Northrop Grumman that employ tens of thousands of engineers, who are still working on applications of advanced technology to address military needs.

Dean Wooldridge was born in Chickasha, Oklahoma, on May 30, 1913. His brilliance was apparent early on, and he graduated from high school at the age of 14. After waiting to reach the minimum age requirement, he attended the University of Oklahoma, where he received his B.S. and M.S. in physics in

Wooldridge was always a “quick study.” Simon Ramo commented that when he saw Wooldridge perform in their first class at Caltech, he was no longer surprised at how young Dean was when he received his M.S., but rather wondered what had taken him so long. He supposed it was because Wooldridge had toyed with several majors, including law, before he settled on physics. Wooldridge was not slow socially either. He married Helene Detweiler when he graduated Caltech in 1936.

Beginning with their meeting in that first class at Caltech, Wooldridge and Ramo began a friendship, and later a partnership, that delivered much to our national defense. However, after graduation from Caltech, their friendship remained personal, rather than professional. Wooldridge went to Bell Labs, where he became an acknowledged expert in electromagnetic theory, essential to the enormous surge in new technologies during World War II. He led a group at Bell Labs that developed the first airborne computers. At the same time, Ramo went to work for General Electric (GE) in New York, where he too contributed significantly to technological advances that supported the military during the war.

During the war, Woodridge went to Europe to instruct bombardiers on how to use the computers. He traveled via South America and Africa to avoid the possibility of anti-aircraft from ships in the North Atlantic. The family at home traced his trip on a National Geographic map of the world.

When the war ended, most of the country was ready to get back to normal as quickly as possible. Both GE and AT&T wanted to get back to their commercial customers, who had been sidetracked first by the Depression and then the war. However, Ramo saw a future in the defense establishment, which was facing new problems, even during demobilization. The Soviet Union had already begun to pursue its interests, with the help of the still large Red Army. More important, Ramo foresaw that the Soviet Union would develop an atomic bomb sooner rather than later and that the defense of the United

States would depend on radars, aircraft, and guided missiles to keep Soviet aircraft from delivering those weapons.

These were all new challenges for the United States, and Ramo and Wooldridge decided to address them rather than devote their energies to commercial pursuits. Ramo joined the Hughes Aircraft Company in the spring of 1946, and Wooldridge followed that fall, to work on early contracts and continue to gather new ones. Within five years they had built what became Hughes Electronics, the largest concentration of engineers and scientists in the United States working exclusively on defense programs. As predicted, the programs were focused on airborne radar, computers, and guided missiles for fighter aircraft that could intercept long-range bombers. Every U.S. interceptor aircraft was filled with products developed and produced by Hughes Electronics.

Several factors contributed to the buildup of Hughes, including that the military had large balances of funds that had been appropriated by Congress when it was anticipated that the war would last longer. Reluctant to give money back, the military pushed to fund new programs before the fiscal year ended in June 1946. Thus proposals for R&D in new areas were readily funded.

Gathering talented scientists and engineers was also facilitated by the many California-trained professionals who had been uprooted during the war and wanted to come home. That influx, coupled with the notion that engineers could work in offices instead of the large “bull pens” common in aircraft companies, made it relatively easy to attract new workers. Many of them had good ideas for proposals of their own, and the company grew rapidly.

About three years later, just as the partners had foreseen, President Truman announced that the Soviet Union had tested an atomic bomb. Like today, however, the media were focused more on celebrities than defense, at least on that day. The headlines on that historic day were about Rita Hayworth’s elopement with Aga Khan. The announcement of the Soviet atomic bomb had a strong impact on Hughes Electronics, however, which grew even faster after that.

Many stories have been written about working for Howard Hughes and his personality quirks. Although Wooldridge and Ramo did not see him often (almost never during the first years of the growth of this unique new business), their relationship with him was affected by one of his quirks, namely that he was hard of hearing. Hughes had trouble understanding the soft-spoken Wooldridge unless he shouted, which caused him to make facial movements that led Hughes to believe he was angry. To avoid problems, Ramo did most of the talking when they were with Hughes.

After about seven years of increasing conflict between the rapidly growing electronics division of his empire and the traditional Hughes Company, the partners decided to leave Hughes. The decision was triggered when Hughes wanted the electronics enterprise to move to Las Vegas, where he had just made very large investments in land. The difficult discussions about leaving led to one major benefit. Ramo succeeded in convincing Hughes that the electronics enterprise had to be independent of other Hughes holdings. As a result Hughes created the Hughes Medical Foundation earlier than he had planned and donated all of the stock of the Hughes Aircraft Company, which was in effect the electronics company, to the foundation. The Hughes Medical Foundation continues to invest these large funds in promising areas of medical research.

After a final meeting with Hughes on a Saturday, the partners formed the Ramo-Wooldridge Corporation on Monday. Their office in an old barber shop included two assistants and two telephones. The telephones were very busy that Monday, and in the afternoon an Air Force officer, who had been unable to get through by phone, arrived to tell them the secretary of the Air Force was anxious to speak with them. That contact led to an immediate trip, first to New York to complete the formation of the company and obtain initial financial backing from the Thompson Products Company, and later in the week to meetings in Washington where the Air Force selected the new firm to perform the analysis and then the management of a high-priority presidential program to develop ICBMs.

Obviously government contracting was more flexible in those days than it is today. That contract quickly grew, and many engineers wanted to join the new enterprise, so hiring was not a problem.

For the rest of the decade, the company grew rapidly, until three major changes were made starting in 1958—Thompson took advantage of an opportunity to merge with the new company, which became TRW; Wooldridge became president of TRW; and the company spun off the resources doing advanced planning for the Air Force into a new company, Aerospace Corporation. This change allowed TRW to compete for programs to develop and build satellites for the Air Force without a conflict of interest. In fact, in 1958 TRW became the first corporation to build and launch a spacecraft, Pioneer 1. A later spacecraft, Pioneer 10, which was the first to leave the solar system, transmitted data back to Earth for more than 30 years.

Wooldridge continued as top executive of TRW for about three years, but in 1962 he retired and moved to Santa Barbara. He continued a relationship with Caltech, including engaging in research on brain function and neurology. He wrote two books on those subjects that are widely used in postgraduate courses. He and his wife also traveled extensively. In 1982, he retired from Caltech.

Wooldridge’s wife, Helene Detweiler Wooldridge, passed away in 2001. He is survived by three children, Dean E. Wooldridge Jr., Anna Lou Eklof, and James A Wooldridge, and three grandchildren, Michael Andrew, Jonathan David, and Lisa Michelle Wooldridge.know for sure they owned the house there in 1964.

Next: Leo Young »
Memorial Tributes: Volume 12 Get This Book
×