Get This Book
Visit NAP.edu/10766 to get more information about this book, to buy it in print, or to download it as a free PDF.
« Previous: George B. Dantzig
Page 108 Share Cite
Suggested Citation:"John Larry Duda." National Academy of Engineering. 2008. Memorial Tributes: Volume 12. Washington, DC: The National Academies Press. doi: 10.17226/12473.
× 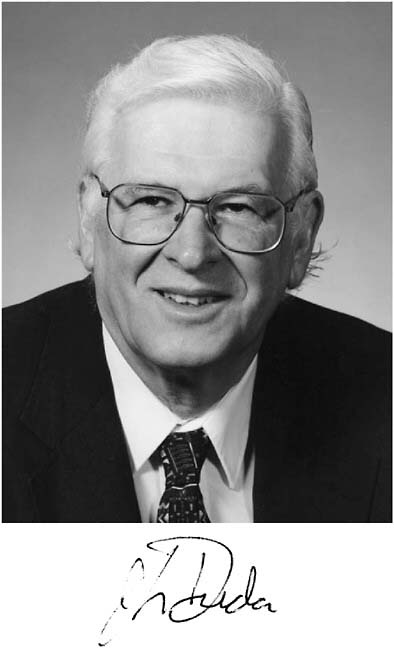 “For research on molecular transport in polymers and on tribology, and for leadership in engineering education.”

Born in the steel-mill town of Donora, Pennsylvania, Larry was fond of noting that if a member of his family attended college, he did so thanks to a football scholarship, but he didn’t make the team. Thus forced to pursue an academic path, he succeeded in getting a different kind of scholarship to Case Institute of Technology, where, influenced by his high school chemistry teacher, he elected to pursue the chemical engineering curriculum. He received his B.S. in 1958 and then his M.S (in 1961) and Ph.D. (in 1963) from the University of Delaware. In 1962, while still a student, he married Margaret Kathleen Barbalich, who remained his constant companion for the next 44 years.

After completing his formal education, Larry spent eight years with the Process Fundamentals Group of the Dow Chemical Company in Midland, Michigan, where he began a long and successful collaboration with Dr. James S. Vrentas. Their analyses of the transport properties in polymeric systems

led to the development of the highly successful Vrentas-Duda free-volume theory that explains how the viscous behavior of polymer melts is coupled to the diffusional behavior in binary solutions. During this same period, Larry was granted a patent for a latent heat storage component in insulation to prevent the Alaska pipeline from melting the permafrost in summer.

In 1971, when Larry accepted a position as an associate professor of chemical engineering at Penn State, he began a long and remarkable academic career. In 1975, he was promoted to professor, and during 1978–1979, was a visiting professor at the National Taiwan University. For 17 years, he served as department head, retiring from that position in 2000. From 1990 until his death in 2006, he was co-director of the Center for the Study of Polymer-Solvent Systems. Unlike most administrators, however, he continued to teach courses and maintain a strong focus on his research and his students.

Working with his longtime colleague Jim Vrentas, he extended the free-volume theory and developed experimental techniques and methods of analysis to determine accurate diffusivity data over the wide range of temperatures and concentrations in polymer processing. Larry also developed a micro-reactor technique to study the thermal and oxidative degradation of lubricants under conditions that simulate many engine environments. In the course of his career, he published nearly 200 articles in refereed journals, 45 refereed proceedings, and 18 chapters in books.

Undoubtedly, he most enjoyed working with students. He collaborated with 70 master’s degree students, 45 doctoral students, and innumerable undergraduates in the classroom and the research lab. Larry was not the kind of advisor who would send his students off on their own. He worked closely with them, pointing out possibilities, challenging them, and molding their attitudes and approaches to research. The results of his mentoring are apparent in the success of many of his students in industry and academia.

Larry’s peers honored him with many awards. In 1981, the American Institute of Chemical Engineers presented the William H. Walker Award to Larry and Jim Vrentas for

Larry contributed to his profession in many ways. He served on the Governing Board and Executive Committee of the Council for Chemical Research and was a director of AIChE and the Materials and Science Division of AIChE.

Afflicted with dyslexia, a condition that wasn’t diagnosed until he was in his mid-forties, Larry approached his academic and research challenges with determination and good humor. In the classroom, he asked his students to point out his misspellings, inaccuracies, and reversals, and when they did, he laughed along with them.

Everyone who knew Larry soon learned that, although he was a dedicated scientist, he was far from the stereotypical nerd. In fact, he was a true “renaissance man” with interests in all kinds of science, engineering, religion, sports, music, art, travel, family life, nature, and more. He was always a teacher, in and out of the classroom. When asked why he didn’t retire and simply pursue his research, his answer was always the same, “I love to teach.” An eternal optimist, Larry was always sure a solution could be found to any and all problems.

Larry was also a devoted family man. He and Margaret had

four children and seven grandchildren in whom they took great pride. The children are now a pediatrician, a neurologist, a fine-art photographer, and a businessman. Larry was instrumental in starting a Boy Scout troop in State College, Pennsylvania, and all three of his sons achieved the rank of Eagle Scout. There was a special synergy between Larry and Margaret in their professions. Larry was a source of constant support and encouragement to Margaret in her successful career as a professional writer and photographer, and she always supported him wherever his job, eccentricities, or travels took him.

Even when he was close to death, Larry never lost his sense of purpose or stopped searching for insights. His outlook on life and death is summarized in one of his favorite quotes from Rev. Donald Moore of Fordham University: “I see death not only as an opportunity to reflect on the meaning of your own existence, but to offer your life as a gift to others. The end presents us with a time to ponder—and discuss, if possible—what life has meant and might continue to mean for others.”

Most of the people who made Larry’s acquaintance quickly discovered that he loved to talk and tell stories and his sense of humor is remembered all over the world. He also loved to listen to others and liked nothing more than a good philosophical discussion. Many people were drawn to Larry, but few people knew him the way his family did.

I remember meeting Larry at a lecture on Dr. Zhivago when he was taking technical Russian and I was struggling with regular Russian. Larry used to joke that the only thing he got out of Russian was a wife and a name for his daughter, but not many people knew that when he was young, Larry dreamt of being a novelist. That certainly explained the constant

encouragement he gave me in my own writing and his lifelong love of reading despite the fact that he was dyslexic. Later in life, Larry limited himself to reading nonfiction, especially in the areas of history and comparative religion. Many of the entries in his now-famous book of quotes came from those late-night forays into the minds of others.

When Larry and I met, I wanted to be an editor and a writer in New York with an apartment overlooking Central Park. Larry wanted to homestead in Alaska. We fell in love despite these differences, and 44 years later, we still shared that love even though neither of us ever lived in those places. Larry did work on the Alaskan pipeline project for Dow and visited Alaska often, and I sold my writings and photographs through agencies in New York, but home was Penn State for 37 years. Together, we traveled to more than 40 countries, exploring sites of scientific discovery and sites of literary merit, food markets and art museums, local customs and native crafts. After each adventure, however, we were always happy to return to Happy Valley.

At home, Larry read in the evenings as he listened to music on his favorite discs. He loved classical, folk, jazz, and even country music if it told a good story. Our four children remember how he often “conducted” some famous classical piece with hair flying and arms flailing at the crescendos. The children, his orchestra, played with equal gusto on the pretend instruments they’d been assigned. When our daughter Laura applied to medical school and was asked for a favorite childhood memory, she mentioned this, and the interviewer said: “How fortunate that all of you children played instruments.” She laughed and said: “Well, not exactly.”

Long strolls in the woods with the children and grandchildren were always treasured as Larry loved nature and taught as he walked along, taking his lesson plans from nature. A tree growing in an unusual way, a bird call he was sure to recognize, a crawling caterpillar, or a chipmunk rustling in the leaves would all prompt insights. If the grandchildren asked politely, they could often persuade him to show off his almost-perfect crow call, which he once used at an international dinner meeting.

Larry also loved walking to work every day to keep a close eye on the campus trees and plants.

One thing that everyone in our family remembers about Larry was his uncanny ability to look down into a field of grass anywhere in the world and find four leaf clovers. We remembered this when he was dying as he kept reiterating that he felt he was one of the luckiest men to ever walk the face of the earth. But we felt and still feel that we are the fortunate ones to have been able to share his life’s journey.

Next: Maxim A. Faget »
Memorial Tributes: Volume 12 Get This Book
×