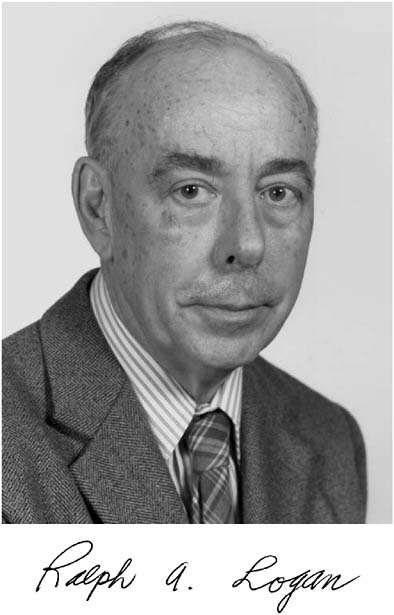 “For contributions to the development of solid-state lasers.”

RALPH LOGAN, retired distinguished member of the technical staff at AT&T Bell Laboratories, played a seminal role in the early development of fundamental semiconductor technologies. He died on December 1, 2006, at the age of 80.

Ralph was born in the very small village of Mille Roches, Ontario, Canada (the village was submerged when the St. Lawrence Seaway was constructed). His mother, Lucy, one of 17 siblings, was an immigrant from Birmingham, England. His father, Joseph Alexander (Alec), from a large close-knit French-speaking farming family in Howick, Quebec, was a Canadian National Railroad agent. For the first few years of his schooling, in Greenfield, Ontario, Ralph attended a one-room schoolhouse. In later years, he liked to claim he was the smartest kid in the class … and then admit he was also the only kid in his class. When the family moved to Alexandria, Ontario, Ralph thrived in the seventh and eighth grades where he competed with other students and where his aptitude for mathematics became evident. Subsequently, the family moved to Montreal so the children could attend better schools.

Upon graduation from Catholic High School in Montreal in 1943, Ralph won Sir Edward Beatty and Robert Bruce scholarships to McGill University, where he took honors courses in pure and applied mathematics. While at McGill, he won two additional scholarships, the Sir William MacDonald Scholarship

and a National Research Council of Canada Bursary. He received a B.Sc. and, after one more year, an M.S., both in applied mathematics.

In 1948, Ralph was offered scholarships to attend graduate school at Rochester University, the University of Illinois, MIT, Cornell University, and Columbia University. He elected to attend Columbia, where he studied under Isidor Rabi and Polykarp Kusch. In 1952, he was awarded a Ph.D. in physics.

After graduation, Sid Millman (a former student of Rabi) was instrumental in bringing Ralph to Bell Labs, where he spent the next 43 years as a researcher. During his career, Ralph made continuous significant contributions to III-V crystal growth, semiconductor physics, and device physics. In several instances, he demonstrated the earliest examples of devices that are now technologically and commercially important. In the late 1950s, he pioneered studies on impurities in silicon (Si) and germanium (Ge) relating the presence of oxygen to defect behavior. One of the earliest workers on III-V compounds, he demonstrated the first high-efficiency red and green light-emitting diodes in gallium phosphide and the first use of such diodes in telephone handsets. His work revealed the promise of light-emitting diodes, which led to their widespread use.

With his co-workers, Ralph demonstrated some of the earliest real optically integrated circuits that incorporated gallium arsenide (e.g., aluminum-gallium-arsenide wave guides, lasers, modulators, and switches). This work laid the groundwork for later studies on shorter wavelengths in the gallium-indium-arsenide-phosphide system.

His early distributed-feedback lasers led to the first terabit

km/s fiber-optic transmission in 1985. Subsequently, Ralph demonstrated monolithically integrated mode-locked lasers operating at 350 GHz and ultra-low-threshold lasers operating at less than 1 mA at the communications fiber wavelength of 1.55 microns. He continued working on the growth of a variety of semiconductor structures, principally for extending the usefulness of semiconductor lasers, until his retirement in 1994. After retirement, Ralph was a member of the National Research Council Microgravity Committee.

Ralph was the author or coauthor of several hundred papers and the owner of 52 patents. He was a fellow of the Institute of Electrical and Electronics Engineers and the American Physical Society and was designated a distinguished member of the technical staff at Bell Labs in 1982. He was elected to the National Academy of Engineering in 1992.

Ralph’s life was not totally consumed with science, however. After he had been at Columbia for about a year, he met Ann Garvey, who had come from Elmira, New York, as a student in a master’s program at Teachers College in New York City. They lived within walking distance of each other, enjoyed the city and friends together, including Ralph’s large circle of friends and colleagues, and after about two years were married in Corpus Christi Catholic Church on the Columbia University campus.

In January 1953, they moved to Morristown, New Jersey, where they lived for the next 43 years. They had nine children, eight of whom survived Ralph. Ann says that Ralph led the equivalent of two lives. He left early for work at Bell Labs but quit at 5:00 p.m. to come home, help with dinner and shopping, and work on projects with the children. He also loved to cook and was good enough at oil painting for friends to ask for his paintings. In repairing a shell lamp one of the children gave them, Ralph began the craft of seashell lamp shades which then filled their home. Somewhere along the way, he also acquired training in classical piano. He was an all-around handyman for their large home, doing painting, electrical installations, and carpentry, as required.

Ralph was also active in his community. He was president of the Morristown Board of Health in the mid-1950s and

chairman of the Democratic Party in Morristown in about 1957. He was also chairman of the Committee of Readers at St. Margaret’s Church, and he organized a Jewish-Catholic dialogue; participating couples met monthly at each other’s homes for more than 30 years.

Ralph’s circle of collaborators was a virtual who’s who in the physics and chemistry of semiconductors and semiconductor devices at Bell Labs. His lunch companions might include Chuck Henry, Franz Reinhart, Jan van der Zeil, Dave Lang, Wan Tsang, Barry Levine, John Bean, Anders Olsen, Henryk Temkin, Venky Naryanamurti, Bob Miller, and me. In the field of semiconductor lasers, with apparent ease, he covered the areas of epitaxial growth, device fabrication, and evaluation. Everybody was important enough to him to warrant his time and attention, and, in return, he asked only that his collaborators give him prompt and accurate feedback.

With his creative mind and unique laboratory skills, he was always at the center of the action. However, those of us who were privileged to know him remember him first as a kind man and a good friend who was always willing to reach out and help with a cheerful attitude and confidence that things would work out if we just kept at them.

Next: Robert W. Mann »
Memorial Tributes: Volume 12 Get This Book
×