Get This Book
Visit NAP.edu/10766 to get more information about this book, to buy it in print, or to download it as a free PDF.
« Previous: Ralph Cross
Page 100 Share Cite
Suggested Citation:"George B. Dantzig." National Academy of Engineering. 2008. Memorial Tributes: Volume 12. Washington, DC: The National Academies Press. doi: 10.17226/12473.
× 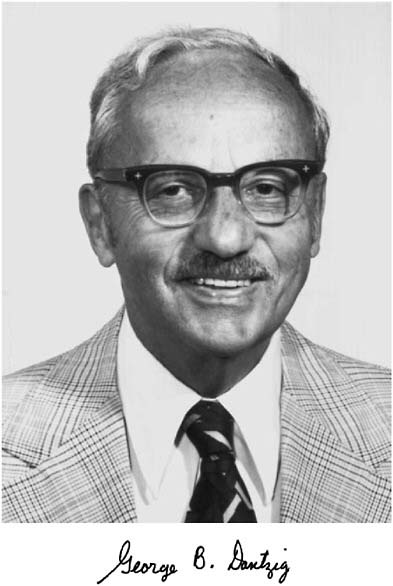 “For outstanding pioneering contributions to the science and practice of operations research.”

BY SAUL I. GASS

GEORGE B. DANTZIG, pioneer in operations research and management science, mathematician, professor, educator, consultant, author, and “father” of linear programming, died on May 13, 2005, at the age of 90, in Stanford, California.

George’s formal education was in mathematics, which reflected his early interest in the subject and the influence of his father, Tobias Dantzig, a mathematics professor. George’s seminal work can be summed up as the recognition and definition of the broad class of practical problems that can be studied as linear programs and the development of the simplex algorithm for solving them. These developments were essential to the emerging field of operations research, which was developed by British scientists during World War II. Linear programming was barely mentioned in early books and reports on operations research, but, before long, it became a mainstay of research methods and applications in the field. An amazing story!

George was elected to the National Academy of Engineering in 1985. He was a fellow of the Econometric Society, Institute of Mathematical Statistics, Association for the Advancement of Science, and Institute of Operations Research and the Management Sciences. He was president of the Institute for

George was born on November 8, 1914, in Portland, Oregon, the first of two sons of Tobias and Anja (Ourisson) Dantzig. Tobias, who was Russian, and Anja, who was Polish, met at the Sorbonne where they both studied mathematics; they moved to Oregon in 1910, where Tobias held a variety of jobs—lumberjack, road builder, housepainter—before he obtained a teaching position at Indiana University. He received his Ph.D. in mathematics there in 1916. He then taught at Johns Hopkins University and the University of Maryland, where he was chair of the Mathematics Department.

In the book More Mathematical People (Simon & Schuster, 1990), George recounts his struggles with ninth-grade algebra and how he became a top student in mathematics and science when he was introduced to geometry, which “really turned [him] on.” The thousands of geometry problems Tobias fed George—to keep him from getting underfoot—helped George develop his analytical power. He attended the University of Maryland, College Park, where he received his A.B. in mathematics and physics in 1936. That summer he married Anne Shmuner and moved to Ann Arbor, where George received his M.A. in mathematics in 1938 from the University of Michigan.

Although he had taken only one graduate course in statistics, he qualified for the Civil Service as a junior statistician, and in 1937, he accepted a job at the U.S. Bureau of Labor Statistics in Washington, D.C. At first, he thought statistics was “just a bag of tricks,” but, after learning many practical applications on the job and becoming familiar with the work of Jerzy Neyman, he changed his mind.

George wrote to Neyman, who had just moved to the University of California, Berkeley, about taking a Ph.D. under his direction. Neyman managed to get him a teaching assistantship, and George and Anne moved west in 1939. In those years, statistics was included in the Mathematics Department, and, although George had taken only two courses in statistics, both from Neyman, his dissertation was in statistics. That was when the George Dantzig “urban legend” originated.

If you search the Web for “urban legend George Dantzig,” you will probably be directed to the URL for “Snopes.com, The Unsolvable Math Problem.” That site recounts how George, coming in late for class, mistakenly thought two problems Neyman had written on the board were homework problems. After a few days of struggling, he turned in his answers. About six weeks later, at 8:00 a.m. on a Sunday morning, he and Anne were awakened by someone banging on their front door. It was Neyman, who said: “I have just written an introduction to one of your papers. Read it so I can send it out right away for publication.” George’s answers to the homework problems were proofs of two unproven theorems in statistics.

The Snopes website tells in detail how George’s experiences ended up as a sermon for a Lutheran minister and the basis for the film Good Will Hunting. The solution to the second homework problem became part of a joint paper with Abraham Wald, who found the solution independently in 1950, unaware that George had already solved it until a journal referee called it to his attention. Neyman had George submit his answers to the “homework” problems as his Ph.D. dissertation.

In June 1941, prior to defending his dissertation, George accepted a job in Washington with the Army Air Force Combat Analysis Branch of Statistical Control. Thus he did not receive his Ph.D. in mathematics from Berkeley until 1946, at which time he was offered a teaching position there. He decided to stay at the Pentagon, however, and become the mathematical advisor to the comptroller of the newly established Department of the Air Force. The deciding factor in his decision was that the salary he was offered at Berkeley was “too little.”

Although he considered the Pentagon a holding place until he found a decent-paying academic position, that job choice started him down a life-changing research path that led to the development of linear programming. Thus, his decision had momentous results: It set operations research on a new course of research and applications, and, more important, it made enterprises and governments everywhere more effective and efficient.

George’s Pentagon colleagues challenged him to figure out how the Air Force could mechanize its planning process to speed up computation of the deployment of forces and equipment, training, and logistical support. Keep in mind that all he had then were desk calculators and IBM accounting equipment. Based on his study of Air Force requirements, he adapted and generalized the structure behind Wassily Leontief’s interindustry model. Thus he was able to state mathematically, for the first time, a wide class of practical and important problems that fell into the newly defined structure of linear programming. This was in July 1947. By the end of that summer, he had developed the simplex method of solving such problems.

In June 1947, the Air Force had established a major task force to work on high-speed computation of its planning process, later named Project SCOOP (scientific computation of optimal programs), with George as chief mathematician. He remained with Project SCOOP until June 1952 when he joined the RAND Corporation as a research mathematician. George’s accomplishments in his research for the Air Force included the first statement of the linear-programming problem and the recognition of its applicability to a wide range of decision problems; the invention of the simplex method (IEEE named the simplex algorithm one of the top 10 algorithms of the twentieth century); the testing and proof of the linear-programming model and the simplex method; the statement and proof of linear-programming primal-dual problems and their relationship via the simplex algorithm; the development of the simplex transportation algorithm; and the establishment of the equivalence between linear-programming and zero-sum, two-person games.

In 1960, George began an illustrious academic career as professor of engineering science and chairman of the Operations Research Center, University of California, Berkeley. He moved to Stanford University in 1966 as professor of operations research and computer science and was appointed to the C.A. Criley Endowed Chair in Transportation in 1973. He retired in 1985 as professor emeritus, but he continued to teach and maintain an active research agenda until the fall of 1997. During his academic career, he authored or coauthored seven books and more than 150 papers.

George’s legacy goes far beyond his research and teaching, however. It includes his friendship, mentoring, and unselfishness with time and ideas. He guided more than 50 Ph.D. students through Berkeley and Stanford.

George was a frequent visitor to the International Institute of Applied Systems Analysis (IIASA), “a non-governmental research organization, headquartered in Laxenburg, Austria, that conducts interdisciplinary scientific studies on environmental, economic, technological, and social issues in the context of human dimensions of global change.” In 1973–1974, he spent a sabbatical year at IIASA as head of the Methodology Group.

For more than 50 years, George’s continuing innovations were of the highest order, and the scientific and economic impacts that have resulted from his work are immeasurable. How does one measure the fact that all major (and most minor) industries directly or indirectly use linear programming to aid them in the allocation of their resources and decision making; that all computer systems (mainframes and PCs) “learn” how to solve linear-programming problems as soon as they are “born”; that the simplex method is imbedded into all PC spreadsheet systems; that national economic planning for the third world and developing countries is being guided by linear-programming techniques; that strategic and tactical military planning, management of military personnel, and a wide variety of logistical (peacetime and combat) problems are solved using linear programming; that mathematical and computer science research such as combinatorics, numerical analysis, and

the solution of large-scale problems have been aided by linear programming; and that such diverse applications as cancer screening, airlines scheduling, agricultural development, transportation and delivery systems, scheduling of personnel, and petroleum refinery operations have been influenced by the work of George Dantzig?

The professional and academic fields of operations research, management science, industrial engineering, as well as the mathematical and computer sciences, rest heavily upon his lifetime of work.

Next: John Larry Duda »
Memorial Tributes: Volume 12 Get This Book
×