Get This Book
Visit NAP.edu/10766 to get more information about this book, to buy it in print, or to download it as a free PDF.
« Previous: Sol Burstein
Page 68 Share Cite
Suggested Citation:"Melvin W. Carter." National Academy of Engineering. 2008. Memorial Tributes: Volume 12. Washington, DC: The National Academies Press. doi: 10.17226/12473.
× 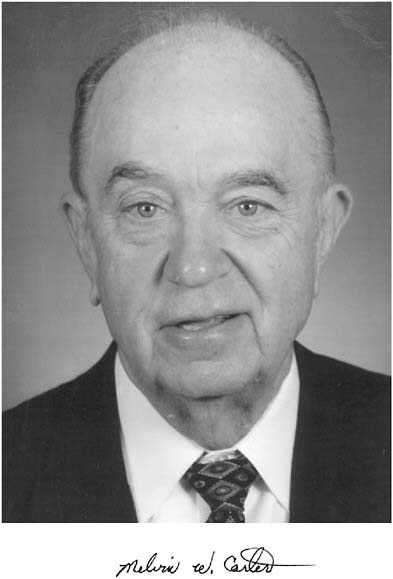 “For leadership and teaching in radiation protection, health physics, and public health standards and practices.”

MELVIN W. CARTER, Neely Professor Emeritus, Georgia Institute of Technology, an internationally recognized health physicist and radiological engineer, died on August 15, 2007, at the age of 80. He was elected to the National Academy of Engineering in 1999 and participated in numerous studies and other activities of the National Academies.

From humble beginnings in East Atlanta, Georgia, Mel Carter built a career based on hard work, perseverance, loyalty, and dedication to his family. As a second-generation American, he understood the need for mentoring immigrants, and he successfully attracted scientists and engineers who immigrated to the United States after World War II to his program.

Born in 1926 in Atlanta, Georgia, to a blue-collar family (his father was a brick mason), Mel was a member of “the greatest generation.” He was raised during the Great Depression and served in the Army Air Corps during World War II. After returning to civilian life and unloading a railroad car with a shovel, he decided to pursue an education so he would not have to make a living “with his back.”

Mel studied civil engineering at the Georgia Institute of Technology and received a B.S. in civil engineering in 1949. Around this time, he married his wife, Anne, who helped him through his graduate education. He earned a master’s degree

Mel joined the U.S. Public Health Service as a commissioned officer in 1951 and worked at the famed Environmental Health Center in Cincinnati, Ohio. Shortly thereafter, he was assigned to Oak Ridge National Laboratory, where he studied the fate of radioactive materials in the environment and the management of radioactive waste. While at Oak Ridge, he was briefly assigned to the Off-Site Safety Program for the Upshot-Knothole Series of nuclear weapons tests at the Nevada Test Site.

He later returned to Cincinnati to work on decontamination and radioactive waste disposal mostly for the U.S. Air Force. In 1955, he was appointed deputy officer-in-charge of the Health and Safety Program established by the U.S. Public Health Service and attached to the Atomic Energy Commission. His responsibilities included serving as off-site radiological safety officer for the nuclear test series conducted at the Pacific Proving Grounds in 1956 and 1958. After receiving his Ph.D. in 1960, he was appointed officer-in-charge/director of the Southeastern Radiological Health Laboratory in Montgomery, Alabama, and later to the same position at the much larger Southwestern Radiological Health Laboratory, in Las Vegas, Nevada, which eventually became the National Environmental Research Center, part of the Environmental Protection Agency (EPA).

Mel had a unique style of leadership—he was soft-spoken but determined. As the leader of multidisciplinary research and operations, he had to understand the needs of investigators in medicine, ecology (including wildlife management), toxicology, farming, chemistry, physics, and various branches of engineering. He knew how to encourage investigators to be creative while responding to the demands of government agencies that had highly visible missions, maintaining an infrastructure, and ensuring the financial integrity of the lab.

After EPA was formed, he became frustrated that legal issues began to dominate the decision process to the detriment of science and public health. So, in 1973, he left the newly formed National Environmental Research Center and returned to his alma mater, Georgia Tech, where he became a professor and director of the Bioengineering Center and later the founding director of the Office of Interdisciplinary Programs. After heading interdisciplinary programs for the government, he now felt very much at home directing interdisciplinary academic programs.

Once Mel got used to academic life, he started to develop programs that survived for a long time. For example, he negotiated with the state of Georgia to set up a state environmental laboratory for radioactive materials at Georgia Tech and organized numerous training courses for teachers, government employees, and others and secured funding for research projects. Upon formally joining the then School of Nuclear Engineering, he taught numerous courses. He found that he enjoyed academia enormously, and he soon became active in a number of scholarly activities. In 1980, he was appointed Neely Professor in Nuclear Engineering and Health Physics, and upon his retirement in 1988, he became Neely Professor Emeritus at Georgia Tech.

Mel was elected a member of the National Council on Radiation Protection and Measurements and served on numerous committees of that organization as well as the Board of Directors. In 1980, he was elected president of the Health Physics Society after having served in numerous capacities in that organization. He was the president of the International Radiation Protection Association, the umbrella organization of the global health physics community.

In 1989, President Reagan appointed Mel to the Nuclear Waste Technical Review Board, which established fundamental criteria for the high-level radioactive waste repository. Because of his familiarity with various aspects of Yucca Mountain, a neighbor to the Nevada Test Site, Mel brought a unique perspective to bear on the board’s decisions. Many years earlier, he had coauthored a paper suggesting that the Nevada Test Site,

where several hundred atomic weapons had been detonated, be used for the disposal of radioactive waste rather than a new site.

Mel participated in a number of peer reviews and scientific assessments by the American Society of Mechanical Engineers, in cooperation with the Institute for Regulatory Science. In 2001, he chaired a panel that reviewed the U.S. Department of Energy’s plans to remedy groundwater contamination as a result of nearly 1,000 “events” at the Nevada Test Site. The panel met in public to report the results of the review. At the end of the meeting, a woman who had been strongly opposed to nuclear energy development said she would sleep better after listening to the panel. Mel also chaired a panel that evaluated certain EPA activities mandated by Congress. Under his leadership, the panel established metrics for evaluating the positive and negative effects of those activities on the environment.

Mel’s election as a member of the National Academy of Engineering followed his participation in a number of National Academies committees, which continued after his election. He was also active in many other professional, humanitarian, and other organizations, published numerous papers, edited several books, and encouraged the publication of useful information.

Mel Carter leaves a legacy of enormous accomplishment. The engineering profession and the nuclear and health physics communities have lost an articulate and effective proponent.

Next: Harold Chestnut »
Memorial Tributes: Volume 12 Get This Book
×