Get This Book
Visit NAP.edu/10766 to get more information about this book, to buy it in print, or to download it as a free PDF.
« Previous: Richard H. Gallagher
Page 128 Share Cite
Suggested Citation:"Ivan A. Getting." National Academy of Engineering. 2008. Memorial Tributes: Volume 12. Washington, DC: The National Academies Press. doi: 10.17226/12473.
× 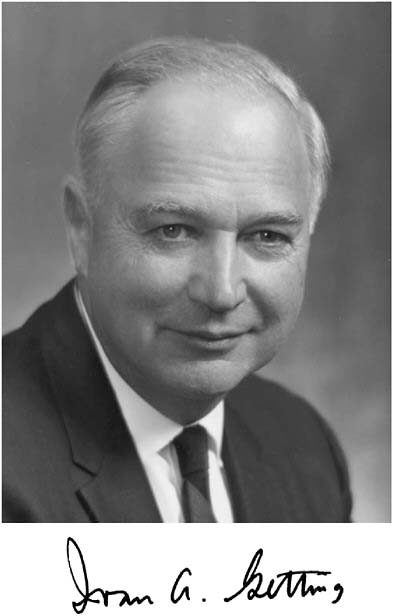 “For development of radar systems and technical weapons; advice to national agencies.”

IVAN A. GETTING, founding president of the Aerospace Corporation and inventor of the global positioning system (GPS) satellite navigation concept, died October 11, 2003, at his home in Coronado, California, at the age of 91. Getting was one of a generation of outstanding individuals who held technical leadership positions from the beginning of World War II until the end of the cold war in the 1990s. His autobiography, All in a Lifetime, is subtitled “Science in the Defense of Democracy,” an apt description of his life and career.

The son of immigrants from Slovakia, Getting was born in New York City on January 18, 1912. He attended grade school and high school in Pittsburgh, Pennsylvania, was an undergraduate at the Massachusetts Institute of Technology (MIT) from 1929 to 1933 as an Edison Scholar, then, as a Rhodes Scholar, attended Oxford, where he received the D. Phil. in astrophysics in 1935. He was a junior fellow at Harvard from 1935 to 1940. A seminal paper written with Arthur Holly Compton in 1935 on possible cosmic-ray anisotropies is still widely cited in the scientific literature for its description of the Compton-Getting effect.

Getting might have had a brilliant academic career, but world events interfered, and he spent the rest of his life working on and advising the government on national defense issues. In 1940, he

returned to MIT, where he headed the Division of Fire Control and Army Radar in the Radiation Laboratory. His group developed the SCR 584 automatic-gunfire control radar that, by controlling proximity-fused antiaircraft artillery, has been credited with destroying 95 percent of the V-1 cruise missiles launched by Nazi Germany during World War II.

After a stint as professor of electrical engineering at MIT from 1945 to 1950, Getting left academia to join the Raytheon Company as vice president for research and engineering. In 1960, he resigned from Raytheon to head the newly created Aerospace Corporation.

Throughout his career, indeed throughout his life, Getting not only held positions that entailed heavy administrative responsibilities but also was an advisor to government on many issues, particularly related to national defense. In 1945, with General Hap Arnold and Theodore Von Karman, he was a founding member of the Air Force Scientific Advisory Board, and he later became the chief scientist of the Air Force. He was a member of the President’s Scientific Advisory Committee for many years and the National Academy of Sciences Undersea Warfare Committee for 25 years. He was also an advisor to NATO.

Getting participated in, indeed led, many technical advances in national defense, such as the development of air-to-air missiles and radar and electronic systems. He was also instrumental in the founding of Lincoln Laboratory at MIT. His longtime membership on the National Research Council Naval Studies Board and its various panels enabled him to play a leading role in the creation of the Polaris submarine-launched ballistic missile system (SLBM).

Many, many honors, citations, and awards were bestowed on Getting in recognition of his numerous accomplishments. His awards included the Presidential Medal of Merit, presented to him in 1948 by President Truman; the Naval Ordnance Development Award (1945); the Air Force Exceptional Service Award (1960); the IEEE Aerospace and Electronic Systems Pioneer Award (1975); the Los Angeles Chamber of Commerce Kitty Hawk Award (1975); the IEEE Founders’ Medal (1989); the

U.S. Department of Defense Medal for Distinguished Public Service (1997); the Navy Superior Public Service Award (1999); the AIAA Goddard Astronautics Award (2001); and, with Bradford Parkinson, the National Academy of Engineering Charles Stark Draper Prize in 2003 for the development of the GPS satellite navigation system. He received honorary degrees from Northeastern University and the University of Southern California.

Getting was an avid sailor both in New England and, later, in southern California. When contending with New England fog and heavy weather, he welcomed the sight of lighthouses. Based on a combination of his intuitive knowledge of navigation as a result of his sailing experiences, his work on navigation and positioning systems at Raytheon (such as MOSAIC [mobile system for accurate ICBM control]), which used time-delay-of-arrival [TDOA] principles, the coming of the space age, the availability of high-flying satellites, and his early engineering work on electronic navigation systems, he conceived of a satellite navigation system that would be the equivalent of lighthouses in the sky. Many individuals and organizations subsequently contributed to the realization of GPS, but Getting came up with the fundamental ideas and had the tenacity to see the development of the system through to completion. He always considered GPS to be his proudest achievement.

Based on his long association with the Air Force and the respect of leaders in government and industry for his technical acumen and integrity, his broad vision and experience, and his superb management abilities, Getting was asked to be the first president of the newly created Aerospace Corporation. He headed the company through its early, critical years

(1960 to 1977) as the nation’s military space program grew to robust maturity. Aerospace was involved in the development of a family of launch vehicles and satellite systems for communication, navigation, weather, and surveillance, as well as several classified missions. Getting also initiated the planning activities at Aerospace that ultimately led to GPS and was intimately involved in the plans to use Air Force rockets, such as Atlas and Titan, to launch American astronauts into orbit aboard the Mercury and Gemini spacecraft.

As the military space program grew, so did Aerospace Corporation. Getting was always aware of the special role of Aerospace in the planning and development of military space systems, and he made a point of meeting for lunch with every newly hired member of the technical staff to explain the company’s mission. He constantly reminded his management team to “hire people at least as smart as you.” Now, almost half a century later, the corporation still bears the strong imprint of Ivan Getting.

Getting was a gregarious, compassionate, and outgoing man. Friends tell of a time when he anchored his boat, the Sirena, at Catalina Island off the California coast, with quite a few people on board for drinks and dinner. It was a miserable night, cold, rainy, and windy. In the midst of the libations, there was a loud crash and the Sirena rolled. A young couple trying to moor their small sailboat, which had no motor, had lost control and run into the Sirena in the foul weather. In the middle of the party, Getting donned his rain gear, got into his dingy, and towed them to their mooring—then invited them to join the party!

With his puckish sense of humor, Getting loved to recount his experiences and describe his encounters with the great—and not so great. He was also an excellent pianist. Overwhelmed each year by innumerable Christmas parties, he decided one year to hold the Aerospace management Christmas party in September to ease the crush. Thus, on a warm southern California September afternoon, he appeared, decked out in a Santa Claus hat, playing Christmas carols on the piano. During breaks in the music, he could be seen showing off his prized orchids and having a great time.

Getting’s love for scientific research continued throughout his life, even when he was immersed in pressing management problems, first at Raytheon and later at Aerospace, or serving as a valued advisor to many branches of government. In his honor, the Board of Trustees of Aerospace Corporation named its research complex the Ivan A. Getting Laboratories.

In the face of some skepticism and opposition, Getting had worked tirelessly to make GPS a reality. After his retirement from Aerospace, as a member of an independent review team for many years, he continued to bring his expertise to bear on improving GPS. His efforts were rewarded as the concept grew from an idea to an operational constellation of many spacecraft and became not only an essential military system, but also a global utility serving millions of users throughout the world.

In March 2004, after his death, the Air Force launched a new member of the GPS constellation, with a plaque mounted on the satellite that will remain in orbit for a thousand years. A fitting tribute to his memory, the plaque reads:

Lighthouses in the Sky Serving All Mankind

Dr. Ivan A. Getting

Getting is survived by his wife, Helen; a daughter, Nancy G. Secker of Green Bay, Wisconsin; and two sons, Ivan C. Getting of Boulder, Colorado. Another son, Peter A. Getting of Iowa City, Iowa, died in 2007.

Next: Kenneth W. Hamming »
Memorial Tributes: Volume 12 Get This Book
×