Get This Book
Visit NAP.edu/10766 to get more information about this book, to buy it in print, or to download it as a free PDF.
« Previous: Alvin M. Weinberg
Page 338 Share Cite
Suggested Citation:"James William Westwater." National Academy of Engineering. 2008. Memorial Tributes: Volume 12. Washington, DC: The National Academies Press. doi: 10.17226/12473.
× 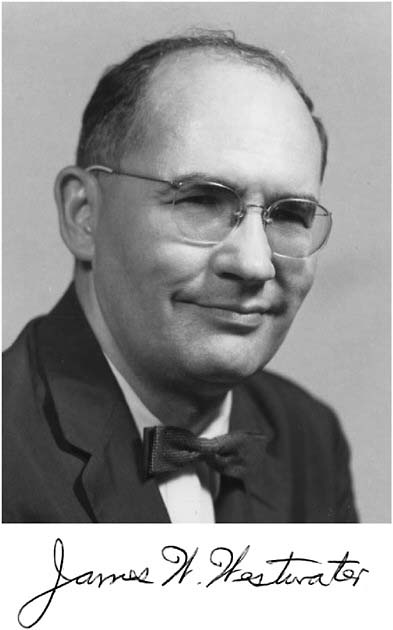 “For contributions to boiling heat transfer by high-speed photography at great magnification.”

BY RICHARD ALKIRE AND THOMAS HANRATTY

JAMES W. WESTWATER, emeritus professor of chemical engineering and a pioneer in the field of heat transfer, died on March 31, 2006, at the age of 86.

The central focus of Westwater’s research was heat transfer accompanying a phase change. His work was characterized by innovative experimentation, careful analysis, and a clear vision of the relationship between fundamental principles and practical applications. He pioneered the use of high-speed photography, and his remarkably precise images facilitated an understanding of the dynamics of bubble formation and growth and led to the development of realistic theories for boiling heat transfer. Westwater’s first film, made in 1954, had 80 showings at companies, universities, technical societies, and on television.

Westwater developed techniques for high- and low-speed photography through a microscope. In subsequent years, he expanded upon these techniques to study nucleate, transition, and flow boiling, flow and drop-wise condensation, freezing, the formation of Bernard cells, and the nature of nucleation sites for boiling and condensation.

These experiments are widely considered to be engineering classics that provided a fundamental understanding of the physical processes governing both boiling and condensation and formed a basis for mathematical development. His work is recognized worldwide as both fundamentally significant and vital to many commercial and other applications.

In 1965, Westwater published the first in a series of papers showing how properly designed fins could greatly increase heat-transfer rates during boiling. This led to experiments showing that remarkable heat duties, as high as 120,000 kw/m3, could be obtained in miniature fins. Westwater’s study of two-phase flow patterns in small passages pioneered the current interest in compact heat exchangers. With his 41 doctoral students, he authored more than 110 publications and produced 19 research motion pictures.

Jim was elected to the National Academy of Engineering in 1974. He also received much well-deserved recognition, including the 1971 Max Jakob Memorial Award jointly from the American Institute of Chemical Engineers (AIChE) and American Society of Mechanical Engineers, the 1966 William H. Walker Award of the AIChE, and the 1974 Vincent Bendix Award of the American Society for Engineering Education. He was selected as one of 30 distinguished chemical engineers who were recognized on the 75th anniversary of the AIChE.

Westwater’s impact at the local, national, and international levels was not just a reflection of his research activities. He was also chairman of the Heat Transfer and Energy Conversion Division of the AIChE in 1963 and chair of the 3rd International Heat Transfer Conference in 1966. From 1968 to 1970, he was a director of AIChE, and he was awarded the 1984 Founders Award from that organization for the advancement of chemical engineering.

From 1962 to 1980, Westwater was head of the Department of Chemical Engineering at Illinois. During that time there was a substantial increase in scholarly contributions and significant expansion of the undergraduate and graduate programs. He was known on the Illinois campus as a skillful administrator and a dedicated teacher who had great empathy for the needs and desires of undergraduates. He impressed upon his many students the importance of a sound understanding of the physical fundamentals of chemical engineering processes as a basis for the development and application of those processes. A professorship in his honor was established by friends and admirers in 1986. He retired in 1988.

James traveled extensively as an invited lecturer and consultant to many foreign countries, including Communist Russia, China, India, and Japan. He and his wife traveled, for business and pleasure, to every continent. Other interests included gardening, reading, swimming, and handball.

Next: J. Edward White »
Memorial Tributes: Volume 12 Get This Book
×