Get This Book
Visit NAP.edu/10766 to get more information about this book, to buy it in print, or to download it as a free PDF.
« Previous: William Herbert Huggins
Page 156 Share Cite
Suggested Citation:"Chalmer Gatlin Kirkbride." National Academy of Engineering. 2008. Memorial Tributes: Volume 12. Washington, DC: The National Academies Press. doi: 10.17226/12473.
× 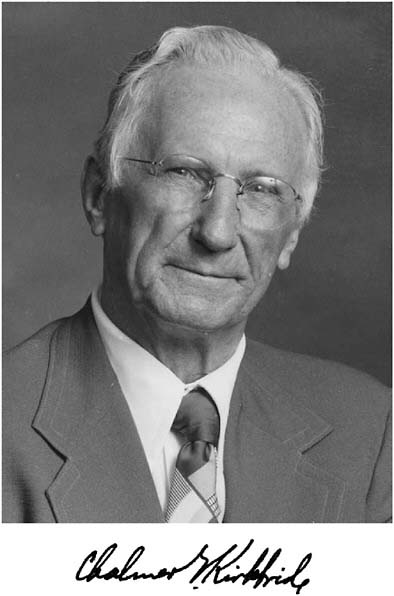 “For development of catalytic cracking and petroleum processes.”

CHALMER GATLIN KIRKBRIDE, engineer, teacher, researcher, author, environmentalist, inventor, and major contributor to our understanding of energy, died on June 16, 1998, at the age of 91. Born on December 27, 1906, near Tyrone, Oklahoma Territory, to pioneer parents, he spent his formative years in the southeast Kansas town of Caney. Kirkbride’s parents were Zachariah Martin Kirkbride, a frontier judge, and Georgia Ann Gatlin, niece of the inventor of the Gatling gun. He went on to attend the University of Michigan, where he received his B.S and M.S. in chemical engineering in 1930.

Most of Kirkbride’s life was devoted to finding efficient ways of extracting and producing fuel to support America’s industrial economy. His first job out of college, in 1930, was as a chemical engineer for Standard Oil Company of Indiana (Amoco), now BP. From 1934 to 1942, as assistant director for research at Amoco’s Texas City refinery, he ran projects to develop a catalytic cracking process and synthetic rubber for the war effort.

While at Texas City, he met Billie Skains, the Galveston woman who became his wife in April of 1939. The couple remained married for 50 years, until Billie’s death, and had one son, Chalmer G. Kirkbride Jr., born in January 1940.

After a brief stint as chief chemical engineer at Mobil Field Research Laboratories, Kirkbride was appointed distinguished professor at Texas A&M University—the first distinguished professorship established by the Texas legislature—where he taught courses in process design in thermal and catalytic processes, fractional distillation, and heat transfer. He also wrote a textbook, Chemical Engineering Fundamentals (McGraw-Hill, 1947), which was later translated into Spanish and Russian and was adopted by more than 80 colleges and universities worldwide.

While at Texas A&M, Kirkbride first entered public service. In 1946, he was asked to serve as a science advisor for the atomic bomb tests at Bikini Atoll, which were expected to produce valuable data on the effects of atmospheric and underwater nuclear explosions. The following year he returned to private industry as vice president for research and development (R&D) at Houdry Process Corporation in Marcus Hook, Pennsylvania. As head of the company’s R&D unit, he oversaw the development and marketing of catalytic processes for refining and processes for manufacturing polyurethane and butadiene. In 1952, as president and chairman of the board, Kirkbride restored the bankrupt company to fiscal health, collecting a backlog of some $20 million in unpaid royalties and building its licensing business back to the point that its corporate parent, Sun Oil Company, could sell the firm. He also started Houdry’s chemical marketing department and established an atomic energy department in its wholly owned subsidiary, Catalytic Construction Company. While at Houdry, he received the first of his more than 22 patents for energy recovery and conversion processes; his last patents were awarded posthumously in 2000 and 2001.

Kirkbride made his most important contributions to the North American energy industry during his 14-year relationship with Sun Oil Company, where he was executive director for the research, engineering, and patent departments from 1956 to 1960 and vice president from 1960 to his retirement in 1970. Under his leadership, research at Sun led to the development of practical ways of recovering oil from Athabascan tar

sands in Alberta, Canada, which led to more patents and the development of a major new source of oil. Research at Sun also led to the development of new processes for manufacturing polypropylene plastic, film, and fiber, which are used today in food-storage containers, textiles, automotive parts, and banknotes.

In 1967, he served as president of the Cecil County Anti-Pollution League in Maryland. Through his efforts, the league prevented the B.F. Goodrich Co. from building docking facilities and a chemical plant on the Chesapeake and Delaware Canal, helping to preserve wildlife and avert potential pollution of the air and water in the upper Chesapeake Bay watershed.

Late in his career, Kirkbride’s efforts focused on reducing America’s dependence on foreign oil. In 1974, he was a member of the Federal Energy Administration’s R&D staff, and from 1975 to 1976 he was science advisor to the administrator of the Energy Research and Development Administration. He delivered speeches to industry and civic groups across the country warning of a looming energy crisis that would be worse than the 1973 OPEC oil embargo and urging investment in domestic energy sources that could be developed quickly, including nuclear power and oil from shale deposits in the Colorado Rockies. His last patents were for environmentally friendly processes for producing oil from shale and tar sands. In 1997 Kirkbride founded the Chattanooga Corporation along with his son and a business associate, Jerold Smith, of Bradenton, Florida, to commercialize these processes. In September 2005, the company announced that it had successfully produced synthetic crude oil from shale and tar sands.

Throughout his career, Kirkbride maintained a keen interest in engineering education. In 1953, he became a member of the Board of Trustees of Pennsylvania Military College (PMC), the predecessor institution of Widener University; he was vice chairman of the board from 1954 to 1970, when he became an emeritus trustee. Kirkbride was instrumental in the fundraising and design of a science and engineering laboratory building at PMC, which was named Kirkbride Hall in his honor when it was dedicated in 1965. When the

Kirkbrides moved from Philadelphia to Washington, D.C., in the early 1970s, they donated their nineteenth-century home in Wallingford, Pennsylvania, to Widener College. Today the Billie Kirkbride House, named in honor of Mrs. Kirkbride, is the official residence of the university president. In addition to his involvement with Widener, Kirkbride maintained close ties with his former Texas A&M colleagues, working with them and with Widener faculty on several consulting projects. He was an avid reader who maintained a library of more than 1,000 technical and research books in his home.

Kirkbride served on the boards of several prominent professional and industry groups, including the American Institute of Chemical Engineers (AIChE) from 1946 to 1948 and 1950 to 1955; he was vice president in 1953, president in 1954, and past president in 1955. From 1947 to 1952, he was treasurer of the Petroleum Chemistry Division of the American Chemical Society. From 1958 to 1969, he was a director of the Coordinating Research Council Incorporated, an industry group organized by Walter C. Teagle of Standard Oil Company of New Jersey and Alfred P. Sloan of General Motors to promote technology sharing between the petroleum and automobile industries; in 1967, he was council president. From 1965 to 1969, he was chairman of the National Security Industrial Association’s Ocean Science and Technology Advisory Committee.

Kirkbride received numerous honors during his long career. In 1967, he was elected to the National Academy of Engineering. AIChE honored him with the Professional Progress Award in 1951, the Founders Award in 1967, and the Fuels and Petrochemicals Award in 1976; in 1983, on the occasion of the AIChE’s Diamond Jubilee, he was named one of “Thirty Eminent Chemical Engineers of America.” In 1964, the Delaware County Chapter of the Pennsylvania Society of Professional Engineers named him Engineer of the Year, and in 1971, the Engineers Club of Philadelphia awarded him the George Washington Medal, the club’s highest honor. Government honors included service on President Richard M. Nixon’s Task Force on Oceanography in 1969 and

a Distinguished Public Service Award from the U.S. Navy in 1968.

His academic honors included an honorary Sc.D. from Beaver College in 1959, a D.E. from Drexel University in 1960, and the Engineering Centennial Medal and an honorary D.E. from PMC College (now Widener University) in 1970.

Kirkbride is survived by his son, Chalmer G. Kirkbride Jr.

Next: Hendrick Kramers »
Memorial Tributes: Volume 12 Get This Book
×